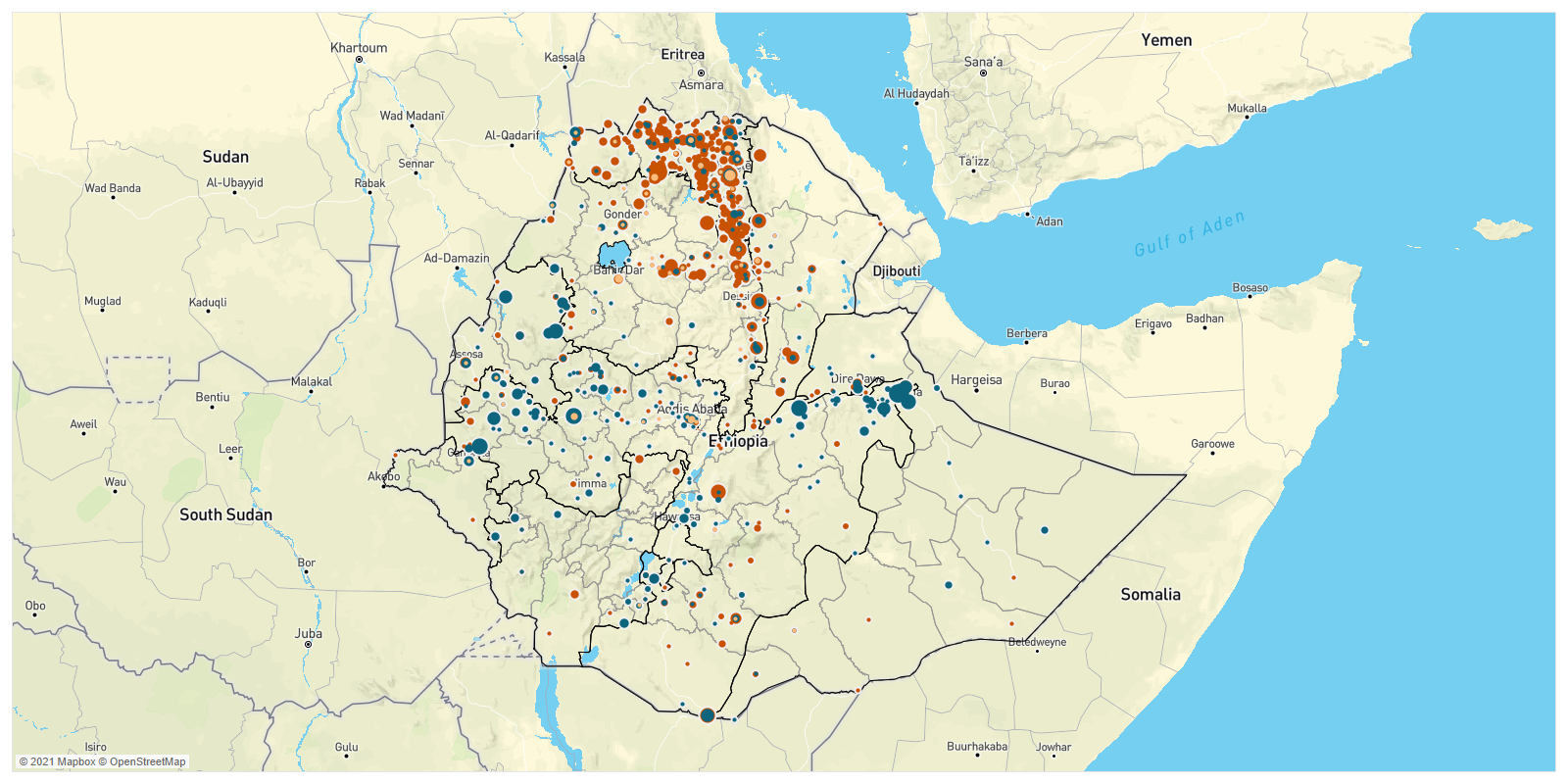 By the Numbers: Ethiopia, 4-10 September 20212Some events from this coverage period might be included in the data in subsequent weeks due to reporting delays. 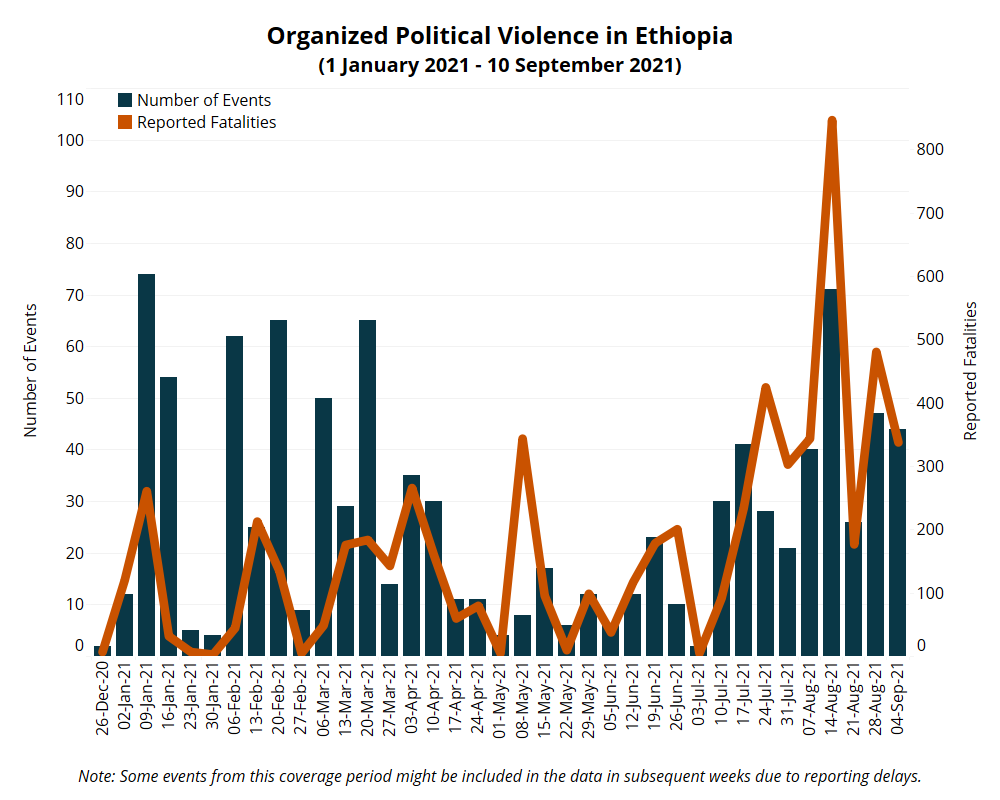 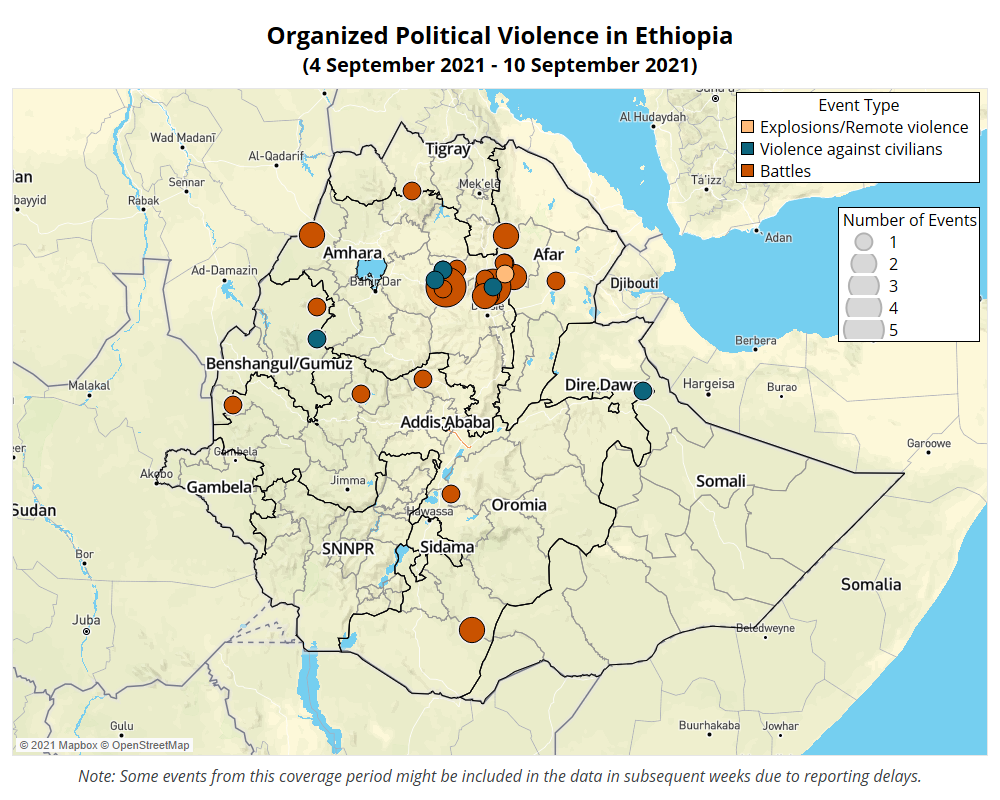 In Amhara region, armed clashes were recorded between TPLF and Amhara regional special force and Amhara militia in Filakit Geregera in North Wello zone from 4 to 8 September. On 4 September 2021, the Republican Guard, which is a branch of ENDF, clashed with TPLF forces in Chobe, Kelelti, Serti, and Kela mountains in Dire Roka. Normally, the Republican Guard is assigned to protect higher officials from any threats and attacks. However, since August 2021, different security sectors of the government have become actively involved in the conflict. Last week, armed clashes between TPLF and ENDF, allied with different regional forces, were recorded in North Wello, South Wello and West Gondar zones.

Clashes in North Gondar and South Gondar zones in Amhara region where the two groups have previously clashed over the last month have subsided. At the beginning of September, the government regained control of some of these areas, allowing reports on the damage caused by the conflict to surface. Last week, it was reported that on 1 and 2 September 2021, TPLF forces attacked the town of Chenna, located five kilometers from Dabat in North Gondar zone, killing at least 120 civilians (Reuters, 9 September 2021). TPLF denied this accusation and asked for an independent investigation (Getachew K. Reda, 8 September 2021).

In the North-Western Tigray zone, clashes between TPLF and the Amhara regional special forces, Amhara militia, and Fano militias continued in Weken area in May Tsemre.

In Benshangul/Gumuz region, attacks by a Gumuz armed group continued. Last week, on 8 September 2021, a Gumuz armed group reportedly shot and killed five security officers (four members of the federal police and one member of ENDF) and two civilians, including a Chinese citizen, in Dangur woreda in Metekel zone. Two more security officers were also injured. The ENDF and regional special forces subsequently attacked the group, killing an unknown number of Gumuz militants. Since July, violence has increased in Benshangul/Gumuz region. For more details on conflict in the region, see the EPO Monthly: August 2021 report.

Ethiopia celebrated its new year last week. Normally, a new year brings hope for the future. However, many are worried about the escalating humanitarian crises due to the ongoing conflict in the north. Until June 2021, the conflict between the federal government and TPLF was contained in Tigray region. After the ENDF withdrew from the Tigray region, the conflict area expanded to the neighboring Afar and Amhara regions. There are also claims that TPLF forces are fighting government forces alongside OLF-Shane and Gumuz armed groups in Oromia and Benshangul/Gumuz regions, respectively.

Furthermore, as the conflict area has expanded to Amhara and Afar regions, the number of people in need of humanitarian assistance has also increased. Different reports which were released last week indicate that farmers in Amhara region were not able to properly cultivate their land due to clashes between TPLF and the government forces. Moreover, TPLF forces reportedly killed the farmers’ cattle in some areas of Amhara region. According to the government, around 400,000 people are internally displaced from Afar and Amhara regions because of the conflict. Another four million people are on the verge of needing humanitarian assistance in both regions (EBC, 6 September 2021). UNOCHA has stated that 1.7 million people are food insecure due to the conflict in both regions (OCHA, 2 September 2021). Last week, the North Gondar zone administration stated that the North Gondar zone is hosting 40,000 internally displaced people (IDP) from the conflict affected areas in Amhara region (Amhara Media Corporation, 6 September 2021). Similarly, the South Wello zone is hosting 233,400 IDP from Wag Hamera, North Wello zones in Amhara region, and from Afar region (ESAT, 6 September 2021).