By the Numbers: Ethiopia, 30 October-5 November 20212Some events from this coverage period might be included in the data in subsequent weeks due to reporting delays. 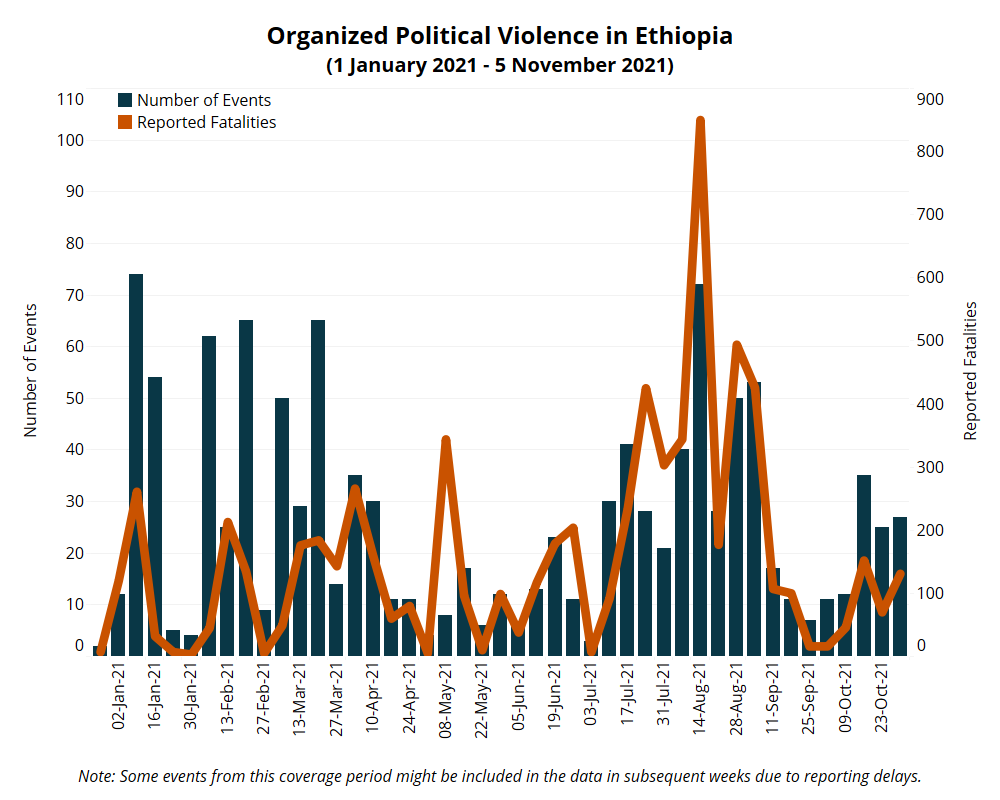 The loss of Dessie and Kombolcha towns in the South Wello zone in the Amhara region to the Tigray People’s Liberation Front (TPLF) forces last week sparked concerns throughout the country that TPLF forces would move further south and threaten the capital city, Addis Ababa, and other locations throughout the country. This led the federal government to declare a state of emergency on 2 November. The following section will further examine the terms of the state of emergency and the ongoing concerns surrounding Addis Ababa.

Throughout the week, the Ethiopian National Defense Force (ENDF), Amhara regional special forces, and Amhara militias continued to clash with TPLF forces in and around Dessie and Kombolcha towns in the Amhara region. On 4 November, the government alliance reportedly regained control of Kobo town in North Wello in the Amhara region and Waja town in the Tigray region — areas that had been held by TPLF forces for several months.

On 31 October, Oromo Liberation Army (OLA, also known as the Oromo Liberation Front (OLF)-Shane) official spokesperson Odaa Tarbii stated that the group’s northern command had moved into Sanbate and Kemise towns of the Oromia special zone in the Amhara region (Odaa Tarbii, 31 October 2021; Reuters, 1 November 2021). Kemise is more than 50 km away from Kombolcha town, and this development created a shared territorial border between areas occupied by TPLF and OLF-Shane forces. On 5 November, OLF-Shane militants and allied TPLF forces reportedly attacked civilians in Kemise in Oromia special zone in the Amhara region, killing an unspecified number of people (EBC, 5 November 2021).

The situation in areas of the TPLF-controlled Amhara region has reportedly reached a critical point. More than 110 people, including women and children, have died due to a lack of food, water, and medicine in the Wag Hamra zone in the Amhara region (BBC Amharic, 5 November 2021), which has been under the control of the TPLF since July. The fate of internally displaced people (IDPs) from North Wello town who took refuge in Dessie town is still unknown after TPLF took control of the town. Dessie town was home to more than 300,000 IDPs before TPLF gained control (Amhara Media Corporation, 22 September 2021). The humanitarian situation in the TPLF-controlled Tigray region is similarly dire, with no humanitarian supplies reaching the area since 18 October 2021 (OCHA 4 November 2021).

Meanwhile, the alliance between TPLF and OLF-Shane is creating political problems between Oromo factions. The OLF party released a statement asking Oromos not to join the government call to mobilize against TPLF attacks, stating that the call is “designed to keep the Prosperity Party officials in power at the expense of human lives” (Oromo Liberation Front-OLF/ABO, 3 November 2021). Instead, the party called for Oromos to strengthen and “solidify the structure of the Oromia National Regional State Transitional Government” (Oromo Liberation Front-OLF/ABO, 3 November 2021). The Oromia National Regional State Transitional Government was created by the OLF party and the Oromo Federalist Congress (OFC) on 25 June 2021 (OLF, 25 June 2021). Furthermore, last week, the party asked TPLF forces “to respect the sovereignty of the Oromo People and refrain itself not to enter into Oromia territory militarily” (Oromo Liberation Front-OLF/ABO, 3 November 2021).

Last week, members of OLF-Shane were accused of abducting 70 people from Anger Gutin town in Gida Ayana woreda in the East Wollega zone in the Oromia region. The abductions come amid heavy clashes between Oromo and Amhara communities in the area which have been ongoing for months. OLF-Shane has also clashed with Oromo regional special forces in a few unspecified rural areas of the West Shewa zone. On 30 October, OLF-Shane also clashed with ENDF in Begi and Kondala woredas in the West Wollega zone in the Oromia region. An unspecified number of people were killed as a result of the clashes. More than 3,000 people have been internally displaced as well (D.W. Amharic, 2 November 2021).

In Benshangul/Gumuz region, several attacks occurred throughout last week. On 31 October, an unidentified armed group ambushed two cars traveling from Gelgel Beles to Chagni around Kar checkpoint, injuring three civilians. The next day, an armed group shot and killed one civilian in Azem Kebele in Bulen woreda. On 2 November, an armed group ambushed three-wheel public transportation (Bajaj) around Aweragodana camp, killing four members of one family. On the next day, two different attacks occurred. In one, an unidentified armed group ambushed a truck traveling from Parzet to Dibate in Manden kebele. Two people were reportedly killed, three were injured, and four were abducted. In a separate event, the Gumz Liberation Front killed three farmers in Parzet. The armed group further attempted to loot more than 100 cattle (Ethiopian Reporter, 7 November 2021). Attacks by Gumuz armed groups are common in the region and it is believed that the above-noted attacks by unidentified perpetrators were carried out by members of various Gumuz armed groups (Ethiopian Reporter, 7 November 2021).

Meanwhile, there were several notable political developments last week. On 3 November, the Ethiopian Human Rights Commission (EHRC) and the UN Office of High Commissioner for Human Rights (OHCHR) released a joint report on human rights violations throughout the early period of the conflict in the Tigray region from 3 November 2020 to 28 June 2021 (OHCHR, 3 November 2021). This report concluded that all parties to the conflict have abused and violated human rights, humanitarian, and refugee law.  While the Ethiopian government accepted the report with “some serious reservations concerning some aspects of the report” (Abiy Ahmed Ali, 3 November 2021), Prime Minister Abiy Ahmed promised to establish an inter-ministerial task force to investigate the allegations, bring the perpetrators to justice, and provide redress and psycho-social support for victims (Abiy Ahmed Ali, 3 November 2021). The TPLF rejected the conclusions of the report, citing the partiality of EHRC. They also claimed the investigation did not involve all stakeholders (Getachew K Reda, 2 November 2021). The Eritrean government responded by claiming the report “provokes a host of critical legal, methodological and factual issues as well as matters of precedence, and, international norms and practices” (Ministry of Foreign Affairs-Eritrea, 3 November 2021).

On 4 November, the US special envoy for the Horn of Africa, Jeffrey Feltman, visited Ethiopia for two days. During his visit, Feltman met with the Minister of Foreign Affairs, Minister of Defence, and Minister of Finance. Feltman asked all conflicting parties to give “peace a chance” and stated that the US opposes “any TPLF move to Addis or any attempt by the TPLF to besiege Addis” (VOA, 3 November 2021).

Weekly Focus: The State of Emergency and the Current Status of Addis Ababa

Last week, as noted, the government of Ethiopia announced a state of emergency after TPLF forces gained control of Dessie and Kombolcha towns. Concurrently, OLF-Shane announced that its forces had gained control of Kemise in the Oromia zone in the Amhara region. These territorial gains created a panic that TPLF forces would move on Addis Ababa, around 235 kilometers to the south. Some international media outlets erroneously reported that Addis Ababa was surrounded by TPLF and OLF-Shane forces (CNN, 4 November 2021; Reuters, 5 November 2021). Government sources claim that their forces, along with allied Amhara regional special forces and militias, are still engaging TPLF forces in areas around the “Dessie Front,” although internet outages have made establishing the exact location of fighting difficult.

TPLF forces are currently active in three Amhara zones of North Wello, South Wello, North Shewa, and Oromia special zones (see map below). They continue to clash with ENDF, Afar regional special forces, and Afar militias in Chifra and Asagita in Awsi-Zone 1. OLF-Shane militants clashed with Oromo regional special forces in a “few unspecified rural areas of West Shewa zone.” The OLF-Shane has previously been most active in Horo Guduru, East Wollega, West Wollega, West Guji, and Guji zones of the Oromia region. While the TPLF and OLF-Shane are not known to be currently active around Addis Ababa at the time of writing, the threat to Addis Ababa and other major cities persists. 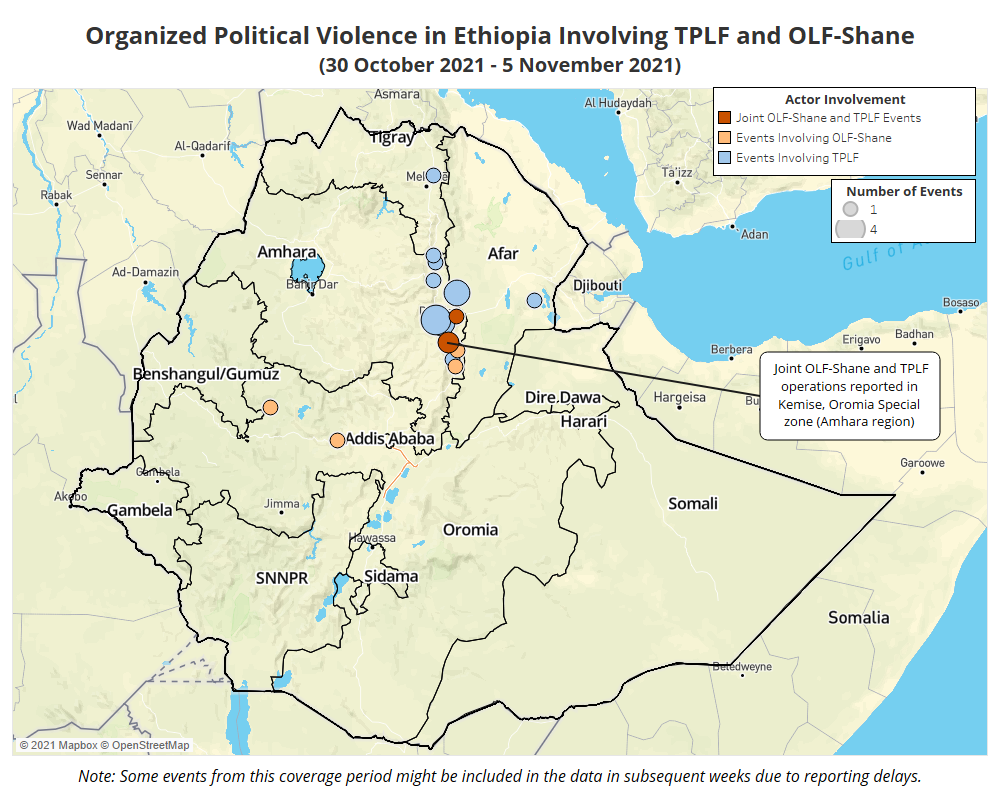 The state of emergency declared by the government on 2 November allows forces to search and arrest individuals without a warrant. It also allows the closing of streets and the partial or full suspension of the administrative governance structure or replacement administrators if there is a security threat (A State of Emergency Proclamation No 5/2021). Under the state of emergency, the government may order anyone with firearms or prior military service to take military training and join military missions or hand over their firearms if they are unable to join the military. Thus far, regional authorities in Southern Nations, Nationalities and Peoples Region (SNNPR), Harari, Amhara, and Somali regions have all enacted a similar order (Ethiopian News Agency, 7 November 2021; Addis Standard, 5 November 2021).

Ethiopians previously lived under various forms of government-declared states of emergency from 8 October 2016 to June 2018 under the previous TPLF-dominated regime. During that time, security forces arrested thousands of people and killed an untold number in detention camps (Al Jazeera, 31 March 2021). The most recent declaration has raised concern from many — including the Ethiopian Human Rights Commission — that the security forces were acting with impunity and conducting arrests “based on identity in connection with the state of emergency” (EHRC, 7 November 2021; Ethiopia Insider, 8 November 2021). Further accusations have been leveled at security forces for specifically targeting ethnic Tigrayans and humanitarian staff (Reuters, 9 November 2021). The government has denied this claim, insisting that only those linked with TPLF are arrested (D.W. Amharic, 8 November 2021). According to the Addis Ababa police commission, police arrested those who celebrated the news of TPLF forces marching to capture Addis Ababa and those with military training, illegal weapons, and fake I.D.s (Fana Broadcasting Corporate, 6 November 2021; D.W. Amharic, 8 November 2021).

Furthermore, the authorities from the Oromia region have blocked roads to stop IDPs from traveling from Wello zones to the capital city, citing security reasons (BBC Amharic, 5 November 2021). Only those with Addis Ababa resident ID cards can travel to the city. Similarly, the administration of Bahir Dar, the capital city of the Amhara region, ordered each IDP in the city to register and stay at the designated refugee camps (Ethiopian Broadcasting Corporation, 8 November 2021). As part of the state of emergency, the government has suspended the issuance of ID cards for the time being.

In addition, last week, NEBE announced its decision on submitted electoral disputes from the September 2021 general election. NEBE decided to recount ballots for Muye Muluqe Constituency (for Somali Regional Council) and to hold new elections in 13 polling stations (for Somali Regional Council) in Jigjiga Town Constituency in the Somali region (NEBE, 2 November 2021). In SNNPR, NEBE decided to hold new elections in Lemo 1 and Meseqanna Mareqo 2 Constituencies (for House of Representatives and for Regional Council) due to the intimidation and harassment that occurred on election day. This will be the third rerun of the election for Meseqanna Mareqo 2 Constituency (NEBE, 2 November 2021). However, it is unknown when these elections will be held due to the state of emergency.