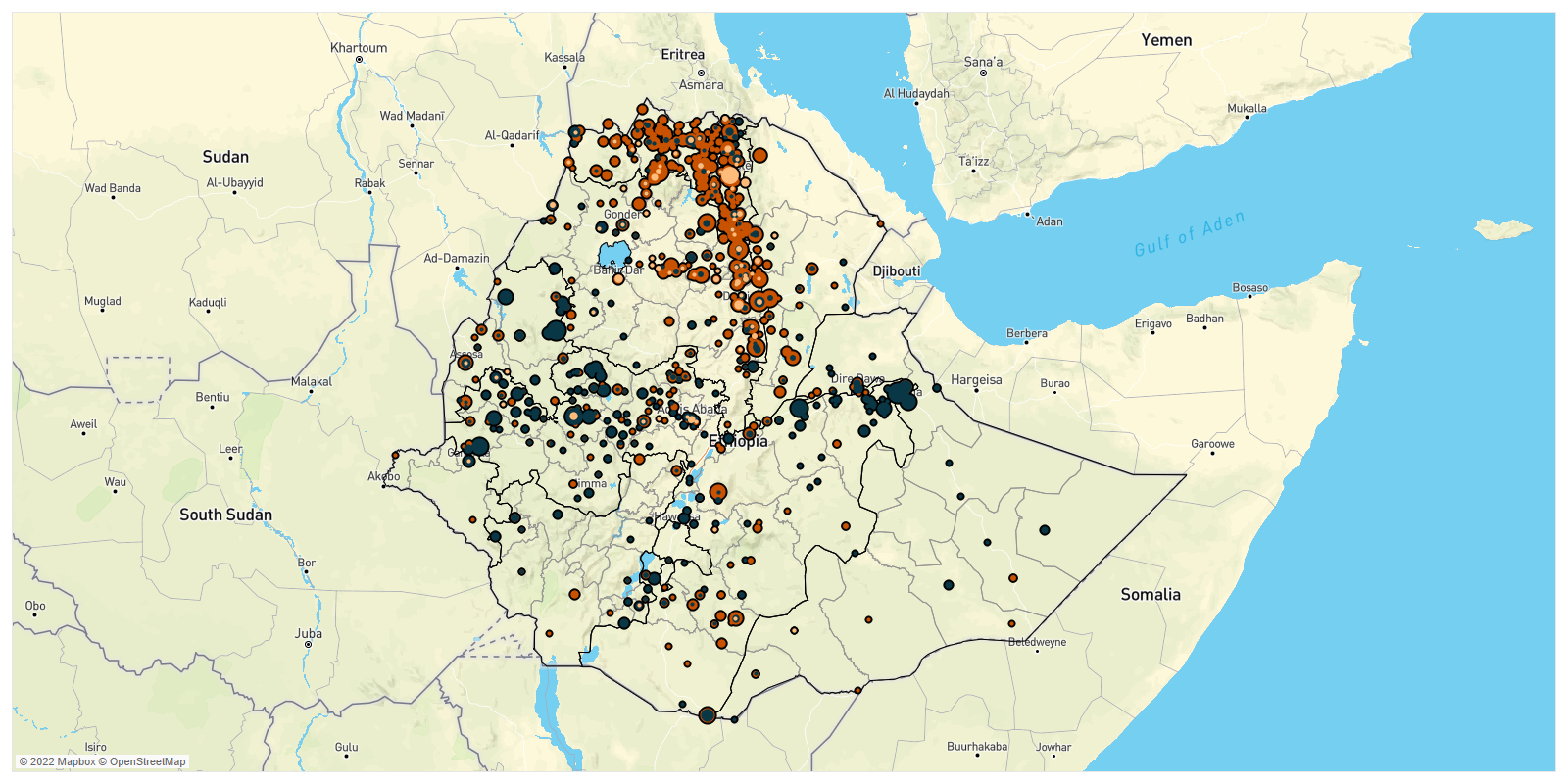 By the Numbers: Ethiopia, 8-14 January 20222Some events from this coverage period might be included in the data in subsequent weeks due to reporting delays. 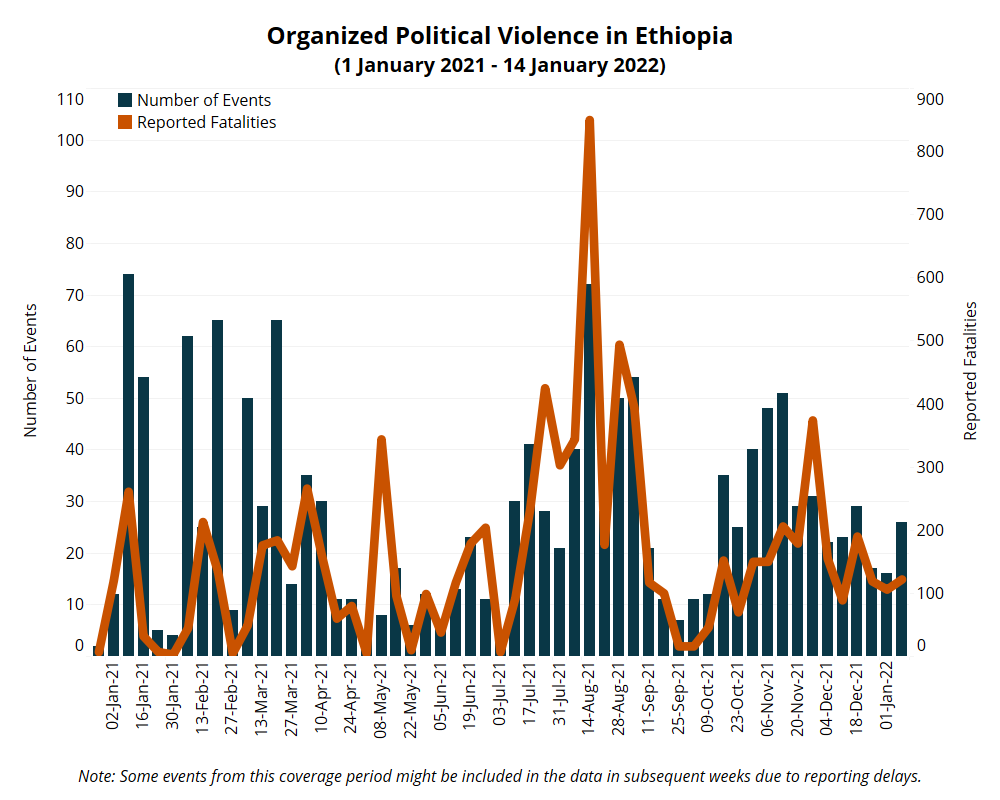 Last week, clashes between Oromo Liberation Front (OLF)-Shane and government security forces continued at a heightened level throughout Oromia. Battles were reported in Chobi and Nono areas of West Shewa zone, in Horo Buluk and Abe Dongoro woredas of Horo Guduru Wollega zone, and in Wadera and Gura Dole Woredas in Gujji zone. Government forces have ramped up efforts against the insurgents since the conflict on the ground in Ethiopia’s north calmed down in December 2021. During the week, government security forces reportedly arrested OLF-Shane militants in both Harar and Dire Dawa cities, including a top leader of the group named by security forces as Jal Oda Kebso.

In the Benshangul/Gumuz region, forces associated with the Tigray People’s Liberation Front (TPLF) battled Ethiopian National Defence Forces (ENDF) and Benshangul Gumuz region special forces in areas near Gemed and in Sedal Woreda, in what government sources described as an attempted border incursion. While government sources identified those fighters as being part of the TPLF, it is most likely that they were fighters from the Benshangul People’s Liberation Movement (BPLM), which is aligned with the TPLF as part of the recently formed United Front of Ethiopian Federalist and Confederalist Forces. BPLM fighters often cross back and forth through Sudan’s porous border with the Benshangul Gumuz region.

Meanwhile, airstrikes by the Ethiopian government continued to account for a large proportion of the violence occurring in the Tigray region (see figure below). At least two airstrikes were reported during the week in the Tigray region. The first strike killed 17 civilians in May Tsemre in North Western Tigray (Reuters, 11 January 2022). The second strike hit the Technical Vocational Education and Training institute in Mekelle, killing three men (France 24, 14 January 2022). 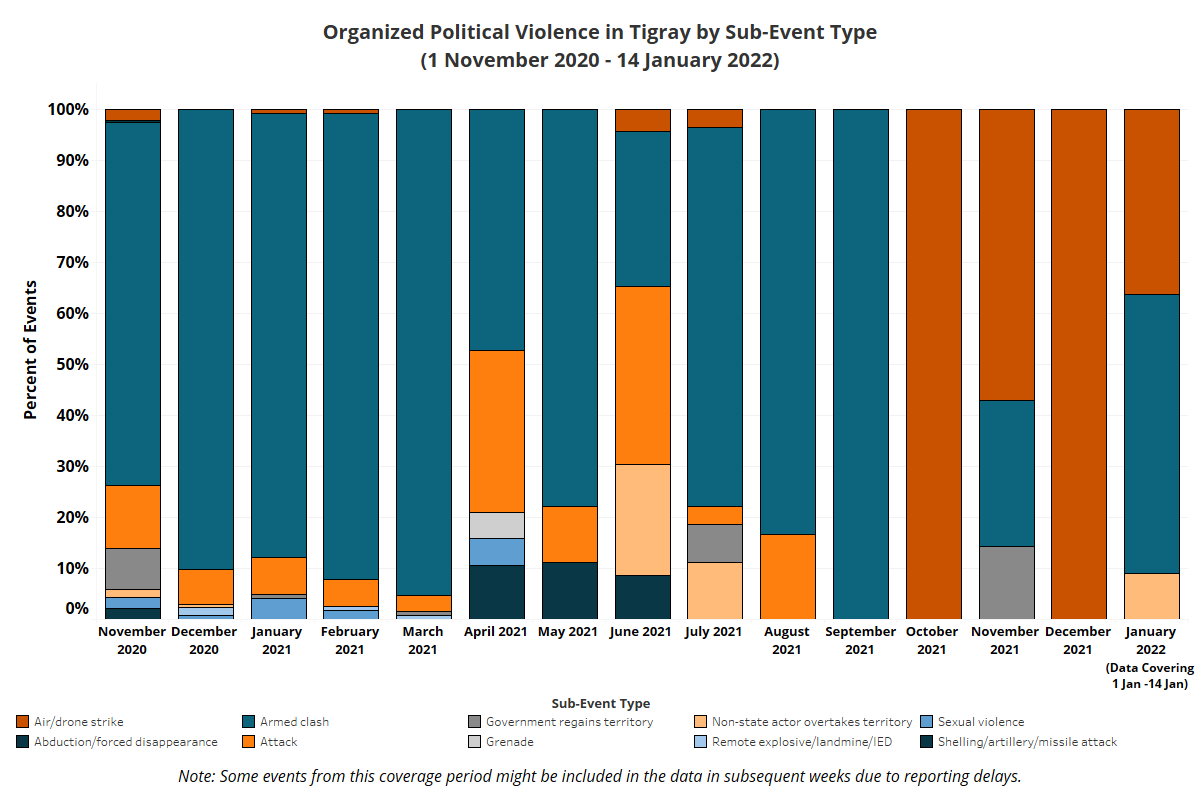 On 13 and 14 January, TPLF forces shelled Abala town, located in Afar region near the Tigray region border. Additional clashes between the TPLF and government forces and their associated Amhara militias were reported in Sekota and Abergele woredas of Wag Hamra zone (Amhara region). More information about the continued clashes will be included in the weekly focus below.

Weekly Focus: What is hindering negotiations between the TPLF and the Ethiopian government?

The ongoing fighting over contested territory in Tigray, Afar, and Amhara regions continues to frustrate options for dialogue between the TPLF and the Ethiopian federal government. Despite a TPLF claim that it had withdrawn from Afar and Amhara regions in a “decisive opening for peace,” fighting continued throughout the week in Abergele and Sekota woredas of Wag Hamra zone, and in Adi Arkay of North Gondar zone (DW Amharic, 10 December 2021). TPLF forces likewise shelled Abala town of Afar region for at least two days last week, delaying humanitarian convoys traveling to Tigray region via the Semera-Abala-Mekelle road (UNOCHA, 13 January 2022).

Government forces have likewise done little to facilitate a cessation of hostilities. Despite claiming that the ENDF would not advance into the Tigray region – and announcing a national dialogue – government-allied forces were reportedly clashing with TPLF troops throughout the week in the Waja and Timuga areas of Raya Alamata, Southern Tigray zone. At least two airstrikes were conducted by the Ethiopian air force in areas far from the front lines, as covered in the situation summary above. Amhara regional government forces are currently in control of the Western Tigray zone, which fell under the jurisdiction of the Tigray regional state prior to the outbreak of the conflict in November of 2020.

Experts agree that a cessation of hostilities agreement must be established before any type of negotiation or peace-building process could begin (Al Jazeera, 9 January 2022). There is, however, a sense that whichever party enters negotiations in control of a contested territory may be at a bargaining advantage. Thus, the underlying cause for protracted conflict at this moment is primarily territorial and fighting is likely to continue while both sides are militarily able. The issue of territory in the Western Tigray zone is driving the conflict as much today as it did at the outset of the war in November 2020. Western Tigray was taken by forces from the Amhara region at the outset of the conflict, and the Southern Tigray zone is controlled by the TPLF but includes territory (Raya) claimed as the ethnic homeland for Amhara (Wello).

There are issues of public support as well. Announced pardons of some captured TPLF leaders provoked angry reactions from sectors of the public who want justice for crimes committed during the conflict in Afar and Amhara regions from July to December last year (DW Amharic, 10 January 2022). The public in the Amhara region expressed distrust of the prime minister during mass protests in the Amhara region in April last year; government officials know that engaging in talks with the TPLF over contested territory would risk deteriorating the already fragile alliance of the Amhara and Oromo wings of the Prosperity Party (PP). For more information, see the EPO Monthly: April 2021 report on the Amhara protests in the spring of 2021 and how they signaled tension between the Oromo and Amhara wings of the PP.

There is a similar issue in the Tigray region. Invading Eritrean forces and crimes committed by Ethiopian troops during their occupation of Tigray garnered support for the TPLF cause and drove anti-government sentiment to new heights. The Tigrayan public wants justice for crimes committed during the first phase of the war, for the displacement of ethnic Tigrayans from the Western Tigray zone, and for the killing of civilians in government airstrikes. The TPLF and its armed forces are the only political vehicle in Tigray that is realistically able to advance this goal. As the government has designated the TPLF a “terrorist” organization, it is unlikely that it will be invited to participate in the upcoming national dialogue.

The United States has dispatched a new Special Envoy for the Horn of Africa who will “encourage government officials to seize the current opening for peace by ending the airstrikes and other hostilities” (Reuters, 15 January 2022). However, in the absence of a guarantee of safety for either population should they cease fighting, clashes between TPLF forces and government troops will likely continue until one side gains uncontested control over both Western and Southern Tigray zones. Both sides are equally responsible for the continuation of hostilities, and although clashes have calmed in recent weeks, the conflict is far from over.