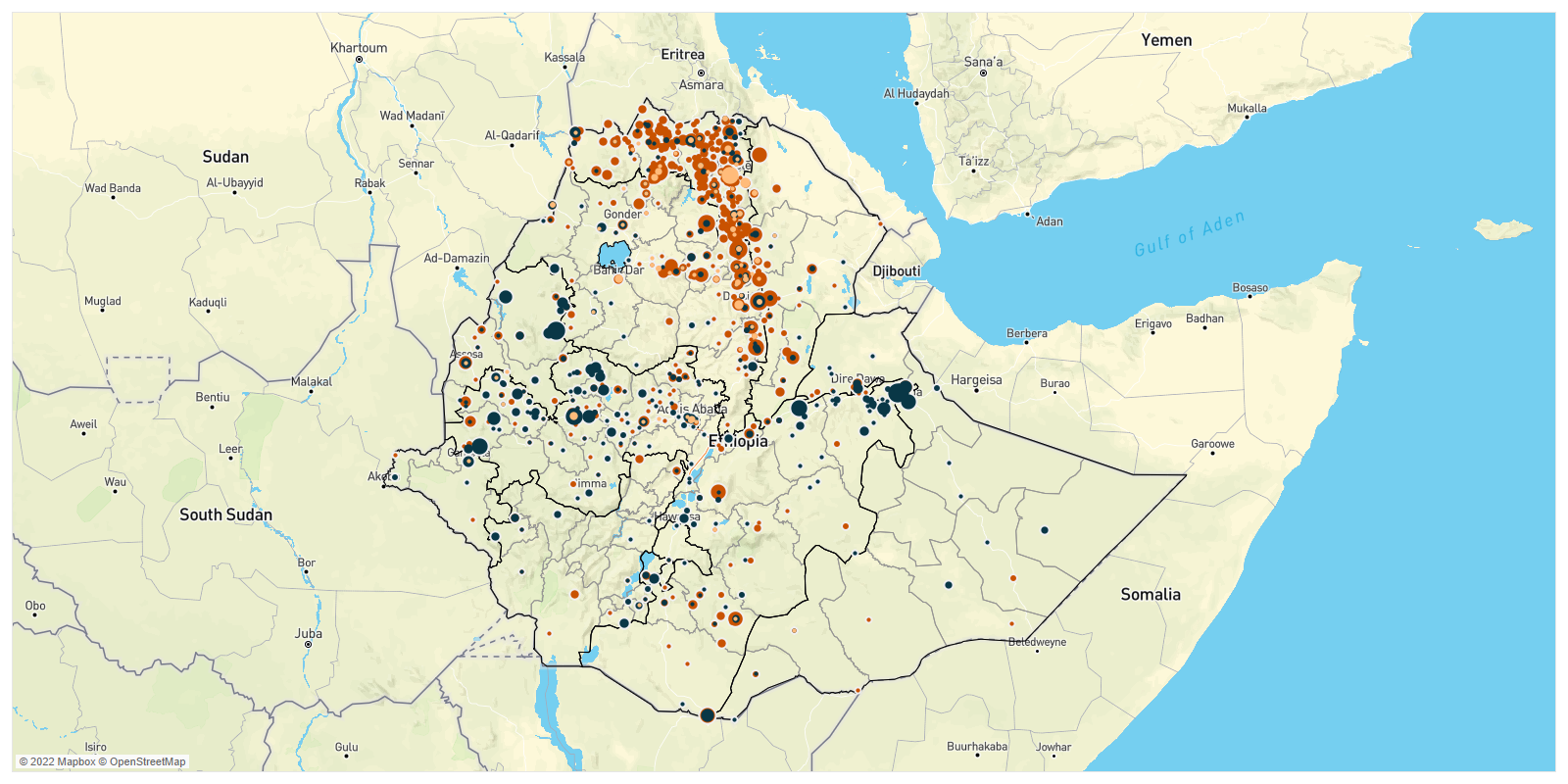 By the Numbers: Ethiopia, 22-28 January 20222 Some events from this coverage period might be included in the data in subsequent weeks due to reporting delays. 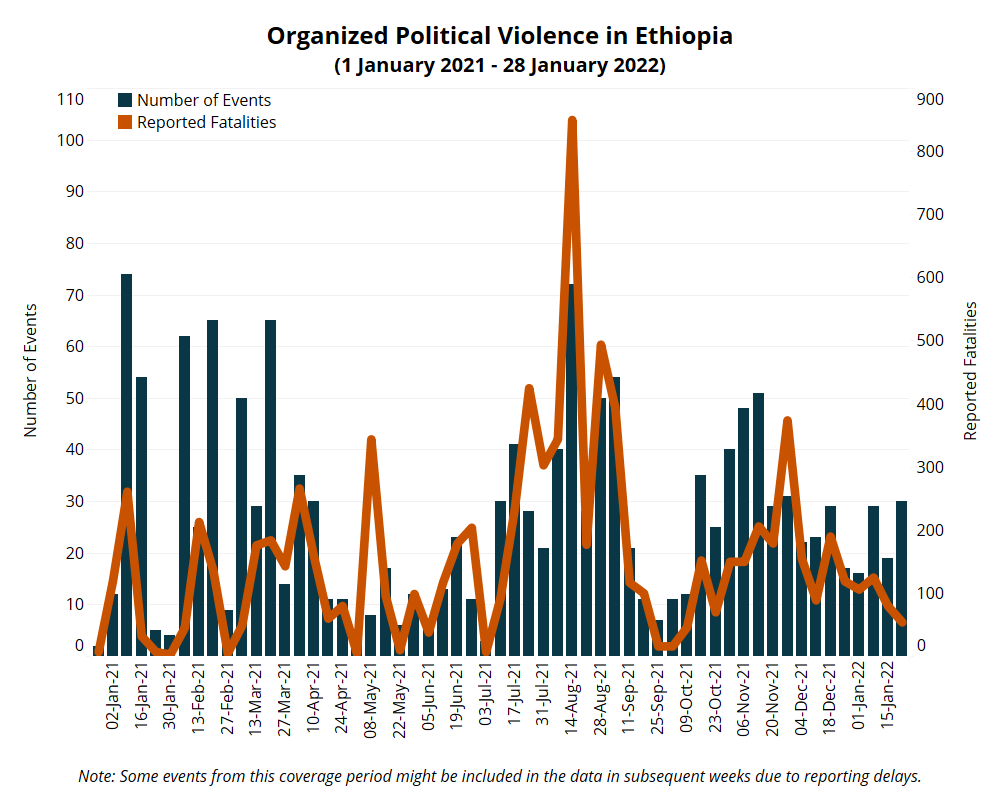 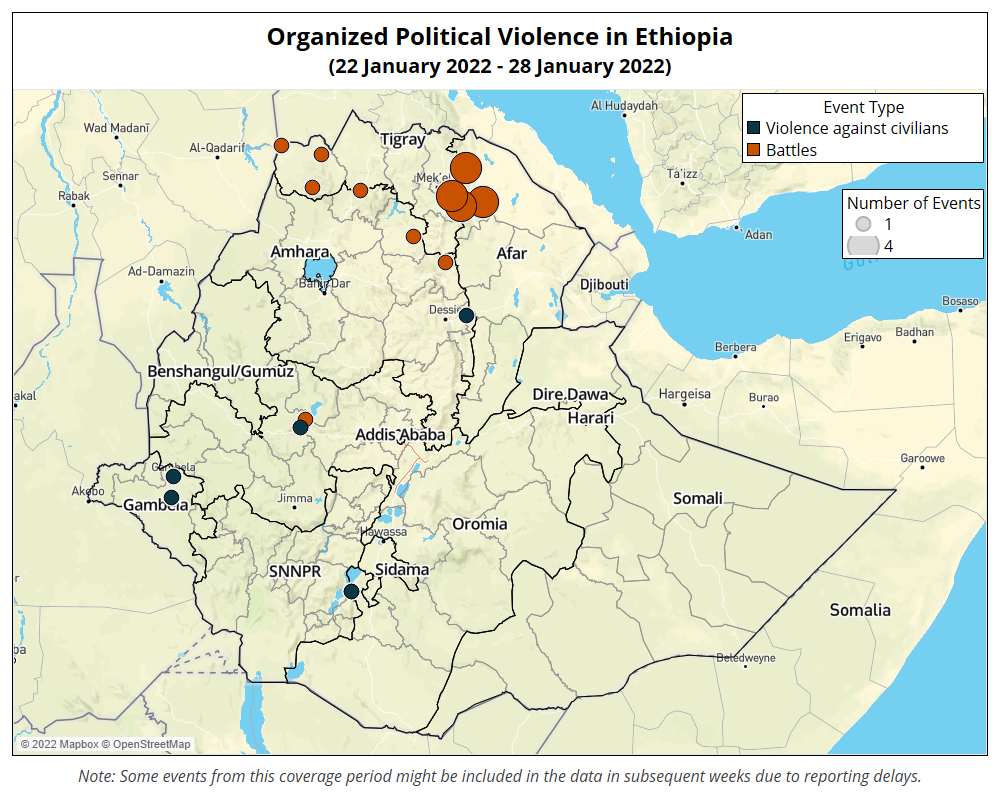 TPLF forces also attacked civilians in Waja, Temuga, and Alamata areas in the Southern Tigray zone in the Tigray region last week (VOA Amharic, 27 January 2022). Amhara residents of these areas have fled and are taking refuge in Kobo town in the Amhara region. Ethnic Rayas residing in these areas have historically expressed a desire through demonstrations and written demands to the government to be administered by the Amhara regional government (Addis Standard, 22 October 2018; Borkena, 9 September 2018).

Last week, armed clashes between Oromo Liberation Front (OLF)-Shane and government forces continued in the Oromia region. Violence against civilians was also reported. On 23 January, members of OLF-Shane abducted five students and a businessman in the Bafano area of Gobu Seyo woreda in the East Wollega zone as they traveled en-route from Addis Ababa to Asosa, Benshangul/Gumuz. The next day, ENDF, federal police, and Oromia regional special forces carried out a joint military operation against OLF-Shane in Ago (Gobu Seyo woreda) to rescue the kidnapped civilians (Addis Maleda, 24 January 2022). It is not clear whether the civilians were rescued or not.

Also in the Oromia region, in the West Gujji zone, clashes intensified as OLF-Shane forces took control of Torre and Shamole towns and clashed with security forces in Kersa and Jebe Sire in Gelana Woreda (VOA Amharic, 28 January 2022).

Several extrajudicial measures were taken against people suspected of supporting OLF-Shane last week. On 25 January, federal police forces shot and killed two civilians in Gure kebele in Bati town in Oromia special zone in Amhara region, after accusing them of hiding members of OLF-Shane. On 24 January, the Oromia regional government called on youth who have joined OLF-Shane to surrender (Fana Broadcasting Corporate, 24 January 2022). The Oromia special zone administrator in the Amhara region reported last week that over 1,000 people have been arrested under suspicion of collaborating with OLF-Shane and “instigating violence” in the zone (DW Amharic, 27 January 2022). It is not clear over what time period the arrests were conducted. In November 2021, both OLF-Shane and TPLF regained control of some areas of the zone during which time more than 260 civilians were killed, according to the zone’s administration officials (DW Amharic, 27 January 2022).

Weekly Focus: Ethiopia to lift the State of Emergency

On 26 January, the Ethiopian Council of Ministers submitted a resolution to the House of Representatives requesting that Ethiopia’s state of emergency, which was declared on 2 November 2021, be lifted. In a reference to recent territorial gains by the federal government,  the Prime Minister’s office stated that “the situation that made it necessary to declare the state of emergency….has changed” (Office of the Prime Minister- Ethiopia, 6 January 2022). Although the resolution has yet to be approved by Ethiopia’s House of Representatives, the declaration has had an immediate impact on the economy. Ethiopia’s sovereign bonds market responded to the announcement with an immediate rally, making them the “best-performing sovereign debt in emerging markets this year” (Bloomberg, 31 January 2022).

Even if the House of Representatives approves the resolution and the state of emergency is lifted, Ethiopia is still very much at war. As detailed above, daily clashes against TPLF forces are occurring in both Afar and Amhara regions, while in the Oromia region, the government is struggling against an ongoing insurgency. The TPLF holds territory in Wag Hamra and North Gondar zones in the Amhara region and in Kilbati Rasu-Zone 2 in the Afar region, in addition to all of the Tigray region (minus Western Tigray zone). While OLF-Shane forces do not hold any major towns, they have complicated efforts to govern throughout the western and southern Oromia region by attacking civilians, closing roads, and looting both private properties and government institutions. Thousands of people are still displaced throughout the country.

The government is facing other challenges as well. There are deeply contested discussions regarding the future of irregular Amhara militias (Fano) raised by the region to combat the TPLF during the war (Fana Television, 28 January 2022; Reuters, 21 January 2022). While irregular militias raised by authorities in the Amhara region were armed and trained for the purpose of combating the TPLF, they often have deeper ambitions. Disarming or absorbing these militias into the federal armed forces or regional special forces is hotly contested – a dynamic covered in the EPO Monthly: December 2021.

Compounding this problem, as a result of the war and increased demand for weapons, non-official channels have been expanded and arms smuggling has reached a critical height throughout the country (EBC, 1 February 2022). As well, as a result of instability and a weakened Birr against the dollar, food prices have risen dramatically (as much as 40%), contributing to rising inflation (Business Insider Africa, 25 January 2022).

For some, though, the potential lifting of the state of emergency has been viewed as a sign that the country will return to normal. This is especially true for the thousands of people arrested under enhanced security protocols. In a statement, the Ethiopian Human Rights Commission called the resolution “encouraging” and urged the release of prisoners detained by the federal government during a state of emergency (Ethiopian Human Rights Commission, 26 January 2022). The federal government has already released several high-profile prisoners in anticipation of a national dialogue set to occur sometime this year (New York Times, 7 January 2022).

Ethiopia’s latest state of emergency was declared as TPLF forces were advancing rapidly toward the capital, Addis Ababa. While the threat to the federal government was removed with the TPLF’s retreat back to the Tigray region in December 2021, ongoing clashes along the Afar and Amhara regional borders with Tigray are evidence that Ethiopia is far from moving past its current political crisis. However, the relaxing of emergency powers and the release of prisoners is a welcome sign.