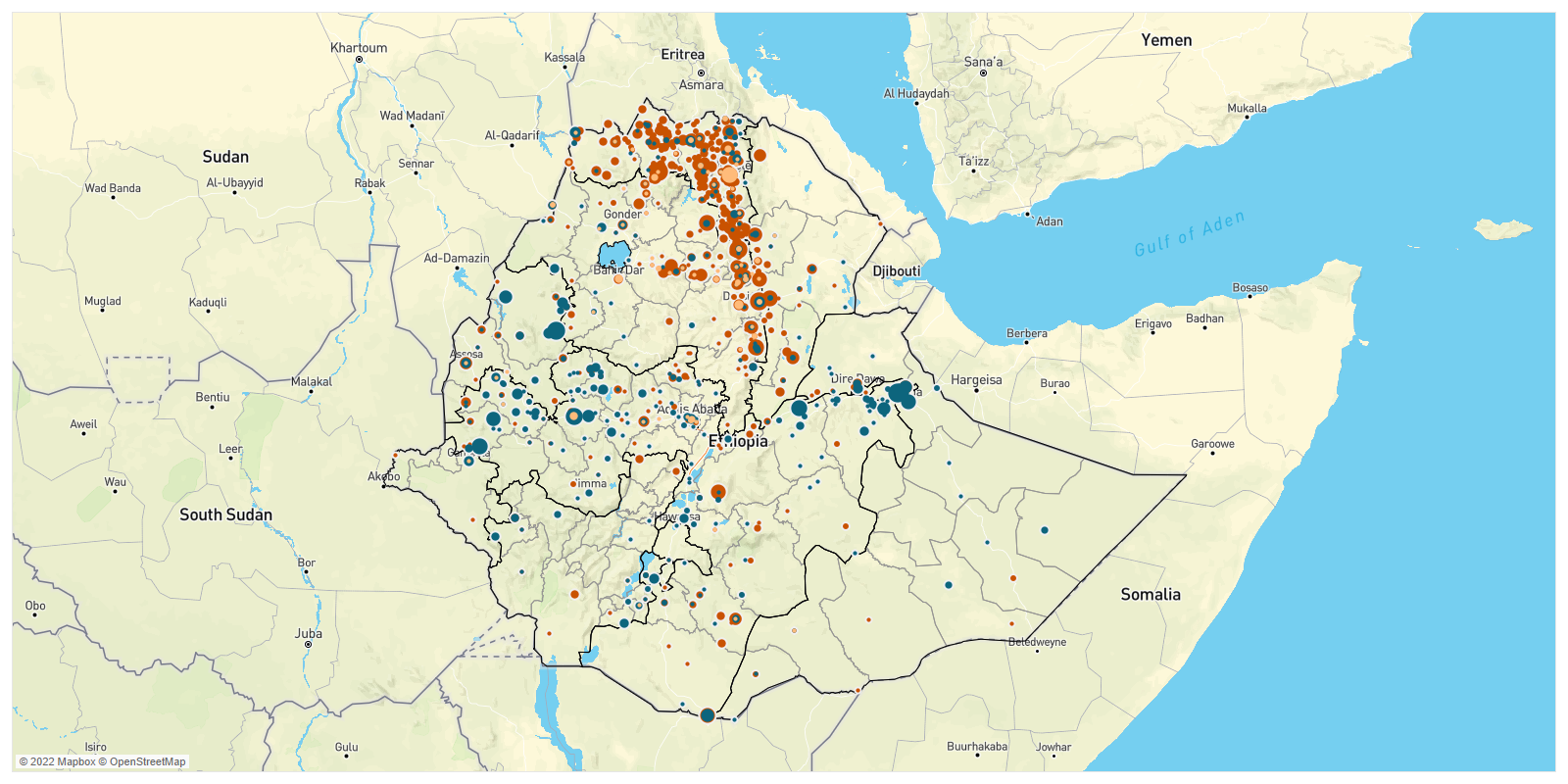 December at a Glance 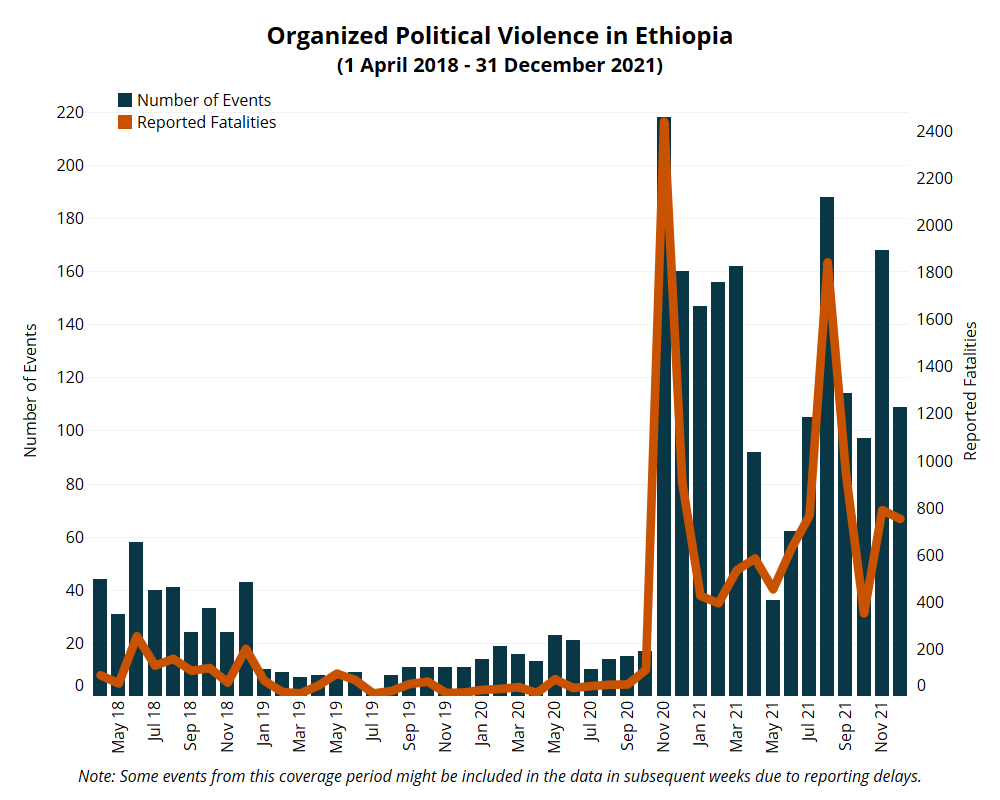 Throughout December, forces allied with the federal government consolidated control over several areas of both the Amhara and Afar regions. As federal troops moved northward, intense clashes were fought with TPLF forces in several areas surrounding Gashena in North Wello in the Amhara region (see map below). Some locations in the Wag Hamra zone (Amhara region) and Kilbati-Zone 2 (Afar region) remain under TPLF control (DW Amharic, 21 January 2022). Prime Minister Abiy Ahmed returned to Addis Ababa following a “successful completion of the first phase of the operation” (Office of the Prime Minister-Ethiopia, 8 December 2021).

The TPLF engaged in widespread looting and property destruction, sexual violence, and other forms of violence against civilians early in December. Wollo University, the Lalibela airport, Kombolcha industrial park, and numerous hospitals and health outposts were all damaged. A recent estimate by the Amhara regional government indicates that as many as 548 civilians were killed by TPLF forces while they occupied areas of the South Wollo zone (VOA, 18 January 2022). 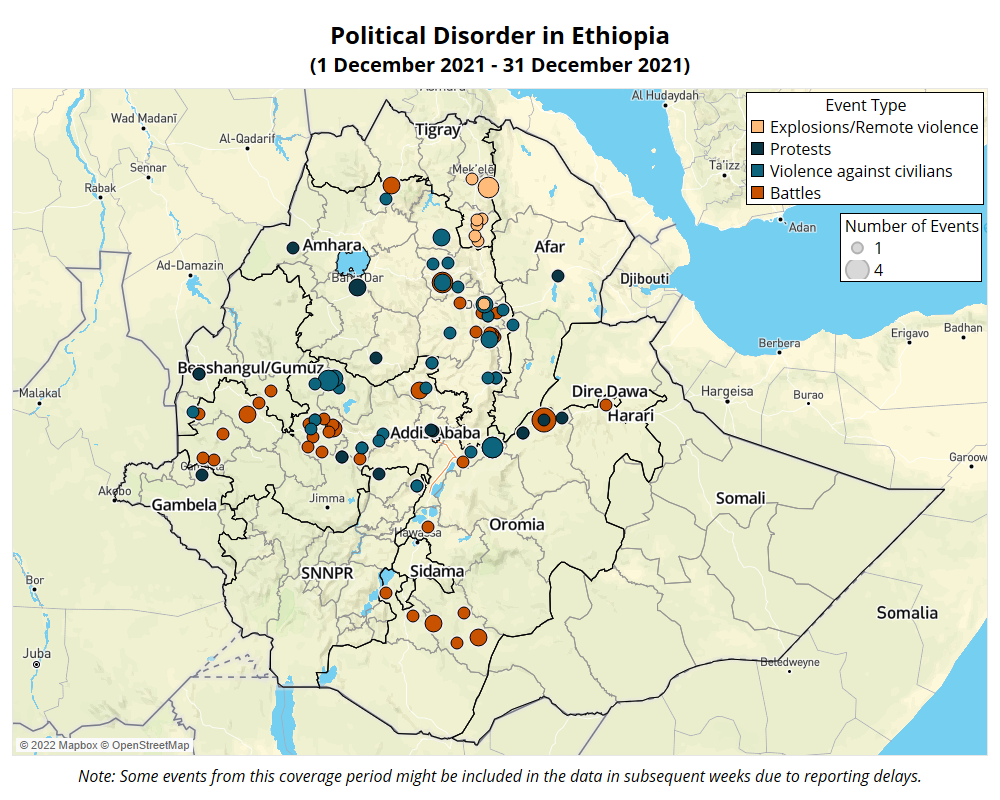 Meanwhile, armed clashes between OLF-Shane militants and government forces have been deadlier in December, with the rebel group intensifying its operations in areas with previously limited activity such as in the North Shewa zone. The group has increased its activity in Eastern Wollega, Horo Guduru, and North Shewa zones over the past few months. Conflict continued throughout December in rural locations throughout southern and western Oromia, displacing thousands of people (DW Amharic,12 January 2022). Clashes also spread to eastern Oromia (Mieso). See the EPO Weekly: 11 December 2021 – 7 January 2022 for more information about increased activity involving OLF-Shane.

Government airstrikes in the Tigray region have also increased since the TPLF withdrawal from Afar and Amhara regions. At least six airstrikes were reported in the Tigray region in December, which reportedly resulted in civilian fatalities (UNOCHA, 30 December 2021). Due to the difficulty in confirming conflict-related fatalities in Tigray, it is unknown how many fatalities occurred across all airstrike events. Lieutenant General Yilma Merdassa, head of the Ethiopian Air Force, stated that the airstrikes did not target civilians and instead accused the TPLF of forcing civilians to shelter in known military camps (Amhara Media Corporation/English, 22 January 2022).

After making rapid advances for several months toward Addis Ababa, the TPLF has abandoned plans to attack the capital and has withdrawn its forces back to the borders of the Tigray region. In response to government claims that the TPLF retreated unwillingly, leaders of the group declared that their “bold act of withdrawal” was an indication of their openness to peace. The move was welcomed by some members of the international community (DW, 10 December 2020). However, continued fighting on the borders of Tigray region and Afar and Amhara regions – and a recent declaration by the chief of staff of the Ethiopian army that Ethiopian forces would indeed enter Tigray again – suggests that negotiations will not occur and the war is likely to continue for a second year (EBC, 20 January 2022).

Although the conflict is not likely to end any time soon, the escalation of clashes during the TPLF’s march southward and its subsequent retreat has transformed the dynamics of the conflict in several ways. The high-intensity fighting also revealed the strengths and weaknesses of both warring factions that will continue to influence the conflict in the coming months.

From July to December 2021, the Ethiopian military was on its back foot, having suffered a loss of both equipment and manpower following a crippling advance by the TPLF from remote areas of the Tigray region (New York Times, 12 October 2021). Facing disaster, Abiy hastily withdrew what remained of the weakened ENDF and spent weeks modernizing and rebuilding the federal army (Reuters, 22 December 2021; EBC, 22 January 2022). As federal troops withdrew to regroup, a large portion of the fighting was left to the forces of the Amhara and Afar region. The Ethiopian military in its weakened state was only able to maintain control of the critical Mille corridor to the east, and the Humera corridor to the west, leaving room for TPLF forces to expand southward toward Addis Ababa (EBC, 21 January 2022).

Exposed to an onslaught from TPLF forces advancing south and east, panicking authorities in the Amhara region rapidly mobilized regional militias and encouraged local authorities to conduct recruitment drives and direct individuals toward the war front, which they did throughout the fall of 2021 (Ethiopian Insider, 25 July 2021). Thousands of people were armed and trained by militia leaders in the Amhara region and gained military experience during combat with TPLF forces. Afar authorities worked closely with the national army, which had regrouped in Semera to protect the Mille corridor.

All resources in the Amhara region went toward the war effort from early July to 28 December 2021 (the day when Amhara government services resumed as normal) and the size of forces loyal to the regional government swelled (Ethiopian Insider, 28 December 2021). Although initially unorganized, the militias managed to put up stiff resistance to advancing TPLF forces by November 2021. With the help of recently purchased drones from Turkey, the United Arab Emirates (UAE), and China, and a revitalized national army led by Abiy himself, militias from the Amhara region beat back TPLF forces and forced them to abandon their southern advances.

The halt of TPLF forces in areas just north of Debre Sina in the North Shewa zone of the Amhara region demonstrated the strength of these hastily raised Amhara forces and gave the Ethiopian army time to fix logistical issues and modernize its air force (EBC, 21 January 2022). This, however, came with a political price. These strengthened irregular and regular Amhara militias are loyal to the Amhara regional government and seek to further the interests of ethnic Amhara throughout the country, a dynamic that worries the central government (Le Monde, 27 January 2022).

The destruction caused by TPLF forces in the Amhara region has devastated local infrastructure and disrupted the lives of thousands of people (France24, 20 January 2022). People are angry that the government failed to protect them from the TPLF, feel that they were misled about the federal army’s capacity, and are upset by reports of violence committed against Amhara civilians by invading TPLF forces (National Movement of the Amhara, 17 October 2021). The result of conflict throughout 2021 has been a heavily armed and highly militarized Amhara region with a distinct distrust of the Abiy-led Prosperity Party (see EPO Monthly: April 2021).

Tensions between the Amhara and Oromo regional governments have also manifested throughout the past year in a series of violent communal clashes over contested territory and governance rights. Communities of ethnic Amhara farmers who settled (or were settled in government relocation programs throughout the 1980s) in fertile areas of Oromia have recently come under intense pressure due to demands for greater protection and representation in governance. Accused of land grabbing or illegal settlement, Amhara civilians in these communities have been targeted in communal clashes at an increasing rate over the past two years, resulting in hundreds of fatalities and thousands of displacements (DW Amharic, 12 January 2022). Individuals with strong ties to kin in the Amhara region have taken advantage of the increased militarization of the region and sought training and arms.

Amhara militias trained and armed in the Amhara region in 2021 as part of the war against the TPLF have already been accused of participating in violent contests in other areas of Oromia (OBN, 13 January 2022; Addis Standard, 26 August 2021). This dynamic exists in other parts of Ethiopia as well, where Amhara claim land not under the administration of the Amhara regional government. Amhara militias are also active in the Western and Southern zones of Tigray, the Metekel zone of the Benshangul/Gumz region, and the Sudanese border (Al Fashaga).

The advance and retreat of the TPLF has also exposed cracks in alliances led by the TPLF. As TPLF forces consolidated control over Dessie and Kombolcha towns in the Amhara region and moved southward into Oromia special zone, there were some limited clashes in the first weeks of November 2021 between TPLF forces and OLF-Shane, a group officially allied with the TPLF since August 2021 (Al Jazeera, 11 August 2021; ESAT, 15 December 2021).

Some anti-government parties also distanced themselves from the TPLF upon its rapid advance toward Addis Ababa. The Oromo Liberation Front (OLF) issued a statement calling for “an end to the TPLF’s advance toward the Oromia region” (DW Amharic, 6 November 2021). This placed the OLF in direct contestation with its former armed wing, the Oromo Liberation Army (OLA), an official ally of the TPLF (see EPO Monthly: November 2021). While the two groups had officially split in April 2019, they have remained aligned in their political goals. This statement was one of the first to officially highlight the controversial decision of the OLA to align with the TPLF.

The federal government is proceeding as if the conflict is over. It is looking to move forward with addressing the future of the country through a national dialogue with different stakeholders (DW, 30 December 2021). The hope of the national dialogue is to “pave the way to a lasting solution to Ethiopia’s problems in a non-violent and peaceful way” (Africanews, 11 January 2022).

The federal government hopes to enter the national dialogue riding a wave of boosted popularity following the withdrawal of TPLF forces from the Amhara and Afar regions. Abiy himself made a point of leading the troops in the recapture of territory and has enjoyed renewed enthusiasm from his support base in Addis Ababa (AA, 8 December 2021). This enthusiasm is not mirrored throughout the country, though, and many question the genuineness of the government’s approach to the dialogue process.

At its conception, several representatives from the Amhara region, who insisted that “terrorist organizations” not be included (a reference to the TPLF and the OLF-Shane), called the urgent preparation for the dialogue “suspicious” (Ethiopian Insider, 29 December 2021). They advocated for a continued focus on the war. Opposition parties like the Ogaden National Liberation Front (ONLF) expressed doubts but indicated that they would participate as long as the dialogue meets standards of “inclusiveness and genuine representativeness” (ONLF, 22 January 2022).

All current plans for a dialogue committee indicate that the TPLF will not be included in these talks, and government forces are gearing up for potential clashes (EBC, 20 January 2022). As clashes against the TPLF have slowed, government forces have scaled up operations in the Oromia region against OLF-Shane (EBC, 12 January 2022). International critics of the plan suggest that little could hope to be accomplished should the national dialogue not include all parties, especially if it is held amid active conflict in both Oromia and Tigray (Al Jazeera, 9 January 2022)-

Ethiopia’s relationship with the US and the EU

Ethiopia’s international relationships with the United States (US), the European Union (EU), and the United Nations (UN) have been critically changed throughout the course of the war. On 2 January 2022, the United States removed Ethiopia from the African Growth and Opportunity Act (AGOA) over “gross violations of internationally recognized human rights being perpetrated by the government of Ethiopia and other parties amid the widening conflict in northern Ethiopia” (France 24, 2 January 2022). The US earlier expressed concern over Ethiopia’s recent purchases of Turkish drones (Reuters, 22 December 2021).

A special session of the UN Human Rights Council convened at the request of the EU was held on 17 December 2021, during which delegates were told that “nine in 10 people in the [Tigray] region now require humanitarian assistance” (UN News, 17 December 2021). The Ethiopian Ministry of Foreign Affairs denounced the special session, noting that the Human Rights Council has been used “by some to advance their politically motivated agenda” (Ethiopian Ministry of Foreign Affairs, 17 December 2021).

Ethiopia’s distancing from the US and the EU has opened up new opportunities for Turkey, Russia, China, and the  United Arab Emirates (UAE), all of whom have backed the government (Asia Times, 6 December 2021).

Amid worsening relationships both domestically within the ruling party and between former international partners, the government has hedged its bet that national dialogue will pull the country out of its current political crisis. Whether or not the dialogue is able to overcome Ethiopia’s many conflicts remains to be seen.