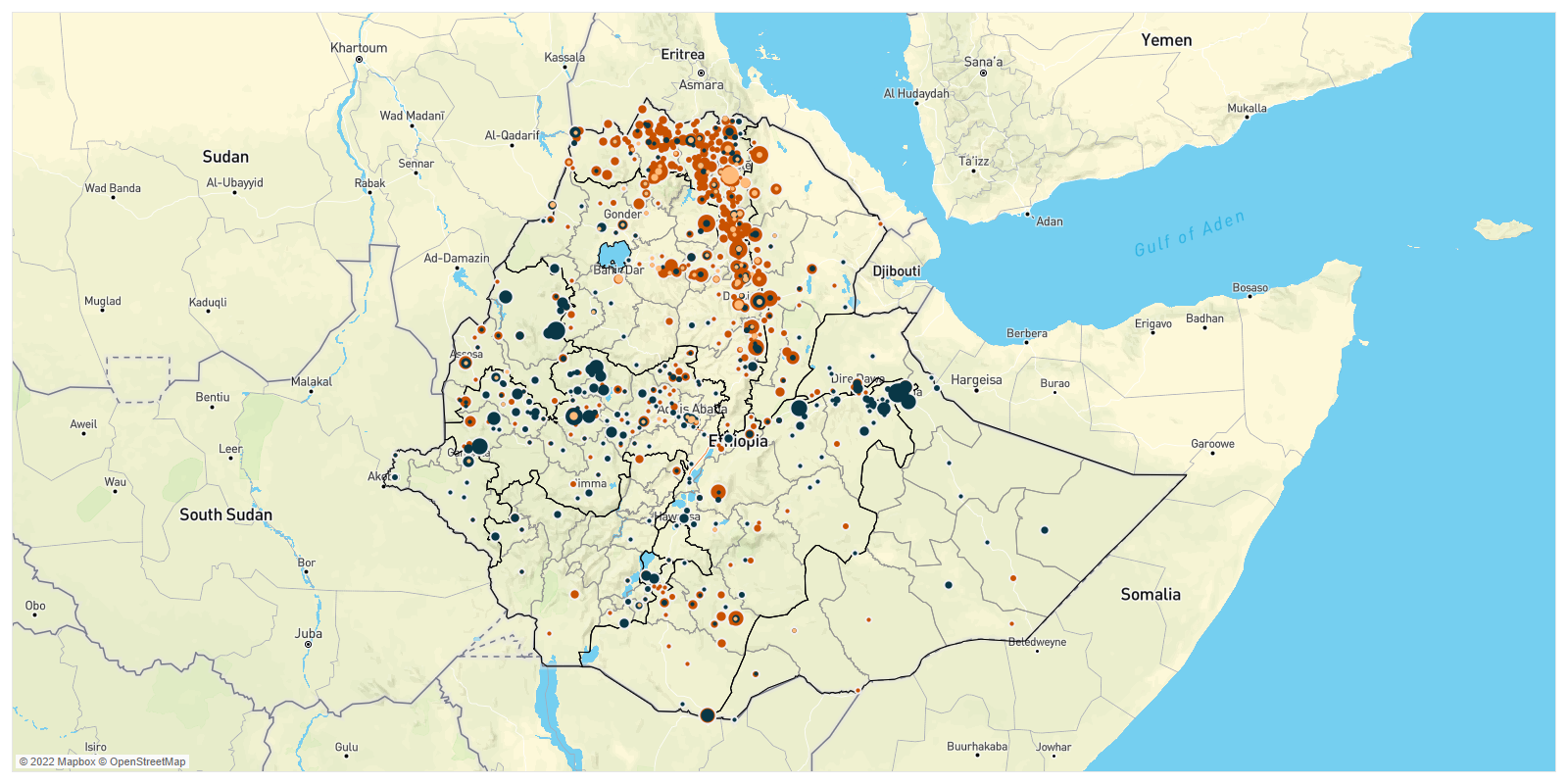 By the Numbers: Ethiopia, 12-18 February 2022 2Some events from this coverage period might be included in the data in subsequent weeks due to reporting delays. 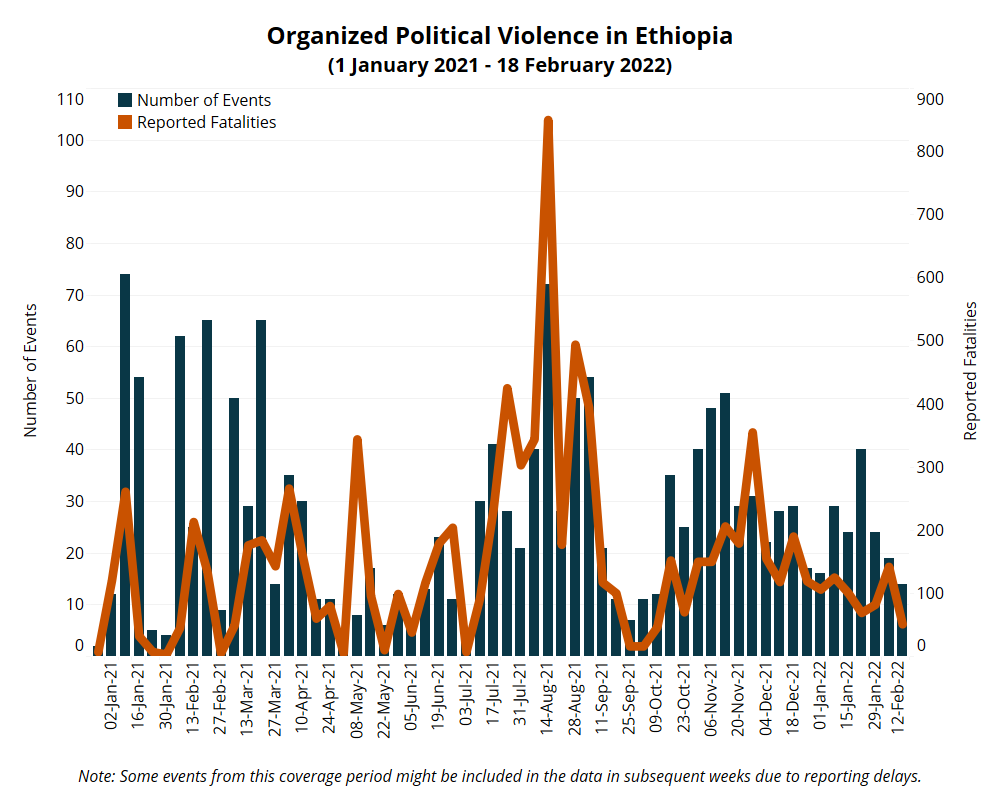 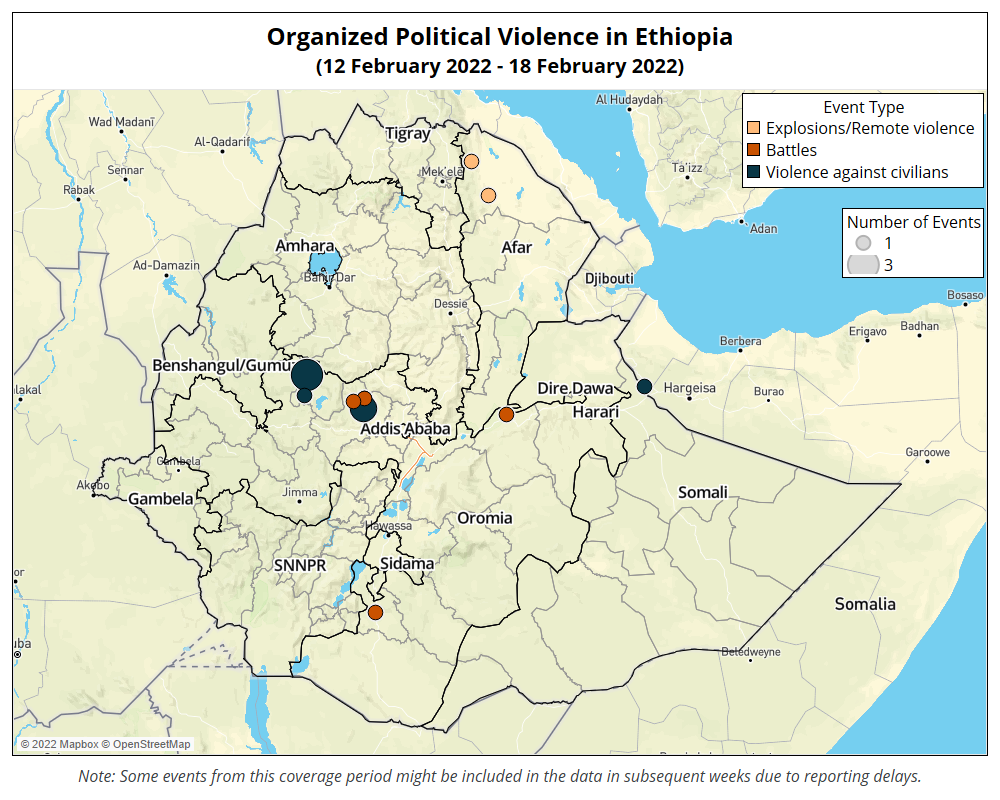 Armed clashes between the government forces and members of OLF-Shane also continued in the Oromia region. Last week, the two groups clashed in Abuna Gindeberet woreda in the West Shewa zone, Bule Hora in the West Guji zone, and Bereda in Mieso in the West Hararge zone. In the meantime, the extrajudicial execution of people who are accused of having links with OLF-Shane continued by members of the government forces in the Oromia region. On 12 February, Oromia regional special forces shot and killed a prisoner in Awara in Abuna Gindeberet woreda. The victim was one of the 20 youths who had been arrested a day earlier after being accused of supporting OLF-Shane. On the same day, Oromia regional special forces, federal police, and Ethiopian National Defense Force (ENDF) fired live bullets at civilians in Shikute town in Jeldu woreda in the West Shewa zone after accusing local residents of feeding members of OLF-Shane. Two children were killed and a civilian was injured due to this attack. Two days later, members of ENDF shot and killed a high school student in the same town. The reason for the killing, however, is unknown.

Moreover, two protests against OLF-Shane were held in the Oromia region last week. On 16 February, a protest against the recent abduction and killing of farmers in Shenkora Shesheng kebele in Wara Jarso woreda was held in front of the Goha Tsion police station. The protestors blocked the Abay Berha main road which connects Goha Tsion with Bahir Dar city for several hours. A week earlier, on 9 February, members of OLF-Shane abducted at least 18 farmers and killed seven who could not pay the ransom money. The second protest was held on Friday 18 February when Abuna Gindeberet residents demonstrated against OLF Shane rebels in Awara and asked the group to stop killing civilians and property destruction in the name of the “struggle for Oromo people” (Oromia Communication Bureau, 18 February 2022).

Last week in the Afar region, ACLED data recorded two incidents of shelling in Berahle and Erebti in Kilbati Rasu-Zone 2. On 16 February, the Tigray People’s Liberation Front (TPLF) shelled Afar regional special forces and allied militias in Erebti. On the same day, 10 members of one Afar family were killed while 13 others were injured by a shelling fired by an unidentified armed group around Ala River near Ada town which is located 15km from Berhale town. Civilians continue to be displaced due to the continued armed clashes in Kilbati Rasu-Zone 2 in the Afar region (DW Amharic, 17 February 2022).

In the Somali region, on 15 February, Somali regional special forces opened fire on a passenger vehicle in Aw Bare in the Fafan zone after the vehicle failed to stop at a checkpoint. Two students were killed. Following the incident, demonstrators blocked roads with burning tires to demand justice for the victims.

Last week, on 15 February, the Federal Democratic Republic of Ethiopia (FDRE) House of Representatives (HoR) lifted the state of emergency which was implemented on 2 November 2021. After submission by the Council of Ministers, the HoR approved the Council’s decision to end the state of emergency by a majority vote. Sixty-three members voted against and 21 abstained from voting (House of Peoples Representatives of FDRE, 15 February 2022). Following the vote, the House gave orders to security forces to finalize any unfinished activities connected with the state of emergency – e.g. releasing or processing the arrested people through the formal judicial process – within one month. HoR members who opposed the decision to end the mandate insisted that serious security threats still existed, pointing out the ongoing violence involving TPLF in Afar and Amhara regions, and OLF-Shane in the Oromia region (Fana Television, 15 February 2022).

Representatives who voted against the lifting of the state of emergency represent an important section of Ethiopia’s government that will resist efforts by the prime minister to push a negotiated peace with the TPLF or OLF-Shane. National Movement of Amhara (NaMA) officials and Prosperity Party representatives who opposed the end of the mandate have also expressed opposition to engaging in talks with the TPLF and dropping the “terrorist” designation of TPLF or OLF-Shane. NaMA official, Desalegn Chanie, accused the government of prematurely lifting the state of emergency “in order to please the diplomatic community without ensuring the safety of fellow citizens” (Reuters, 15 February 2022). Prime Minister Abiy responded to the accusations that the government had not been engaged in talks with the TPLF during an emergency session with the HoR stating that “there has been no negotiation until this moment [i.e. until 22 February 2022]. But this does not rule out the possibility of discussions with TPLF” (Fana Television, 22 February 2022).

The Ethiopian Human Rights Commission (EHRC), US Department of State, and UN welcomed the HoR’s decision and called for the release of the remaining prisoners arrested under the state of emergency (US Department of State, 15 February 2022; EHRC, 15 February 2022). The UN stated that out of its 16 employees, who were arrested in November 2021 under the suspicion of having links with the TPLF, the last three were released last week (Ethiopian Insider, 19 February 2022). The others were released during the past few months. The head of the press office at the Ministry of Justice stated that the cases of those arrested due to the state of emergency will now be expedited through the “normal” legal procedures (VOA Amharic, 18 February 2022).

The state of emergency gave power to the government and security forces to search and arrest individuals without a warrant. Additionally, it allowed the closing of streets and the partial or full suspension of the administrative governance structure or replacement of administrators if there were a security threat, among other things (FDRE Ministry of Justice, 3 November 2021). As a result, from November 2021 to February 2022, thousands of people, mostly Tigrayans, were arrested under suspicion of having links with either TPLF or OLF-Shane (see EPO Weekly: 6-12 November 2021). Furthermore, during the first week of November, the authorities from the Oromia region blocked roads to stop internally displaced persons (IDPs) from Wello zones to travel to the capital city, Addis Ababa, citing security reasons (BBC Amharic, 5 November 2021).

Despite the state of emergency having been officially lifted, illegal detentions by authorities have continued. On 17 February 2022, the EHRC issued a statement expressing concern about “unlawful detentions after the lifting of the State of Emergency and the unfair use of remand procedure for an extended detention” (EHRC, 17 February 2022). It is still unclear if the government will manage to bring the remaining prisoners to court within the stipulated time frame by the HoR.