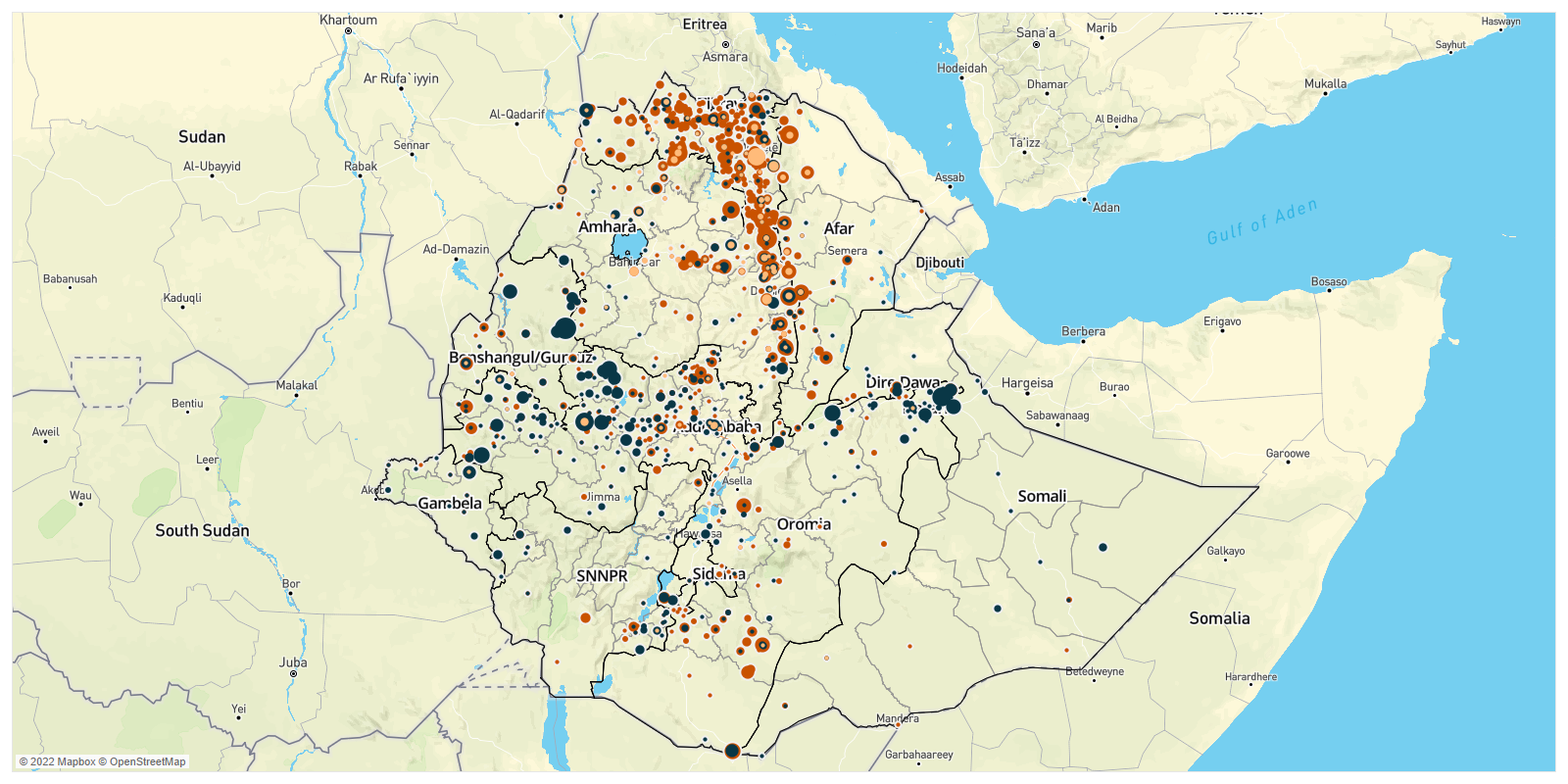 By the Numbers: Ethiopia, 2-8 July 20222Some events from this coverage period might be included in the data in subsequent weeks due to reporting delays. 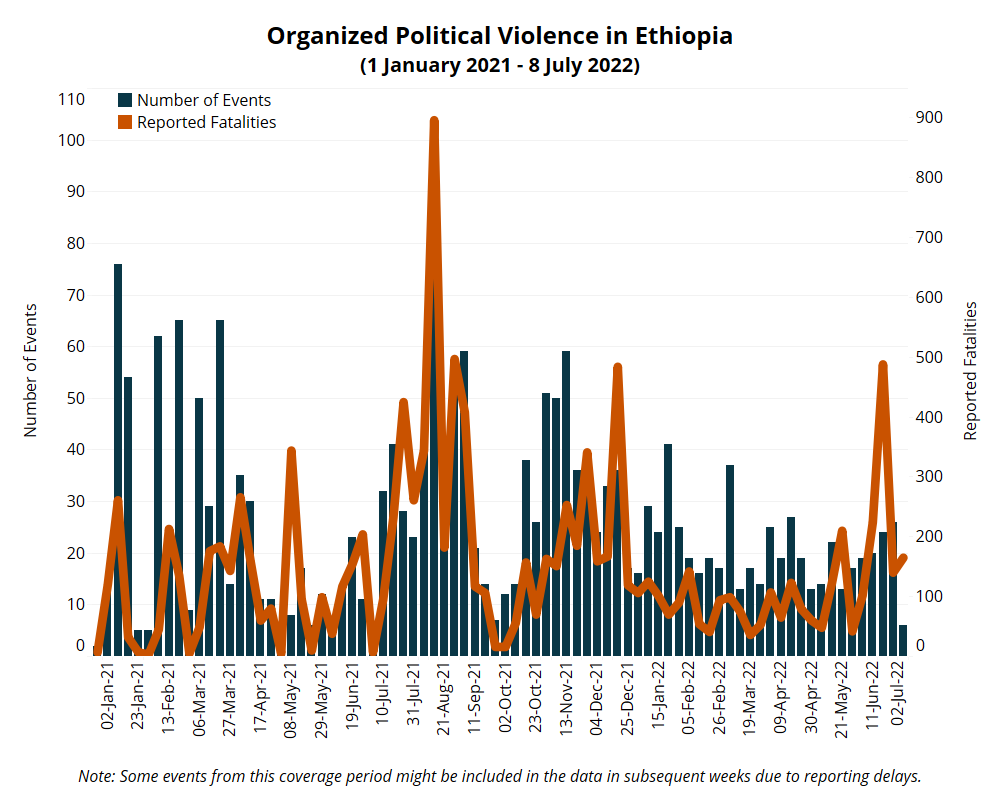 Last week, violence against civilians continued in Oromia region. However, no armed clashes were reported in the region. On 4 July, the Oromo Liberation Front (OLF-Shane) attacked civilians and reportedly killed at least 150 people, mostly ethnic Amhara civilians, and injured over 45 others in Mender 20 in Lemlem kebele in Hawa Galan woreda in Kellem Wollega zone (see map below). The group also abducted an unidentified number of people and looted and damaged the residents’ properties. The rebel group denied responsibility and accused local government militias of perpetrating the attack (DW Amharic, 5 July 2022). The next day, OLF-Shane militants allegedly killed three and wounded two farmers in Dano Tulto kebele in Amaro special woreda in Southern Nations, Nationalities and Peoples region (SNNPR). The armed group also looted an unspecified number of cattle. The rebel group denied the allegation that it was behind the attack (VOA Amharic, 6 July 2022). 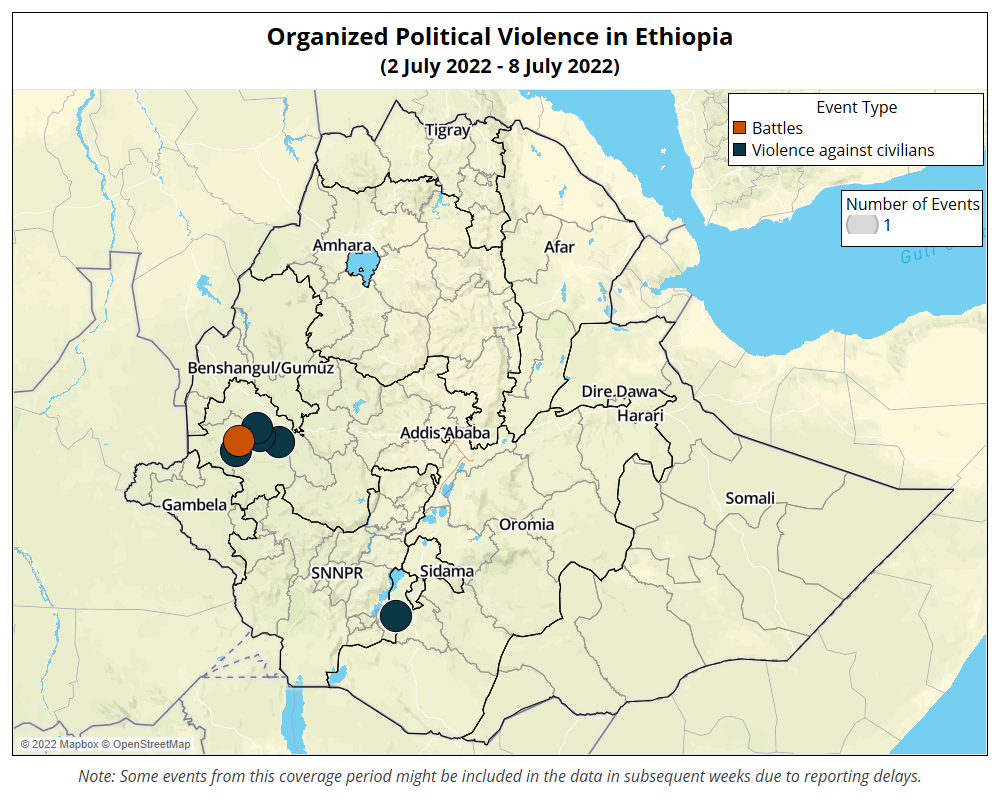 In response to a second high-fatality event involving the targeting of ethnic Amhara civilians in Oromia region in the span of just three weeks, members of the House of People’s Representatives (HoPR) reportedly convened a rare closed-door meeting on 6 July (Ethiopia Insider, 6 July 2022). Citing rumors that local government officials were complicit in the attack, representatives from the National Movement of the Amhara (NaMA) demanded the same day that western Oromia be placed under the administration of the federal government (BBC Amharic, 6 July 2022). The attack last week in Lemlem kebele in Kellem Wollega zone that left over 150 people, mostly ethnic Amhara civilians, dead came after another similar attack in Tole kebele in West Wollega zone on 18 June resulting in the killings of at least 338 people, mainly Amhara civilians. Both attacks have been blamed on the OLF-Shane; an accusation that the group denies.

In the special session, the HoPR passed a six-point resolution authorizing one minute of silence “for unjustly massacred citizens” rather than the widely demanded one-day national mourning by lowering the flag to half-mast. The rest of the points, among other things, provided for the establishment of a special committee tasked with investigating the incidents and providing information to parliament (House of Peoples Representatives of FDRE, 6 July 2022).

In contrast to demonstrations that erupted in Amhara region in response to the killings in Tole in Gimbi woreda in West Wollega zone, there were no demonstrations reported last week. Security forces repressed demonstrations in the wake of the Tole massacre, triggering clashes in some areas. In Shewa Robit in North Shewa zone, six people were killed during a clash between security forces and some residents of the town who were demanding the release of people arrested for organizing a demonstration against the Tole massacre in the town. A violent dispersal of protesters was also reported in Addis Ababa following a protest by Addis Ababa University students on 25 June (Borkena, 26 June 2022).

The Ethiopian Human Rights Commission director released a statement on 4 July in response to the massacre in Kellem Wollega, stating that: “The continued insecurity in the area and what appears to be the ethnically targeted killing of residents must be put to a stop immediately” (EHRC, 4 July 2022).

In a speech to parliament, Prime Minister Abiy Ahmed vowed to defeat the OLF-Shane, which according to the government is responsible for both massacres targeting civilians in Oromia over the past three weeks (VOA, 7 July 2022). Abiy’s speech brought anger to some people who accused him of insensitivity given the current situation and of inappropriately comparing “terrorism” and gun violence in the United States with Ethiopia’s political woes (Borkena, 7 July 2022). In his speech, the prime minister had called the attacks by OLF-Shane as “terrorism” and raised the issues of gun violence in the United States, Al Shabaab in Somalia, Boko Haram in Nigeria, and Houthi rebels in Yemen to show the challenges of controlling and countering “terrorism” across the world (EBC, 7 July 2022).

One of the most critical public voices that has emerged in the public eye recently is that of the Amhara Association of America (AAA), which called for the resignation of Prime Minister Abiy Ahmed Ali and Oromia Regional President Shimelis Abdisa after the Tole massacre (AAA, 20 June 2022). The organization was one of the first entities to provide details on the event in Kellem Wollega zone, and has been active in criticizing the government in news outlets and social media alike (AAA, 10 July 2022).

Continued violence targeting civilians in Oromia region has put pressure on the ruling Prosperity Party, and in particular, Prime Minister Abiy Ahmed. While the government has subdued protest movements for now, the chance of renewed protest and riot activity is high, especially if civilian targeting in Oromia region continues.