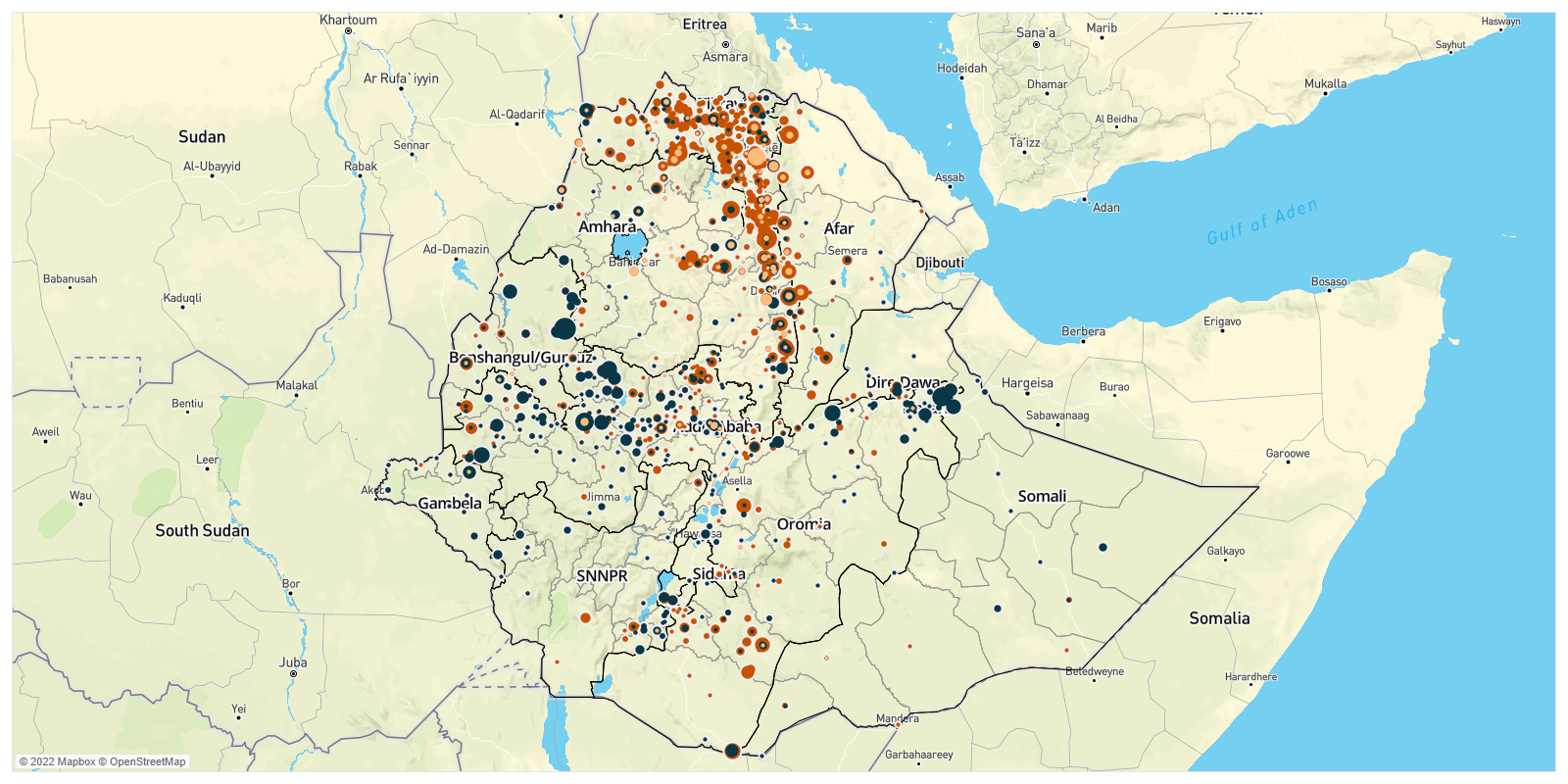 By the Numbers: Ethiopia, 9-15 July 20222Some events from this coverage period might be included in the data in subsequent weeks due to reporting delays. 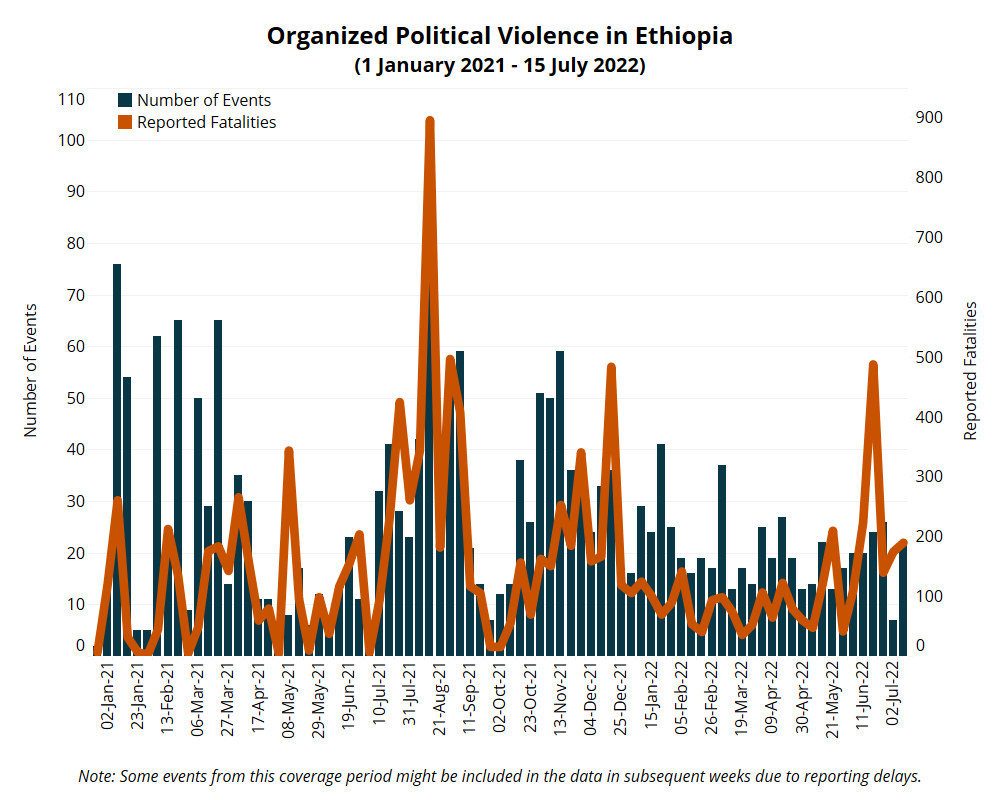 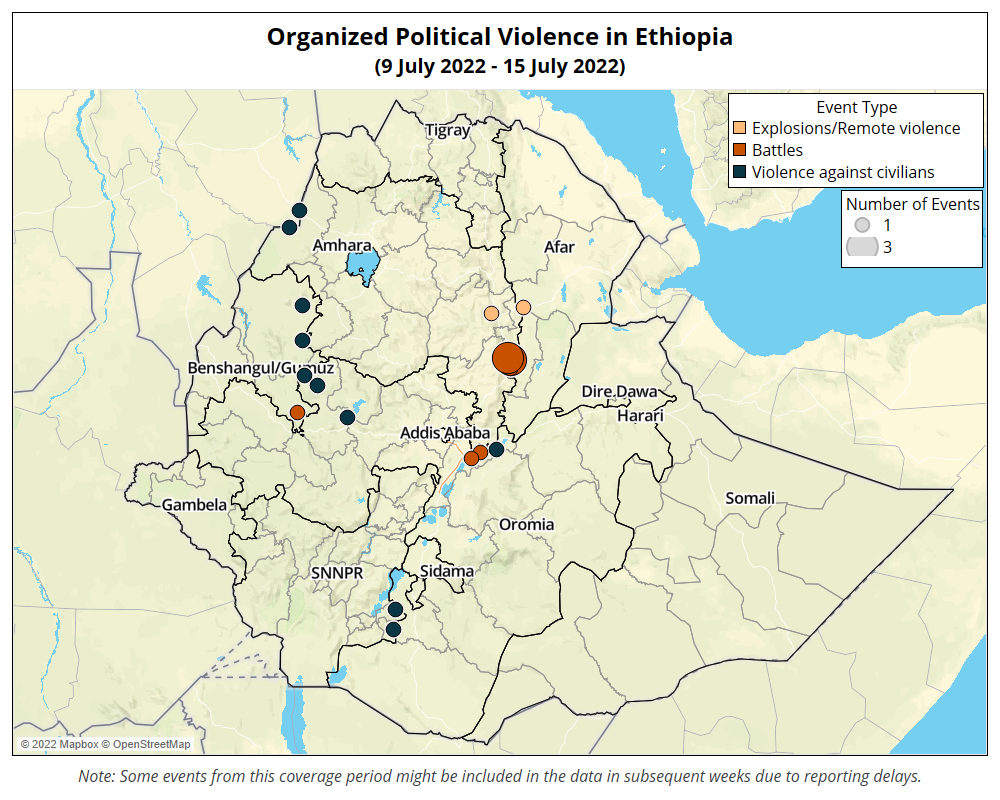 The OLF-Shane was also involved in other incidents in Southern Nations, Nationalities and Peoples region (SNNPR). On 13 July, members of the OLF-Shane allegedly killed four and wounded five farmers in Waleme kebele in Burji special woreda. The armed group also reportedly looted around 50 cattle. However, the rebel group denied the allegation. The same day, members of the OLF-Shane allegedly killed a farmer in an unknown rural area in Amaro special woreda. The rebel group denied involvement in this attack as well (VOA Amharic, 15 July 2022).

In Amhara region, government forces fought against suspected OLF-Shane militants in North Shewa and Oromia special zones last week. These events are discussed in detail in the Weekly Focus section. Further, Qemant ethnic militiamen and an unidentified armed group reportedly entered Shumet Mendoka (Borni) village in Metema woreda in West Gondar on 9 July at midnight and opened gunfire on civilians, killing six people and wounding four others. The militants also looted over 1,500 cattle and destroyed civilian properties. On 12 July, an explosive device left behind by an unidentified group and collected by recyclers detonated in an open market and injured 11 civilians in Dessie town in South Wello zone.

In Benshangul/Gumuz region, on 10 July, Fano militiamen allegedly shot and killed two members of Agaw ethnic group in Birtukan and Sisay villages in Dangura woreda, Metekel zone. Additionally, ENDF, regional special forces, and state police clashed with members of the Gumuz People’s Democratic Movement (GPDM) in Dedesa kebele in Mizyiga woreda in Kamashi zone, taking control of the kebele shortly after. The GPDM took control of this kebele and five other kebeles in Mizyiga woreda in May 2021. Around 13 July, government forces, presumably the ENDF, shot and killed a member of the GPDM in Debati woreda in Metekel zone. He had entered the town following the calls to negotiate with the government. Last week, the Benshangul/Gumuz regional police announced that 30 to 40 people accused of breaching the curfew had been arrested in Asosa town. The regional government had declared a night curfew in the town on 8 July. The previous day, in his latest speech to the House of Representatives, Prime Minister Abiy Ahmed had indicated that an unidentified group was plotting to conduct attacks in Asosa (EBC, 7 July 2022).

Lastly, On 9 July, a landmine planted by an unidentified armed group exploded near Kasa Gita in Adar woreda in Awsi-Zone 1 in Afar region, killing four teenagers. Last month, a child was killed and another injured due to the explosion of a mine near Chifra in Awsi-Zone 1. These are likely explosive remnants of the conflict between government and Tigray People’s Liberation Front (TPLF) forces in 2021.

The cause of the renewed fighting is disputed among residents of the area. Residents in North Shewa zone accuse OLF-Shane gunmen of being involved, and of initiating the clashes. In contrast, residents of Oromia special zone blame government forces who allegedly attempted to take farmers’ cattle using force (VOA Amharic, 13 July 2022). Other reports indicate that the fighting erupted after cattle were released into farmlands. One report stated that the armed clashes were initiated after six armed people wearing government security forces’ uniforms shot and killed a farmer working in the field (Ethiopian Reporter, 13 July 2022).

Clashes in this area are frequent due to territorial and administrative disputes. Due to its status as a special zone, political leaders in Oromia special zone of Amhara region have exercised a great deal of autonomy since its creation in 1995. Under Ethiopian law, despite falling under Amhara region’s boundaries, the zone is administered with special provisions for its ethnic Oromo inhabitants, which often place them in direct contestation with Amhara regional authorities. Ethnic Oromos, many of whom are pastoralists, often come into conflict over water and pasture resources with ethnic Amhara and Afar residents in the area. The alleged involvement of the OLF-Shane also complicates the matter. Previous accusations that the group was operating in the area were denied by both the Oromia regional government and the group’s spokesperson (BBC Amharic, 24 March 2021). This claim was later reversed as TPLF forces advanced southward into Oromia special zone, when a sudden and short-lived “joint operation” was declared (Reuters, 1 November 2021). A substantial link between the Oromo armed groups operating in this area and the commanders of the OLF-Shane are doubtful given previous denials and geographic restrictions of movement. While some militant links could exist, it is more likely that these Oromo groups self-identify with the OLF-Shane and its political goals of Oromo autonomy and control of historic land (see the EPO’s Kemise Conflict page for more information on clashes in this area).