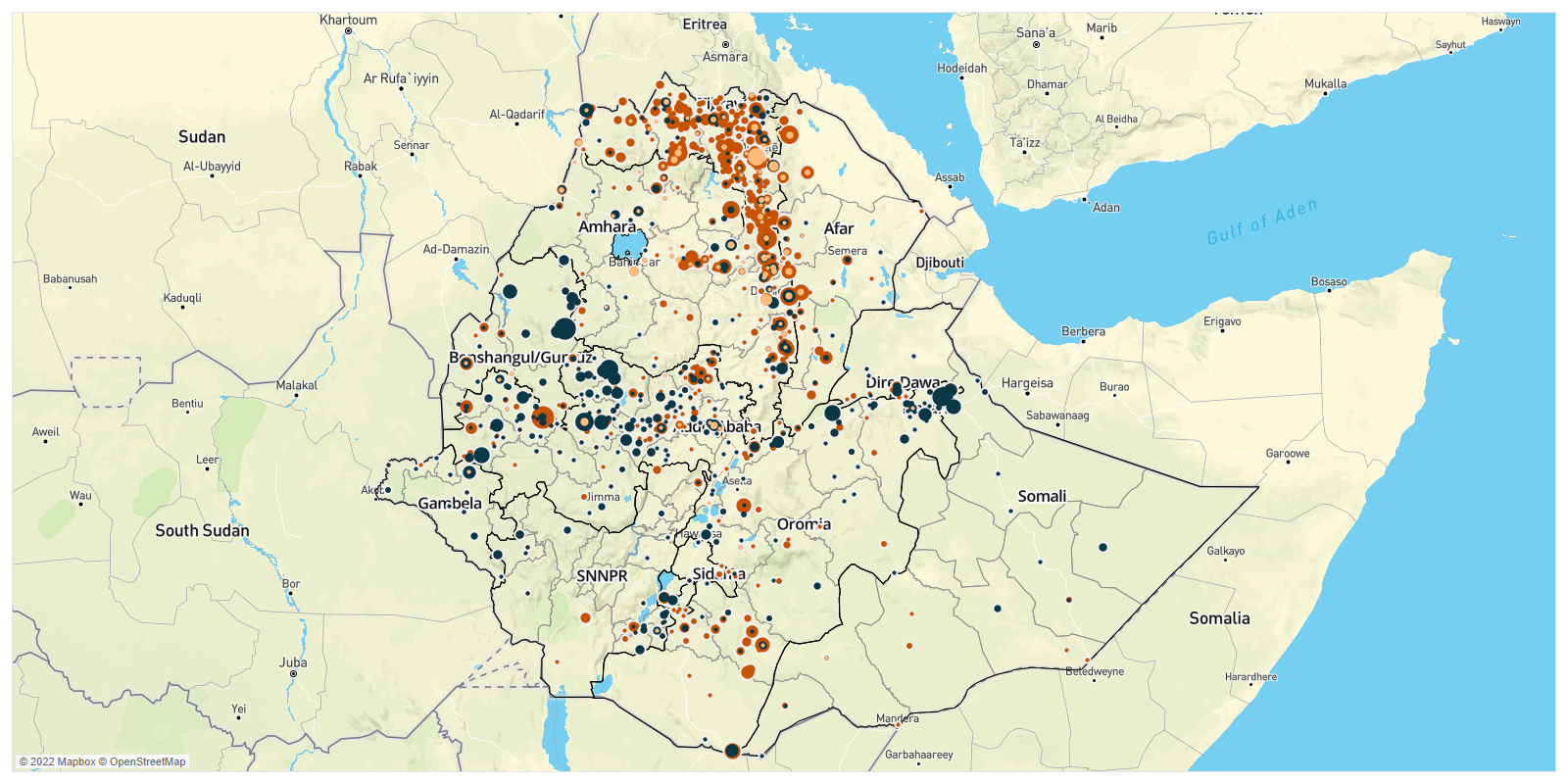 By the Numbers: Ethiopia, 23-29 July 20222Some events from this coverage period might be included in the data in subsequent weeks due to reporting delays. 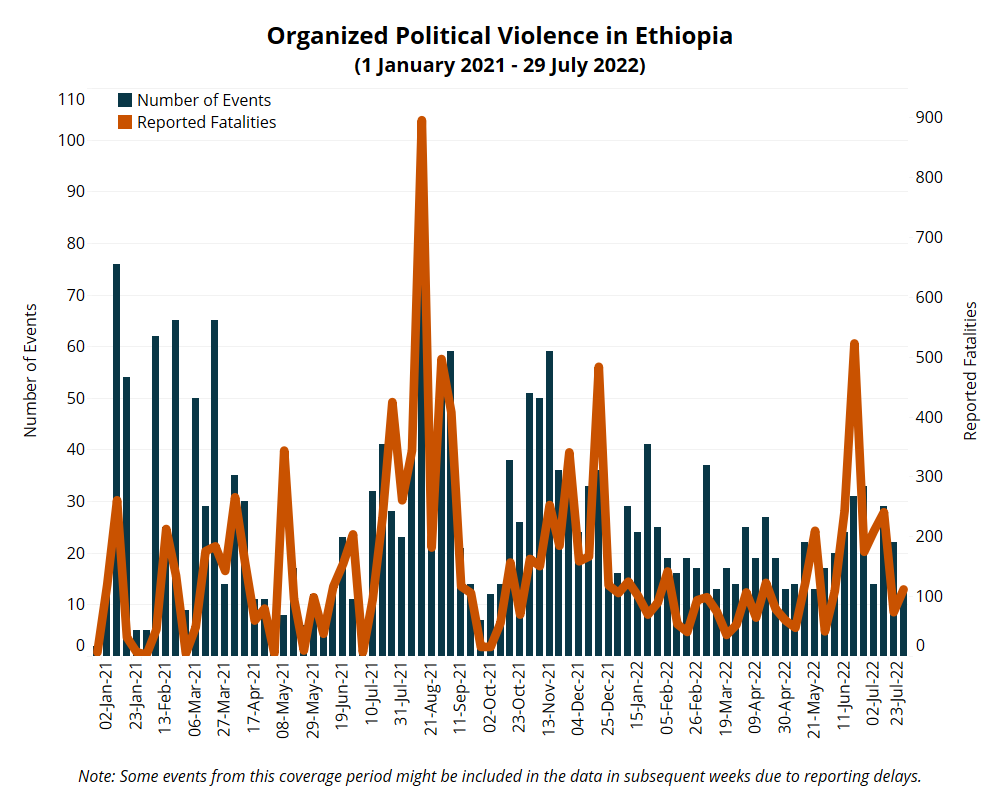 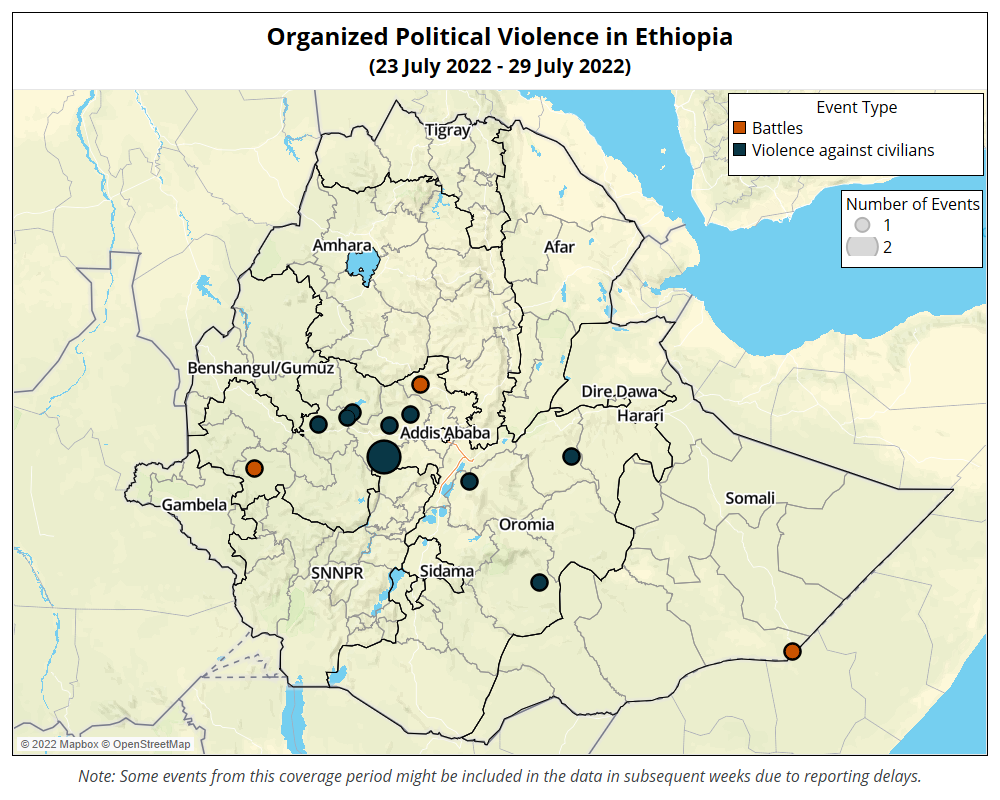 Since the reformation of Somali regional special forces in 2018, their involvement in Oromia region has been rare. On 28 July, they were reported to have opened gunfire on civilians for an unknown reason, killing an unidentified number of people in Habrona kebele in Guradamole woreda in Bale zone and displacing residents from their homes. A week earlier, on 18 July, it was reported that Somali ethnic militiamen from Somali region had attacked Oromo civilians in Guradamole woreda, forcing residents to flee.

Lastly, on 25 July, taxi and heavy truck drivers and their supporters staged a protest in Addis Ababa. Protesters denounced increasing insecurity and the lack of government’s response to tackle insecurity.

Fighting has centered in five main areas, including the border towns of Ato, Yeed, El Barde, Waqasho, and Ferfer (Addis Standard, 26 July 2022). There were also reports stating that members of Al Shabaab had been seen around Kelafo border area in Somali region (EMS, 29 July 2022). So far, it appears that Somali regional special forces have successfully repelled incursion attempts by Al Shabaab militants. It is important to note that the Somali Regional Special Police – often referred to by its Amharic name “Liyu Hayl” — was established as an anti-insurgency force during the conflict with the Ogaden National Liberation Front (ONLF) and its officers are specially trained to deal with these types of military engagements. The ONLF disarmed in 2018 and has since formed a political opposition party. The group issued a statement denouncing the attempted incursion by Al Shabaab via Twitter (ONLF, 21 July 2022).

At least one source quoted US assessments saying that the militant group had penetrated Ethiopia up to 150 kilometers before being stopped. The President of Ethiopia’s Somali region has announced that Ethiopian forces will create a buffer zone inside Somalia to preemptively stop Al Shabaab attacks in Ethiopia. While Somali authorities welcomed the idea, analysts have questioned both the timing and implications for future relations between Ethiopia and Somalia (VOA, 29 July 2022).

Al Shabaab and Islamic State (IS) have shown an increasing interest in Ethiopia over the past few years and have released recruitment videos in both Amharic and Afaan Oromo languages (Militant Wire, 30 July 2022). Reports indicate that the group of Al Shabaab militants who launched the recent attacks are known as “Ethiopian Mujahedeen” (VOA Amharic, 26 July 2022). Activity involving IS affiliates is sometimes reported in Bale zone of Oromia region, although it is often a very local phenomenon and the group’s actual connection to IS is unclear. The last political violence activity involving IS affiliates included limited clashes in Bale zone in January 2021 (Xinhua, 25 January 2021).