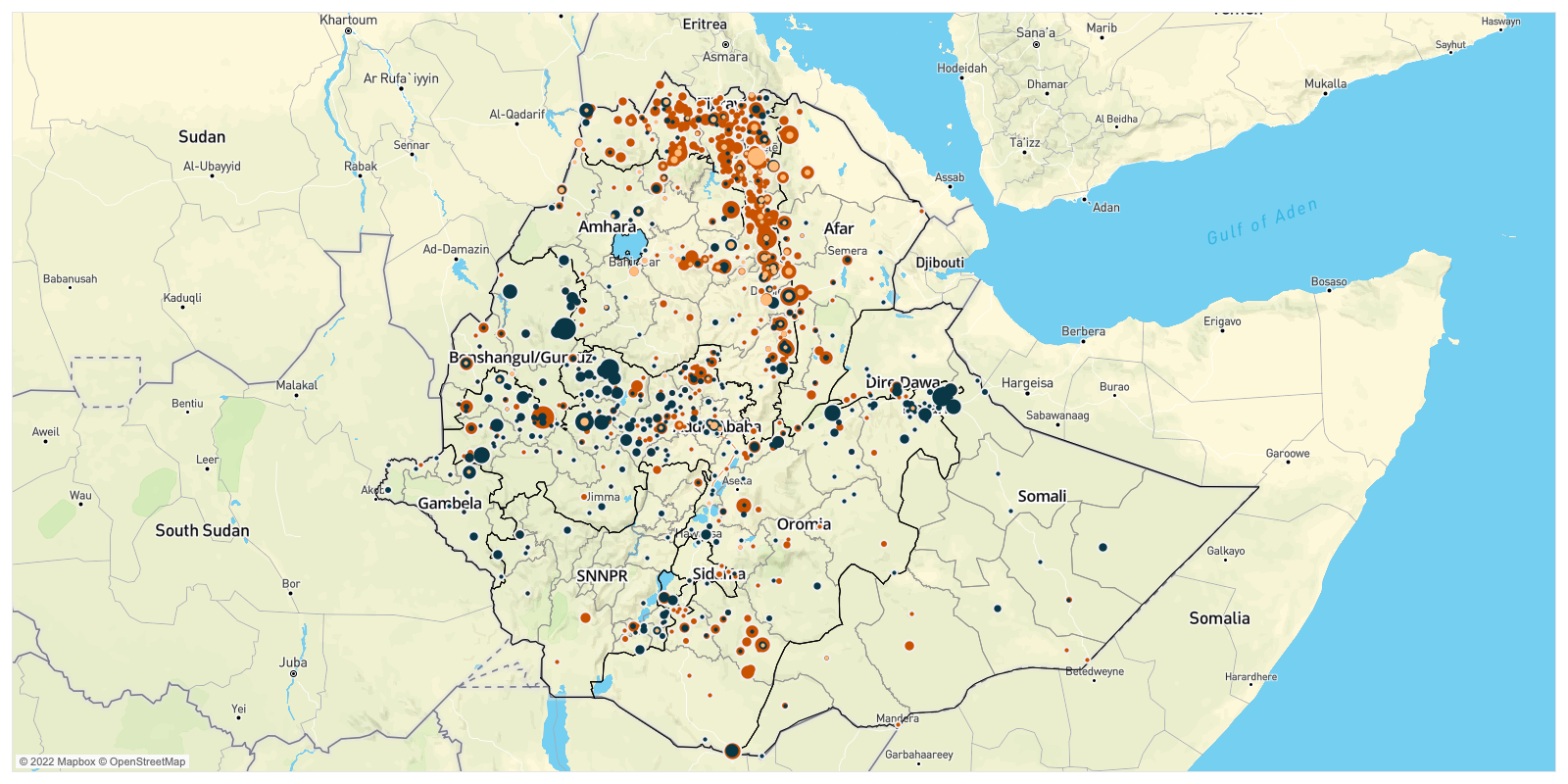 By the Numbers: Ethiopia, 6-12 August 20222Some events from this coverage period might be included in the data in subsequent weeks due to reporting delays. 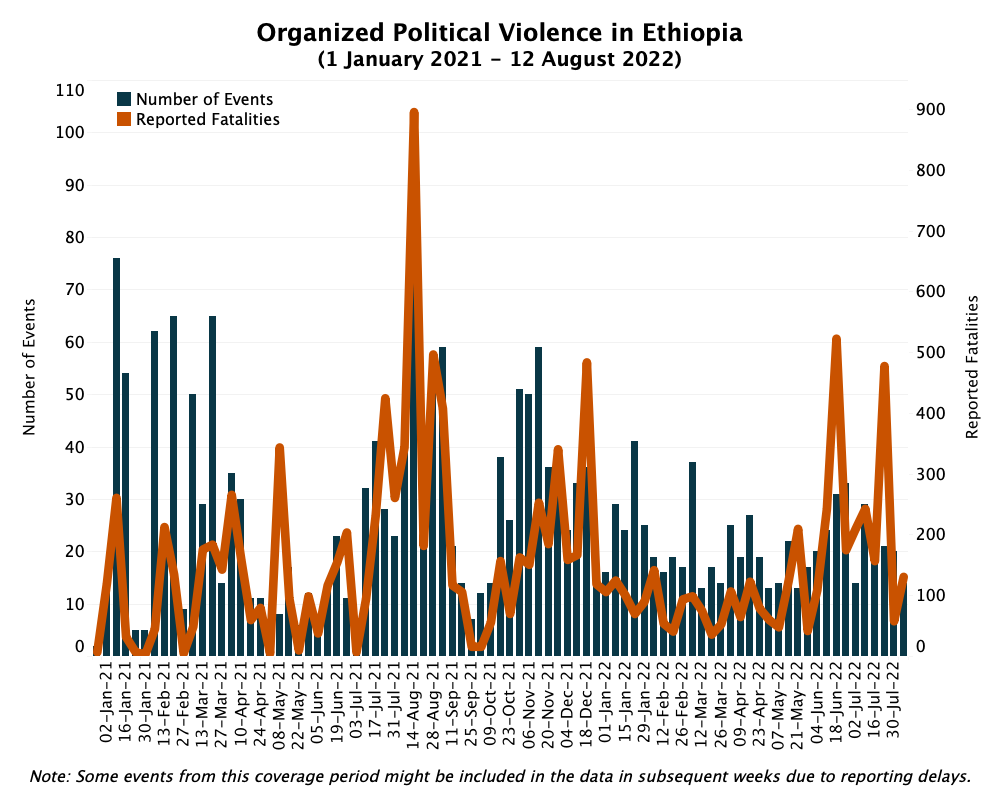 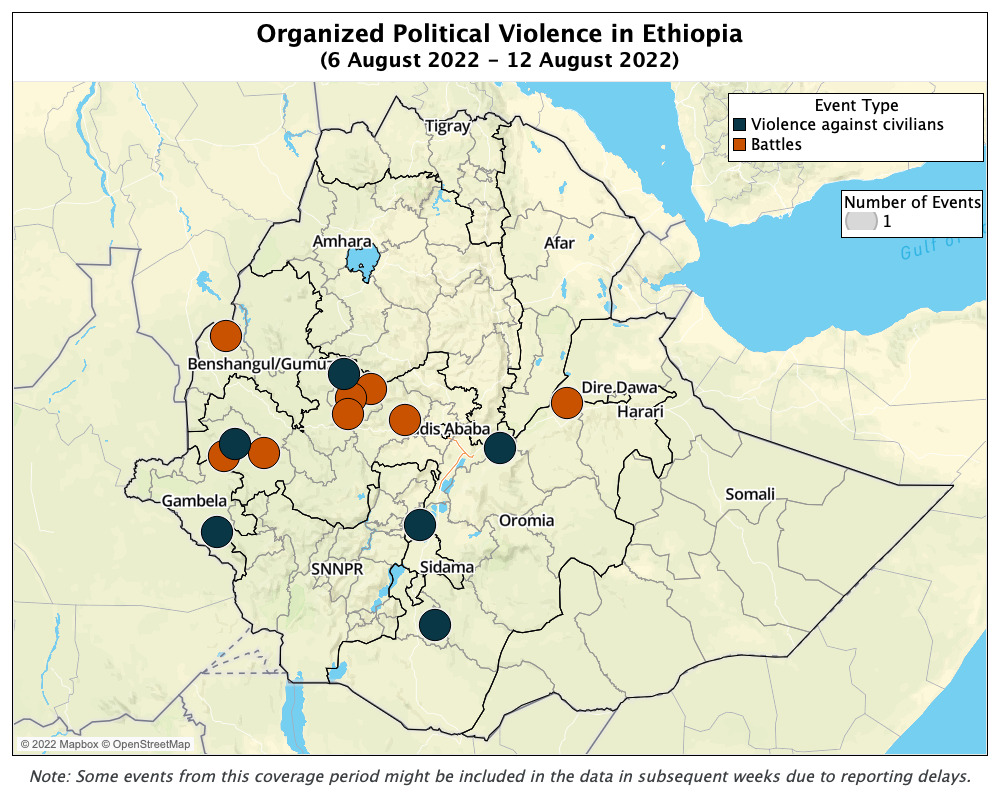 Last week, five attack against civilians events were also recorded in Oromia region. Three of these attacks were conducted by government forces in West Guji, Kellem Wollega, and West Arsi zones. Most victims were either accused of supporting or having links with the OLF-Shane. Additionally, government forces burned over 26 farmers’ houses in Sole Uta and Sole Chafe kebeles in Arsi zone, and over 20 farmers’ houses in Dase Jabo and Abado Jawe kebeles in South West Shewa zone after accusing the farmers of supporting the OLF-Shane.

Further, on 6 August, Fano and Amhara ethnic militias shot at civilians in Agamsa kebele in Amuru woreda in Horo Guduru zone, killing one and injuring an unknown number of others. The same day, the OLF-Shane reportedly killed 20 and injured an unidentified number of Yelayegnawe Agro-Industry (owned by Midroc company) workers in Nura Hera in Boset woreda in East Shewa zone. On 12 August, residents of Dano woreda gathered in Seyo town in West Shewa zone and protested against the OLF-Shane.

The Gambela regional government stated that on 8 August, Murle ethnic militiamen from South Sudan crossed the border and attacked the Ukugu refugee camp near Dimma town in Dimma woreda in Agnewak zone. Two people were reportedly killed while another person was injured due to the attack. The militiamen also abducted two children.

Weekly Focus: Ethiopia Deepens Its Commitment to Somalia with Deployment

Clashes between Al Shabaab and Ethiopian forces on the Ethiopia-Somalia border at the end of July marked a rare occurrence, surprising both the Ethiopian and international communities. Ethiopian forces, led by Somali regional special forces who were later joined by the ENDF, successfully repelled Al Shabaab militants over the course of several days (for more details on these events, see EPO Weekly: 16-22 July 2022). Both the Ethiopian and US governments have reacted to the attacks by stepping up military commitments to Somalia, reversing policies in place over the past few years.

Last week, on 8 August, Somali officials revealed that Ethiopia had deployed thousands of troops into Somalia, establishing bases near the town of Dolow, southwest of where the attacks and clashes occurred the week prior (VOA, 8 August 2022). According to ACLED data, Ethiopian air force jets have conducted at least eight airstrikes against Al Shabaab militants since the end of July.

The US has likewise stepped up its engagement in Somalia, with President Joe Biden approving a plan to re-deploy US troops in the country, reversing a decision by former President Donald Trump who withdrew nearly all 700 ground troops stationed in Somalia (New York Times, 16 May 2022). In fact, the US conducted its most deadly airstrike against the group since March 2022 on 14 August, killing at least 14 Al Shabaab members in Somalia’s central region of Hiran (VOA, 15 August 2022).

These latest deployments and airstrikes mark a reversal of policy for both the Ethiopian and US governments. Ethiopia began withdrawing troops from Somalia at the start of the northern conflict with the Tigray People’s Liberation Front (TPLF) in November 2020 (Bloomberg, 13 November 2020). Al Shabaab has since expanded, taking control of towns once held by Ethiopian troops.

At the heart of Somalia’s instability is a political order riddled with internal divisions and tensions between the central government and federal member states. Al Shabaab’s 15-year-old insurgency continues with no end in sight, and the group has consistently proven resilient to various counterinsurgency campaigns leveled against it (Crisis Group, 21 June 2022). The US and Ethiopia’s renewed engagements are unlikely to change the power that Al Shabaab commands in Somalia, although they may curb its future expansion.

However, the cost, especially to Ethiopia’s federal troops, could be very high. Ethiopian security forces are under huge pressure as conflicts expand throughout the country. Although the northern conflict has calmed in recent months, insurgencies in Oromia and Benshangul/Gumuz regions, and unrest in Southern Nations, Nationalities and Peoples region (SNNPR) threaten to overwhelm security resources currently available.