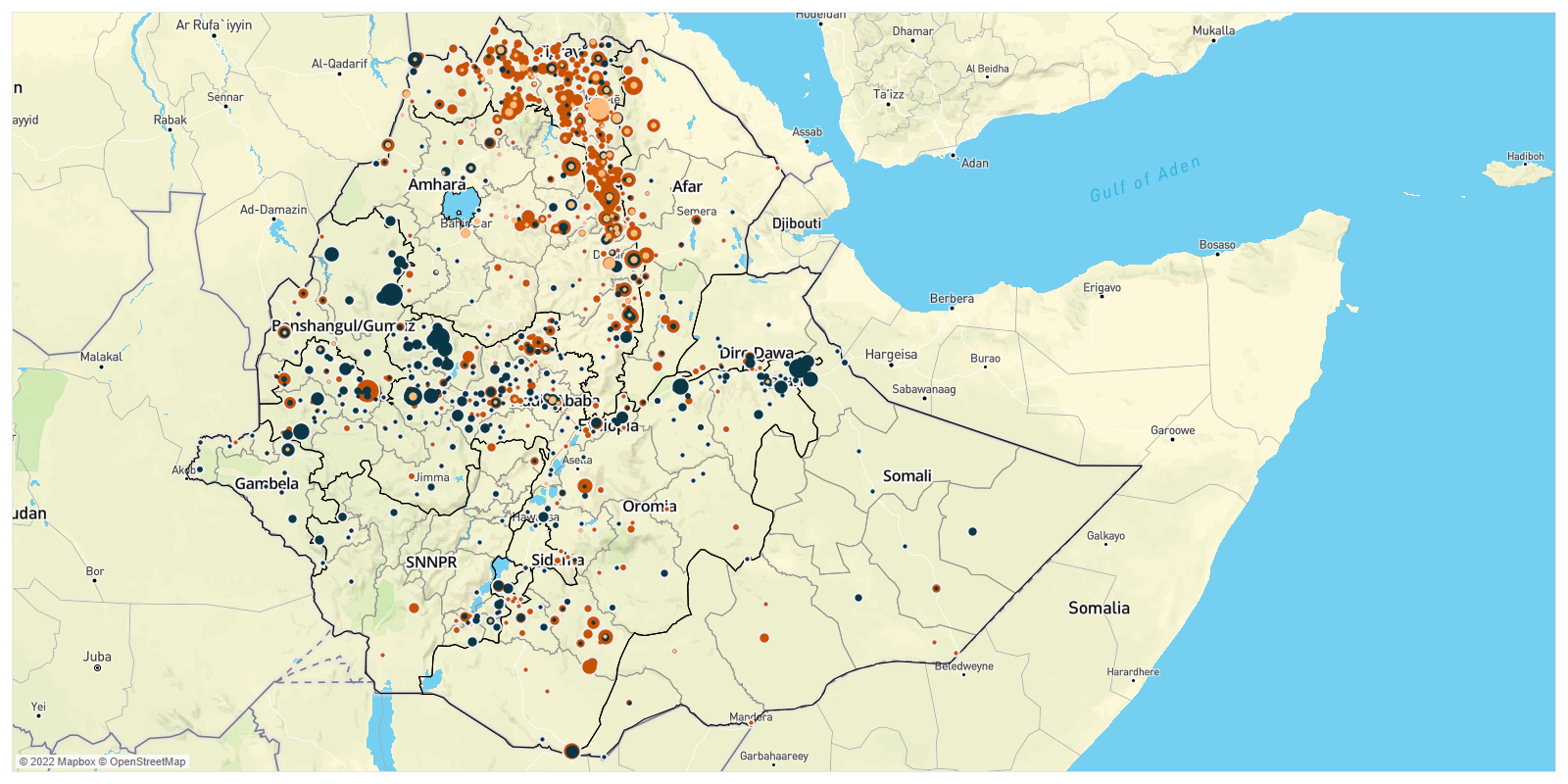 By the Numbers: Ethiopia, 24-30 September 20222Some events from this coverage period might be included in the data in subsequent weeks due to reporting delays. 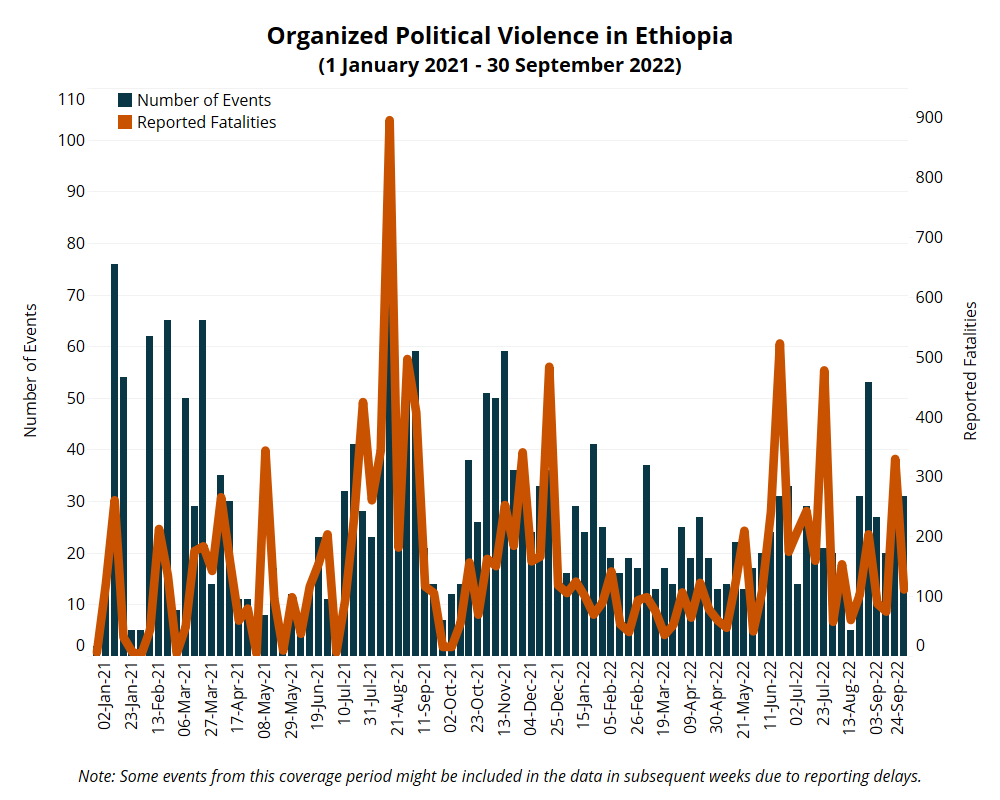 Instability persisted in Oromia region and northern Ethiopia as many people were affected by the ongoing armed clashes and attacks on civilians in both areas. 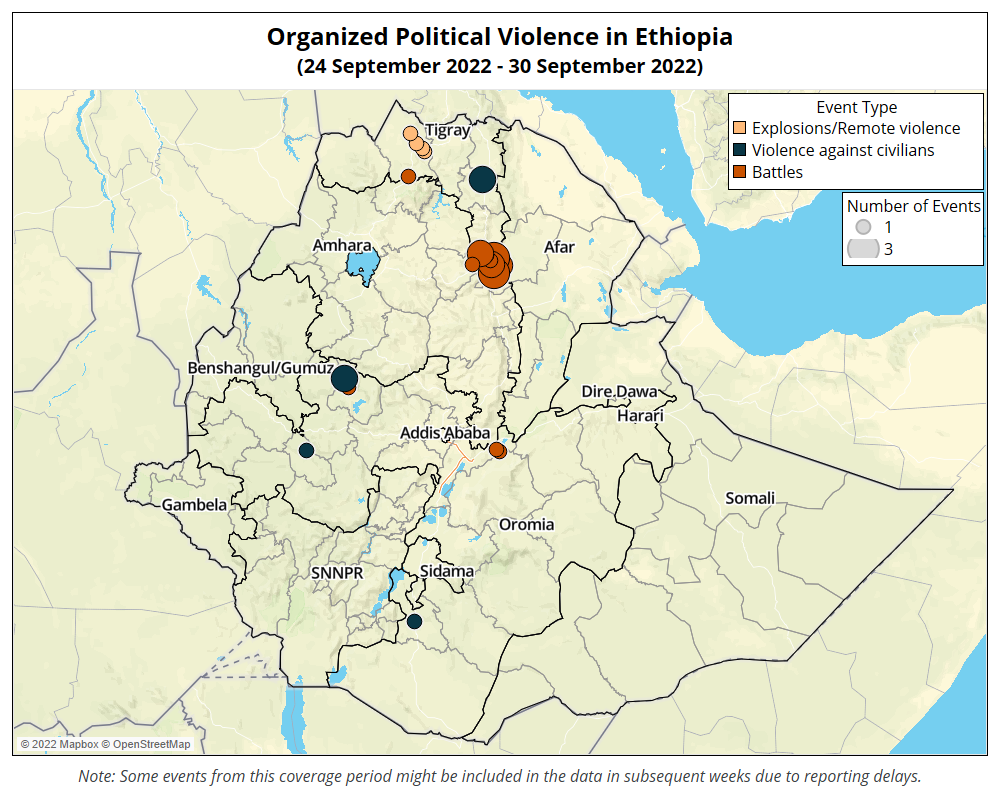 Two days later, on 27 September, the ENDF conducted another drone strike in Adi Daero. At least five civilians were killed and 16 others were injured as a result of the strike. The TPLF claimed the airstrike was conducted by the Eritrean Defence Forces (EDF) using a MiG-29 fighter aircraft (Twitter @TigrayEAO, 29 September 2022). The Ethiopian government stated that its air force conducted a drone attack “targeting the locations of military equipment and arsenals of the TPLF” and said “Ethiopian National Defense Forces ensure that military assets are isolated from civilians before taking action.” The government claimed that “the airspace of Ethiopia has been under strict surveillance,” suggesting it wished to distance itself from accusations that the EDF conducted the airstrike in Adi Daero (Ethiopia Current Issues Fact Check, 30 September 2022).

Attacks on civilians also continued in the region. Last week, two extrajudicial killings by government forces were reported in Buno Bedele and West Guji zones. Government forces arrested more than 1,000 people in seven woredas of West Guji zone. The arrestees were accused of supporting the OLF-Shane “logistically” by “sending their children to become members of the OLF-Shane” and having links with the OLF-Shane (ESAT, 28 September 2022). The Adama town Security and Administration Office announced that the federal police, Oromia regional special forces, and regional state police arrested 33 members of the OLF-Shane and Abba Torbe – a group allegedly affiliated with the OLF-Shane – and 49 members of the TPLF in Adama town in East Shewa zone over suspicion of “planning to incite violence and disturb Meskel and Irreecha celebrations” (Addis Maleda, 29 September 2022).

For the past three years, civilians have been victims of attacks by the OLF-Shane in all Wollega areas – East Wollega, West Wollega, and Horo Guduru Wollega zones (see EPO Monthly: June 2022 for more details on violence against civilians in Oromia region). Amhara civilians are specifically targeted. These three zones host large communities of ethnic Amharas who were resettled to these areas from Wello areas of Amhara region during the 1980s drought in Ethiopia (Kassa Belay, 2004; Dessalegn Rahmato, 2003). ACLED data show that such attacks became more frequent throughout 2021 and 2022. Tensions between the government and Amhara communities are rising due to the failure of the government to protect civilians in these areas. In turn, these attacks are forcing Amharas to defend themselves in these areas, and in other areas in Oromia region bordering Amhara. ACLED data indicate that Amhara ethnic militias have been mainly involved in political disorder events since 2021, while Fano militias began to attack civilians in Oromia region this year. During the celebration of Irreecha – a thanksgiving day celebrated by Oromos – in Addis Ababa on 1 October, a protest against Amhara ethnic militias and the killings in Horo Guduru Wollega zone, and Wollega in general, occurred (DW Amharic, 1 October 2022). This creates another tense relationship between Oromo and Amhara communities, representatives, and governments.