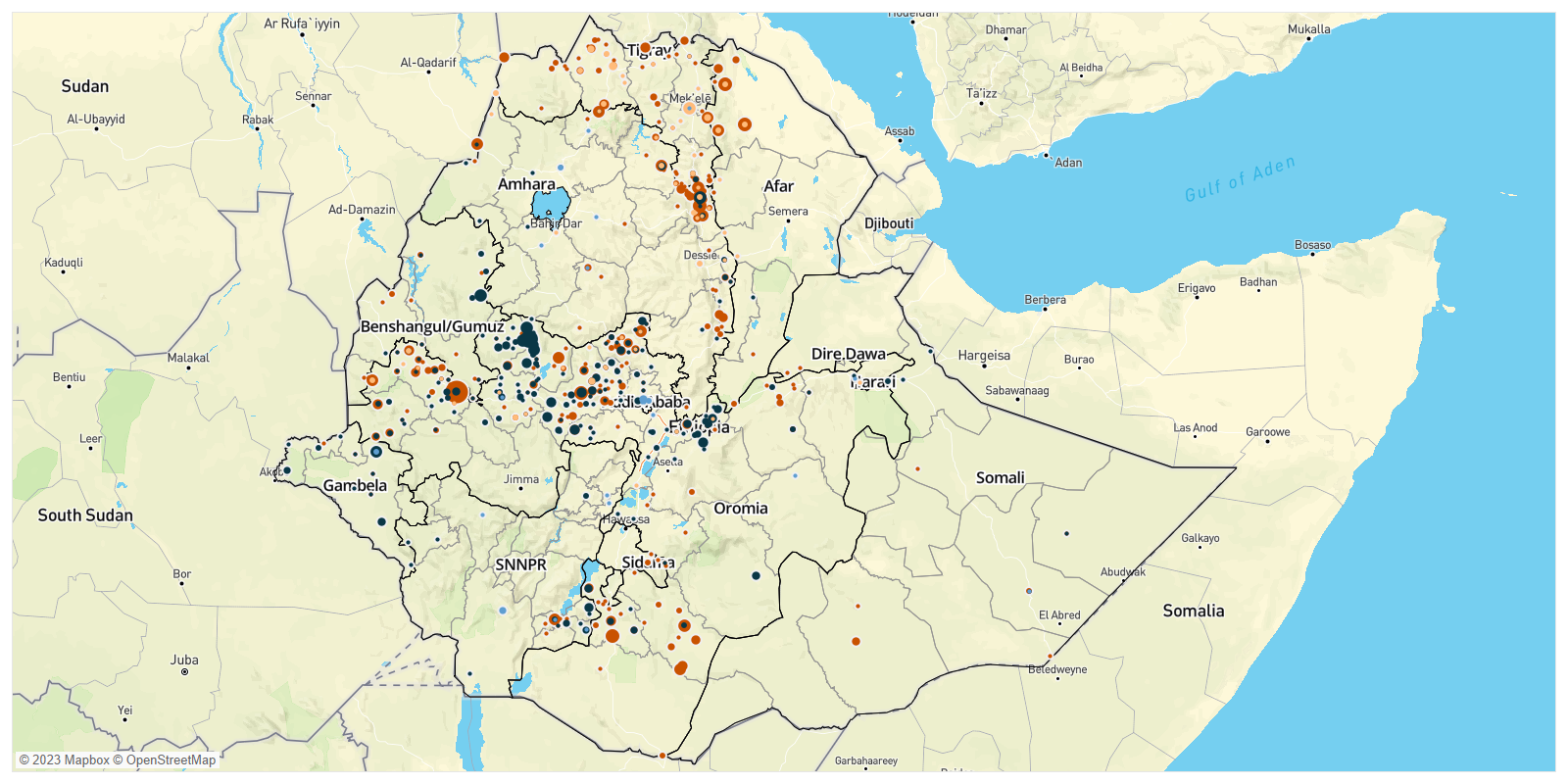 By the Numbers: Ethiopia, 7-13 January 20231Some events from this coverage period might be included in the data in subsequent weeks due to reporting delays. 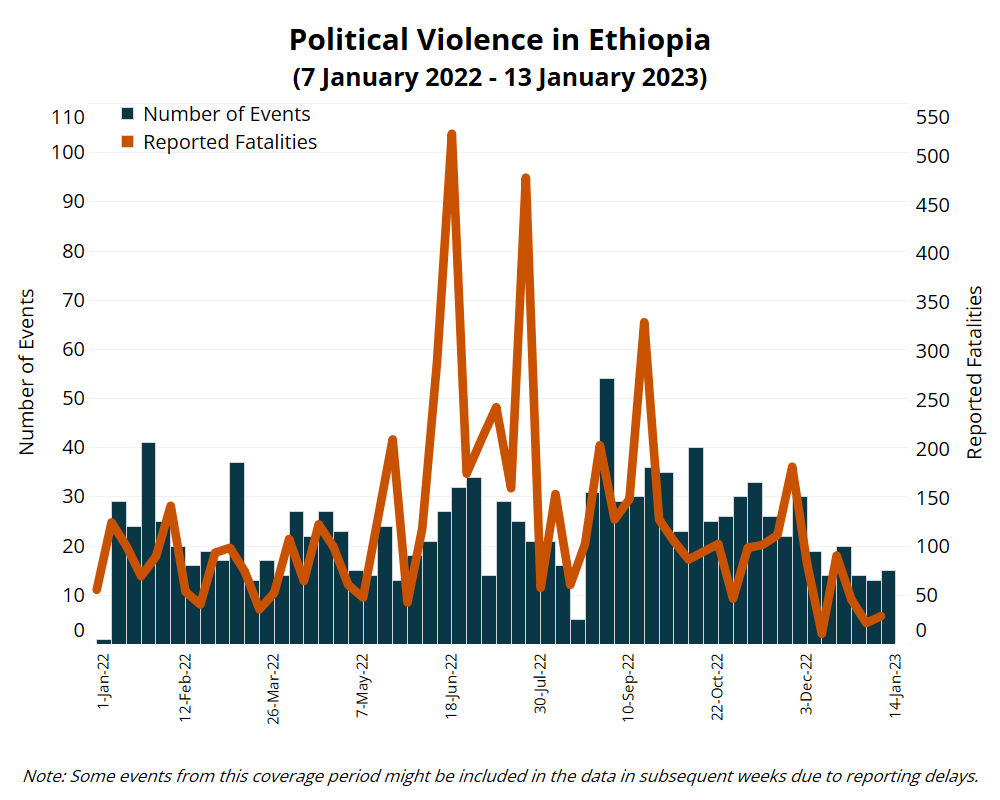 Last week, the signatories to the Tigray peace agreement took several measures to implement the peace deal signed on 2 November 2022. In the meantime, political violence continued unabated in Oromia region.

On 10 January, Tigray People’s Liberation Front (TPLF) forces – also known as the Tigray Defense Forces – began handing over heavy weapons to the Ethiopian National Defense Force (ENDF) in a camp located in Agula in Eastern Tigray zone in Tigray region.2Tigrai TV, 10 January 2023; Tigrai TV, 10 January 2023 Members of the African Union Monitoring, Verification and Compliance Mission were present to fulfill their role as witnesses to the disarmament process as specified in the Permanent Cessation of Hostilities Agreement.3Tigrai TV, 10 January 2023; The Ministry of Foreign Affairs of Ethiopia, 4 November 2022 One day later, on 11 January, members of Amhara regional special forces withdrew from Shire town in North Western zone and the surrounding areas in Tigray region as part of the agreed withdrawal of non-ENDF forces from Tigray region. Eritrean forces are reported to have been withdrawing from Tigray region, although some troops remain in border areas.4Reuters, 30 December 2022; BBC Amharic, 30 December 2022 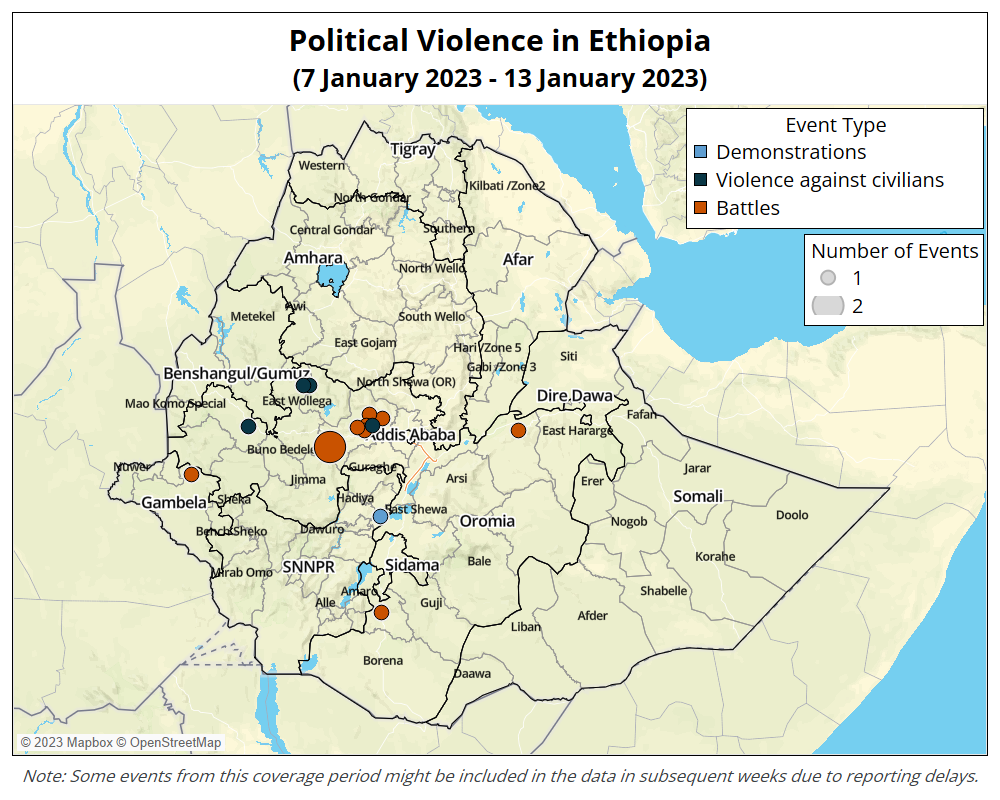 In Southern Nations, Nationalities and Peoples region (SNNPR), on 9 January, SNNPR prison guards shot and killed one prisoner and injured another after they, along with two other prisoners, sprayed red pepper at the prison guards in an attempt to escape while they were returning from court to Alaba Prison. The two other prisoners managed to escape.

On 13 January, the Joint Peace and Security Task Force announced that the task force arrested 371 people, including 109 Fano militia members and 107 OLF-Shane members, in the capital city, Addis Ababa, and the surrounding Oromia special zone in Oromia. The detainees were suspected of “planning to incite violence in the area and heighten ethnic tensions during the Ethiopian Christmas holiday celebration,” which was celebrated on 7 January.5 Ethiopian Federal Police, 14 January 2023

Despite some protests from communities that were left out of the new city’s boundaries, Oromia region’s new “Sheger City” was established last week by merging towns, districts, and some villages located within the Oromia special zone surrounding Addis Ababa.6Addis Standard, 9 January 2023 The move marks an important development in Oromia region, and updates regarding the new city will be followed closely by the EPO team.