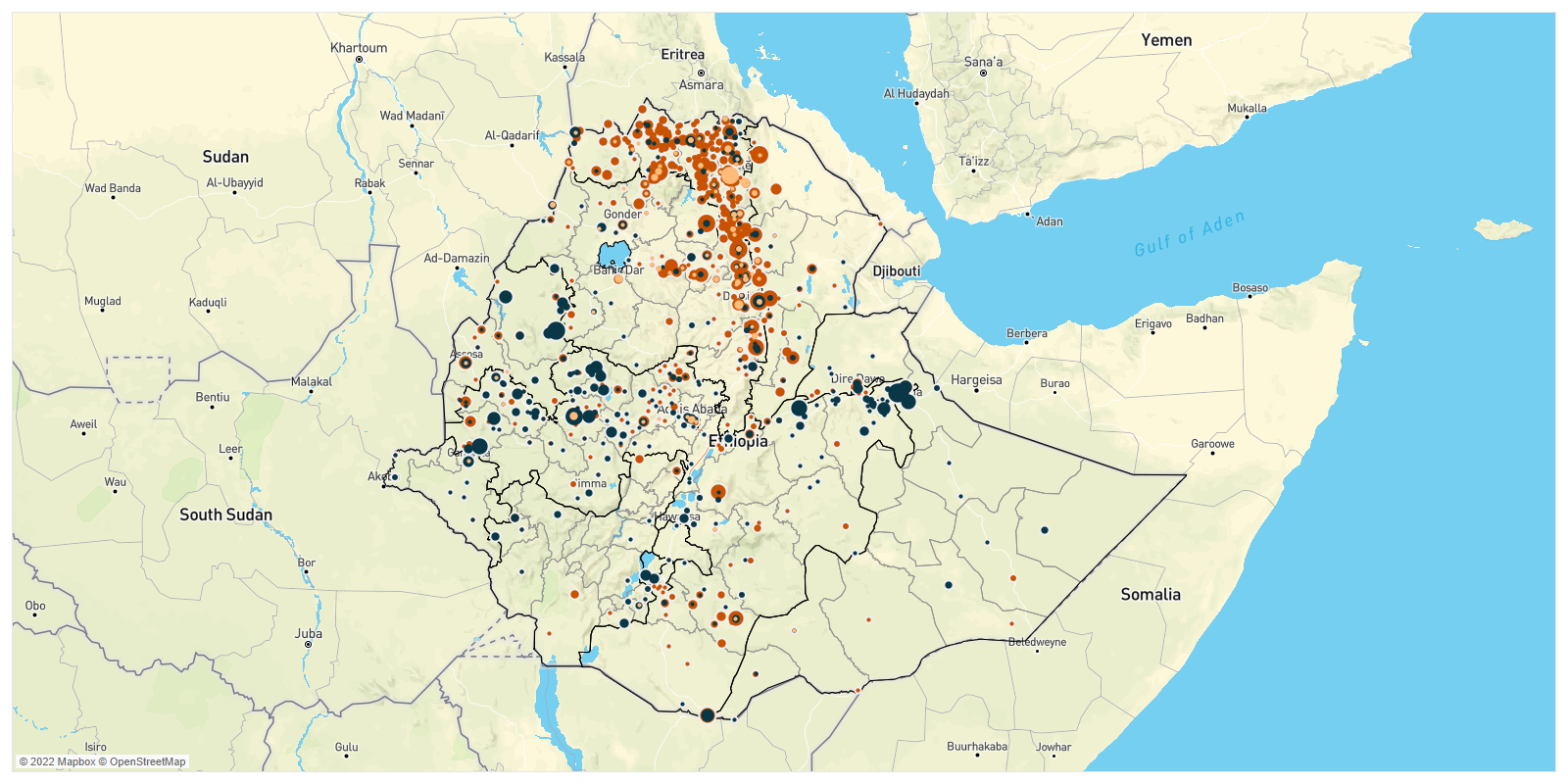 By the Numbers: Ethiopia, 5-11 February 20222 Some events from this coverage period might be included in the data in subsequent weeks due to reporting delays. 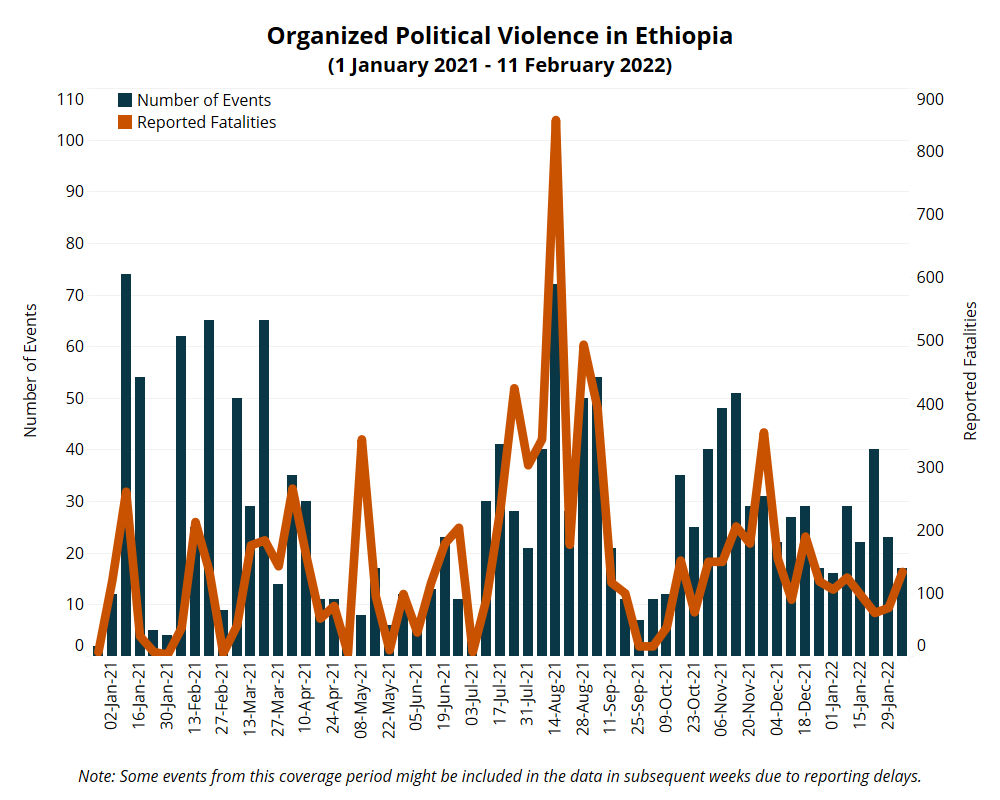 Last week, armed clashes between the Tigray People’s Liberation Front (TPLF) forces and Afar regional special forces and militias continued in Kilbati Rasu-Zone 2 in the Afar region. The Ethiopia National Defense Force (ENDF) also conducted an airstrike targeting the TPLF forces and clashed with the group in Kilbati Rasu-Zone 2. Armed clashes were reported in Berahle, Konneba, Magale, and Erebti areas (see map below). The Afar regional government stated that TPLF’s renewed armed clashes in the region through Kilbati Rasu-Zone 2 is to control Serdo checkpoint, a vital location along the Ethiopia-Djibouti route (DW Amharic, 9 February 2022). The Serdo checkpoint regulates traffic to Ethiopia’s only access to the sea via the Djibouti port. 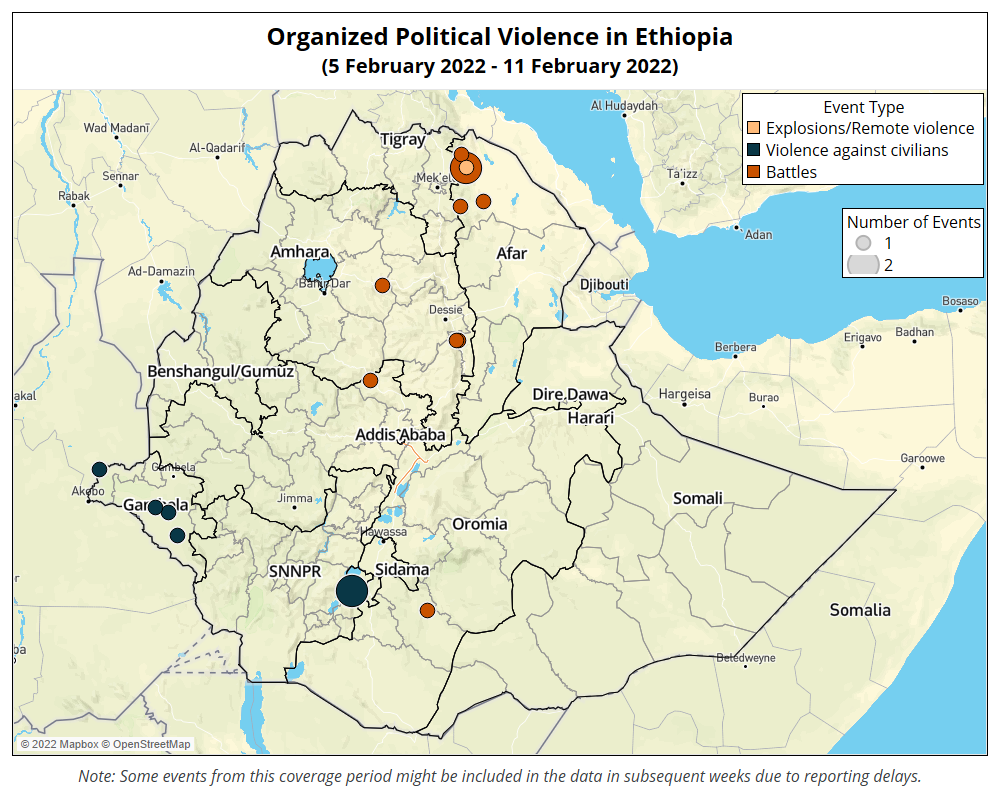 In the Oromia region, ACLED data recorded attacks on civilians and armed clashes involving the Oromo Liberation Front (OLF)-Shane last week. On 5 February, members of OLF-Shane reportedly ambushed an ENDF military patrol in Wadera woreda in the Guji zone. Two days later, an unidentified armed group, suspected by some witnesses to be OLF-Shane, attacked three trucks, killing three civilians and injuring four others in Yemekera Daget (Ershan Ano) area in Gelana woreda in the West Guji zone. The armed group also looted the products the trucks were transporting. In another incident on 9 February, members of OLF-Shane attacked a transport truck as it was passing through the Koticha area in Wara Jarso woreda in the North Shewa zone in the Oromia region and killed the driver (DW Amharic, 9 February 2022). This attack prompted clashes with the local police forces. Truck drivers who frequently travel from the Amhara region to Addis Ababa expressed fear of traveling through this area due to these attacks. The drivers also expressed their fear of being attacked by an unidentified armed group in the Amhara region. According to the drivers, in some areas of the Amhara region, truck drivers are being abducted and attacked by unidentified militants (DW Amharic, 14 February 2022).

Last week, the government officially reported regaining control of Gidami woreda of Kellem Wollega zone in the Oromia region. OLF-Shane had been in control of the area for a couple of months and government forces regained control of this area on 17 January. After the government forces took over, a mass grave of 87 people was discovered, and government officials indicated that several dozen other people were still missing throughout the area (Ethiopian Broadcasting Corporation, 7 February 2022). Most of the victims are believed to be ethnic Amhara civilians who were relocated to these areas in the 1980s from drought-affected parts of the Amhara region. Additionally, OLF-Shane reportedly abducted 105 and 63 civil servants from Gidami and the neighboring Kondala and Begi woredas respectively when the group controlled these areas (DW Amharic, 14 February 2022). The spokesperson of OLF-Shane denied this allegation and instead accused the state media of “fabricating” the report because, according to him, the government forces are “in danger of encirclement” by OLF-Shane forces (Twitter @OdaaTarbiiWBOi, 8 February 2022).

Furthermore, the ENDF and Federal Police in the Oromia special zone of the Amhara region reportedly attacked OLF-Shane training camps in Duwe Hara in Dewa Cheffa and Sinqele, killing 100 fighters. 600 OLF-Shane fighters were also reported to have been arrested following the destruction of these camps (Ethiopian Broadcasting Corporation, 7 February 2022). The zone has been the site of intense violence throughout the past year. Government forces crackdown on OLF-Shane militants led to the imprisonment of “thousands” and the death of many civilians (Addis Standard, 15 February 2022).

Also in the Amhara region, on 7 February, a group of unidentified gunmen attacked a prison, a police station, and a local militia office in Nefas Mewcha woreda in the South Gondar zone, looting weapons and breaking prisoners out of jail. Sixteen members of the unidentified gunmen were killed and 20 others were captured. Three members of government security forces were also injured (DW Amharic, 8 February 2022). The Amhara Regional Police Commissioner indicated that this armed group identifies themselves as “Fano” but refuted claims that they were part of the militant structure (Amhara Media Corporation, 8 February 2022). Fano militias are often informal in nature and difficult to identify (for more on Fano youth militia, see this Actor Profile). In the Amhara region, irregular militias – including Fano groups– were armed and trained for the purpose of combating the TPLF. The informal nature of these militias has worried the government, and at the end of January, officials were discussing integrating the group into existing security structures (Fana Television, 28 January 2022).

In the Gambela region, members of the Murle militia from South Sudan continue to cross the border and attack civilians in different zones of the region. Last week, they conducted three attacks in the region, killing four civilians. On 9 February, the group attacked a refugee camp in the Ukubu area in Dimma woreda in the Agnewak zone, injuring two women and abducting three children. The next day, they shot and killed one civilian in Gog woreda in the Agnewak zone. On 11 February, members of the group attacked civilians and killed three people in Jangjor kebele in Gog woreda. Furthermore, unidentified assailants attacked a truck and killed the driver and his assistant while traveling from Gambela city to the Nuer zone. Federal Police and Gambella regional security forces are working together to investigate the attacks and find the abducted children (FDRE Government Communication Service, 11 February 2022). Attacks by Murle militia from South Sudan have increased in the past three weeks. The highest number of attacks in a single week in 2022 was recorded last week.

Weekly Focus: Opposition Parties in Ethiopia Pressure the Government Due to Worsening Violence

Despite the Ethiopian government’s efforts to expand the size of ENDF, multiple ongoing crises have stretched the government’s resources. The government’s perceived inability to respond to ongoing violence in Afar and western Oromia prompted heavy criticism during the week from opposition parties throughout the country.

Ongoing clashes in the Afar region have reached the residential towns of Magala, Konneba, and Berahle, threatening civilian lives and safety (UNOCHA, 10 February 2022). Authorities in the Afar region estimate as many as 430,000 people have been displaced since renewed fighting began last month, many as a result of heavy shelling that destroyed residential buildings (DW Amharic, 9 February 2022). Authorities also indicated that while the Ethiopian air force was backing Afar regional special forces and militias battling TPLF forces, very little support was being provided by the ENDF ground troops (DW Amharic, 7 February 2022).

Similar claims were made by local administrators in West Guji, where local security forces overwhelmed by these challenges “called for the federal government to intervene to find a lasting solution to the crisis” (Addis Standard, 10 February 2022).

According to the Ethiopian Constitution, federal forces – ENDF and Federal Police – are allowed to intervene in regional security matters upon invitation from the regional authorities, or in cases where the regional security forces are unable to control a deteriorating security situation (FDRE Constitution 1995, Article 51 (14)). In all other cases, security matters are the responsibility of the local or regional governments.

A number of Ethiopian opposition parties issued statements last week criticizing the government’s weak response to renewed fighting and displacement. The National Movement of Amhara (NaMA) and Ethiopian Citizens for Social Justice (EZEMA) released a statement regarding the killings in West Wollega and Kellem Wollega zones in the Oromia region. NaMA accused the government of failing to take action to protect Amharas in the region and called for the government to take action against the perpetrators of violence and bring them to justice (National Movement of Amhara, 9 February 2022). Similarly, EZEMA called for the government to take prompt action against OLF-Shane. EZEMA accused the Oromia regional government of failing to protect the civilians from identity-based attacks and claimed that the regional government’s negligence is a sign of providing institutional support to OLF-Shane (Ethiopian Citizens for Social Justice, 8 February 2022).

Tensions between opposition parties and the ruling Prosperity Party often worsen in times of increased instability. In April 2021, anti-Prosperity Party protests denouncing government inaction swept through the Amhara region following targeted violence in the Oromia special zone of the Amhara region and in the Oromia region (see EPO Monthly: April 2021). During the course of the conflict against the TPLF, NaMA has accused the government of blundering mistakes several times. Last week, NaMA expressed its fear of TPLF forces reorganizing and re-attacking the Amhara region. As a result, NaMA called for the federal government to provide the necessary assistance to the Afar region as well as to the people of Raya and Tselemte in order to repulse TPLF forces attacks in these areas (National Movement of Amhara, 9 February 2022).

Despite these criticisms, the government has made several efforts toward improving the security situation in the country. The Ethiopian House of Representatives met on 14 January to discuss ongoing violence and is expected to lift the state of emergency which was implemented on 2 November 2021 (For more information on the state of emergency, see EPO Weekly: 30 October-5 November 2021). According to the Speaker of the House, Tegesse Chafo, government forces are preparing to “take remedial measures” in conflict areas of Amhara, Afar, Benshangul/Gumuz, Gambella, and Oromia regions (House of Peoples Representatives of FDRE, 14 February 2022). Widened operations are already in motion in areas of the Kellem Wollega zone of the Oromia region (EBC, 8 February 2022). Federal forces are also undertaking major efforts to combat the smuggling of illegal weapons and ammunition and regularly seize shipments moving toward conflict areas (Ethiopian Broadcasting Corporation, 10 February 2022).

In addition to domestic efforts, the Federal Police commissioner, General Demelash Gebremichael, met with a top officer from the Kenyan National Police Service Commission to discuss shared security concerns. The two officials agreed to launch a “joint operation” against OLF-Shane and Al-Shabaab militants (Fana BC, 15 February 2022).

Regional government officials have also been engaged in efforts to improve security across the country. During the week, the Oromia regional president visited several regions of the country, furthering an agenda that included peace and security coordination and support for the reconstruction of damaged areas; an indication that regional authorities may be trying to foster better internal communication (Ethiopian Broadcasting Corporation, 11 February 2022). Last week, Gambela’s regional president visited South Sudan in an effort to stem cross-border violence (VOA Amharic, 2 February 2022). In the Amhara region, regional authorities have established an office specifically tasked with the reconstruction of war-torn areas (Ethiopia Insider, 3 February 2022).