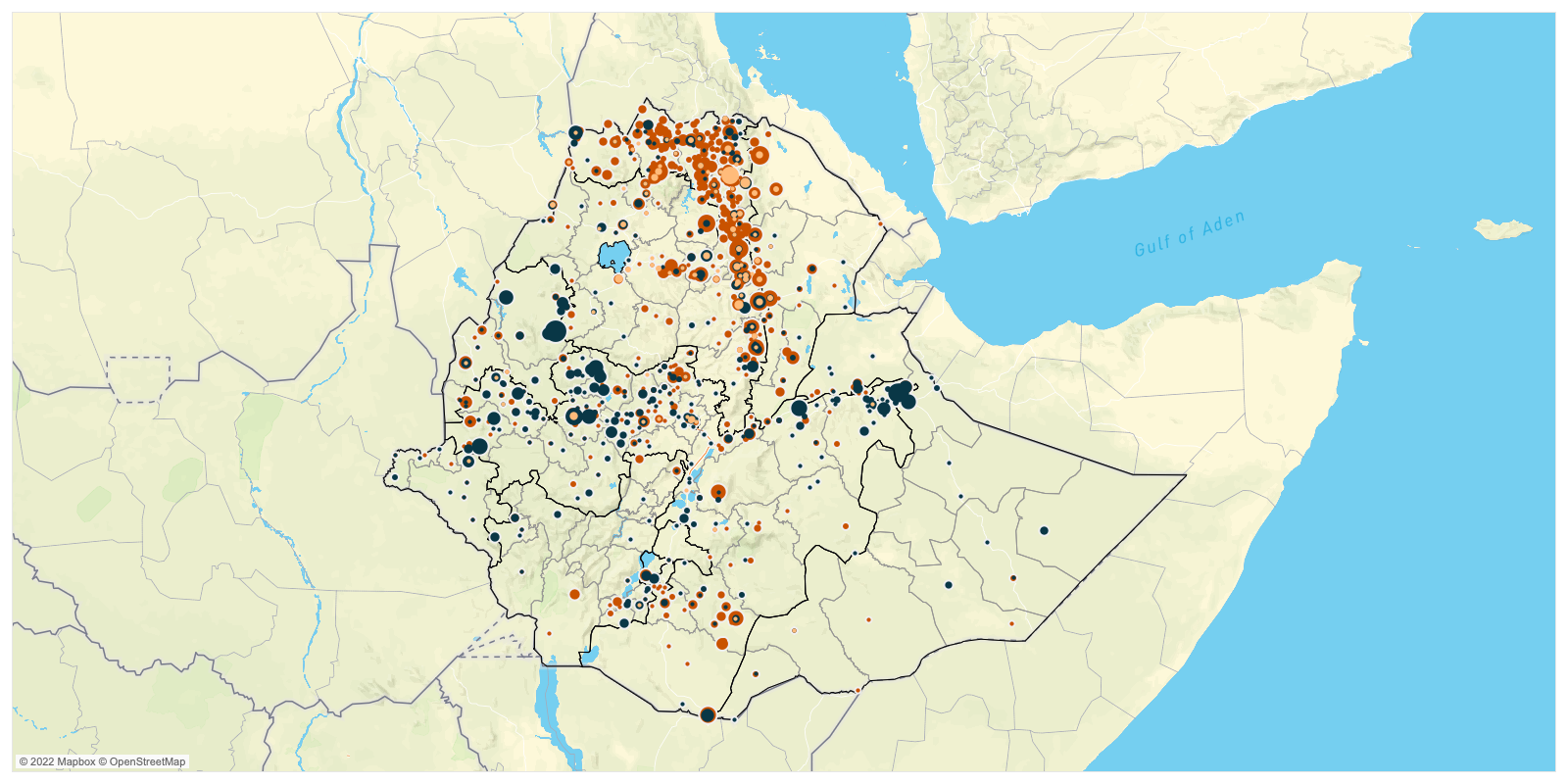 By the Numbers: Ethiopia, 14-20 May 2022 2Some events from this coverage period might be included in the data in subsequent weeks due to reporting delays. 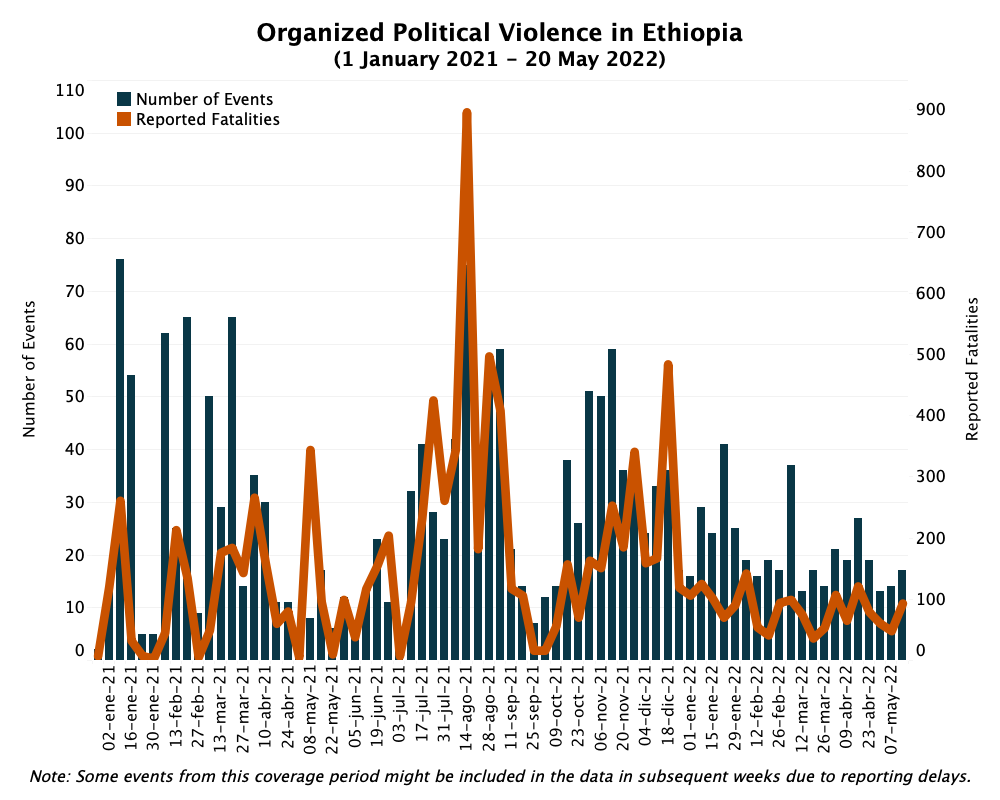 Last week, clashes and mass arrests were reported in Amhara region, as regional forces cracked down on Fano militias and political Amhara ethno-nationalist groups. These incidents and their impact are covered in the weekly focus below. In addition, on 17 May, a landmine reportedly left behind by the Tigray People’s Liberation Front (TPLF) exploded and killed five civilians, including three children, and injured five others in Bati town in Oromia Special zone in Amhara region.

Armed clashes between Oromo Liberation Front (OLF)-Shane and government forces continued in Oromia region. Last week, battle events were recorded in Oda Bultum, Gemechis, and Mieso woredas in West Hararge zone, Melka Balo woreda in East Hararge zone, Yaya Haro kebele in Degem woreda, and Uyu Chebere in Kuyu woreda in North Shewa zone, and Meta Walkite woreda in West Shewa zone (see map below). On 18 May, members of the OLF-Shane attacked the Ethiopian National Defense Force (ENDF) military camp in Kanteri kebele in Sululta woreda in Finfine Special zone. The rebels claimed to have killed 16 and injured over 25 members of the ENDF (OMN, 19 May 2022). Meanwhile, the ENDF stated that 44 OLF-Shane members were killed, and five were captured due to joint operations with Oromia regional security forces in Abote and Werejarso woredas in North Shewa zone (FDRE Defense Force, 21 May 2022). Reportedly, another 233 members of the OLF-Shane peacefully surrendered following a dialogue with elders and Abbaa Gadaas (traditional leaders). 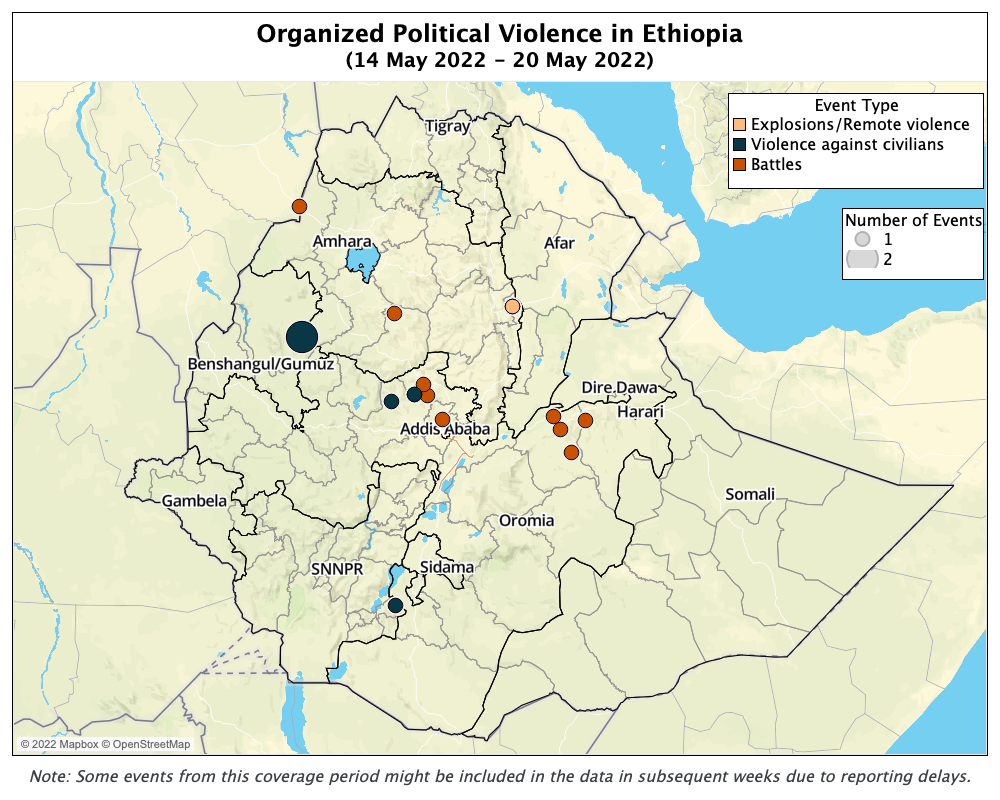 On 15 May, residents of Yaya Gulele woreda gathered in Wabe town in North Shewa zone and rallied against the OLF-Shane and Amhara Fano militias. Meanwhile, attacks against civilians by different actors continued in the region. Last week, government forces believed to be part of the ENDF shot and killed at least four people in Kare Dobi kebele in Gindeberet woreda in West Shewa zone in Oromia region. The reason behind this attack is unknown. On 19 May, an unidentified armed group suspected to be the OLF-Shane opened gunfire and killed three Ethio-Telecom employees near Minare town in Meta Walkite woreda in West Shewa zone. The victims were returning to Holleta after the maintenance of the network in the area.

The OLF-Shane was also involved in two attacks outside Oromia region. On 19 May, members of the OLF-Shane shot and killed two children, who were looking after cattle in Tifate kebele in Amaro woreda in Southern Nations, Nationalities and Peoples region (SNNPR), and looted over 40 cattle. On 14 May, an unidentified armed group opened gunfire on local officials and communal leaders from Bati woreda in Amhara region and Adaar woreda in Afar region who were attending an inter-communal mediation meeting in Chekorsi kebele in Bati woreda in Oromia Special zone in Amhara region. Three people, including the deputy head of the Bati woreda Peace and Security Office, were killed, and at least five others, including the head of Bati woreda Militia Office, were injured (DW Amharic, 16 May 2022). According to one victim, the OLF-Shane is responsible for the attack (VOA Amharic, 16 May 2022). The meeting was aimed at settling the sporadic clashes between pastoralists from Oromia Special zone of Amhara region and Zone 1 of Afar region.

In Benshangul/Gumuz region, two attacks against civilians were recorded last week. Both these attacks were conducted by the ENDF. On 15 May, members of the ENDF shot and killed a man in Gipho kebele in Debati woreda in Metekel zone after accusing him of being an OLF-Shane member. The following day, ENDF soldiers shot and killed a man in the same kebele while he was delivering food to his relatives at a nearby internally displaced persons camp. The reason behind this attack is unknown.

Moreover, ENDF, federal police, and SNNP regional special forces reported that they had arrested around 330 people, including religious leaders, who were accused of being involved in the recent unrest and armed clashes in Derashe Special woreda (VOA Amharic, 19 May 2022). Different weapons were also seized during this operation. Since 27 April 2022, six armed clash events have been recorded in Derashe Special woreda. As a result, banks, governmental institutions, business centers, and roads were closed in the woreda for several weeks (see EPO Weekly: 23 April-6 May 2022 and EPO Weekly: 7-13 May 2022 for more details on these events).

Further, Somali and Afar regional governments held a discussion to resolve the dispute between the two regions. They agreed to withdraw their forces from disputed areas, hold public discussion forums, return internally displaced people to their areas of origin, study the root causes of the conflict, and provide lasting solutions to the conflict (Somali Regional State Communication Bureau, 13 May 2022). The border between the two regions experiences frequent violent conflict due to long-running disputes over contested territory. The conflict is centered around three kebeles inhabited by ethnic Somalis from the Issa clan. These three kebeles are located in Zones 1 and 3 of Afar region and Somali’s Sitti zone. The areas include Adaytu kebele of Mille woreda, Undufo kebele in Gewane woreda, and Gedamaytu kebele in Amibara woreda (For more details on this conflict, see EPO’s Conflict Profile page Afar-Somali Border Conflict).

Tensions between Fano militias and the federal government have been rising in Amhara region over the past few months. Last week, tensions came to a head and several rounds of clashes were reported as regional special forces attempted to arrest or disarm Fano militia leaders. A crackdown on Amhara ethno-nationalist actors, including members of the seat-holding National Movement of the Amhara (NaMA) party, journalists, and individuals throughout Amhara region signifies a new low in the relationship between Amhara ethno-nationalists and the Amhara Prosperity Party.

Fano militias and NaMA politicians are popular in Amhara region, and NaMA representatives hold five seats within the House of Peoples’ Representatives. Despite this popularity, some residents of Amhara region have grown weary of the insecurity that accompanies Fano militias as they move through towns in the region (DW Amharic, 21 May 2022). Their popularity is derived from their attempts to advance Amhara interests in Western Tigray zone, advocacy against the government on issues that concern the protection of Amhara civilians in areas outside of Amhara region, and work in mobilizing fighters against attacks by the TPLF into Amhara region. For this reason, attempts to disband or arrest Fano leaders often result in violence and demonstrations.

Last week, on 19 May, members of Fano and government forces clashed in Mota in East Gojam zone in Amhara region after government forces entered the area and attempted to disarm the group’s members. At least two people were killed and 15 others were injured. Public institutions, banks, schools, businesses, and roads linking the town to Bahir Dar and Addis Ababa cities were closed due to the armed clashes. On the same day, residents and youth gathered in Mota as well as in Merawi town in West Gojam zone, chanting slogans and demanding the release of imprisoned youth. ENDF and Amhara regional special forces fired live bullets at demonstrators and killed an unspecified number of individuals. On 20 May, an unidentified number of people were killed and at least nine others were injured due to a dispute between a group of youth asking for the release of one arrested person and security forces in Woldiya town in North Wello zone (DW Amharic, 21 May 2022). Moreover, Amhara regional special forces and Amhara state police conducted a joint military operation against an unidentified armed group in Metema woreda in West Gondar zone, killing three members of the group whom they accused of kidnapping for ransom.

According to reports, thousands of people have been arrested in connection with the latest crackdown (Reuters, 23 May 2022). Among those arrested are many members of NaMA party and journalists (VOA Amharic, 21 May 2022). A statement by the Ethiopian Human Rights Commission denounced the arrests, calling on government forces to abide by the law. It also noted that many of the detainees, including journalists, had been arrested without a court order and were being held in unknown locations (Ethiopian Human Rights Commission, 22 May 2022).

Various sources indicate that another round of conflict might reignite in the north in the coming few months (DW Amharic, 16 May 2022; Amhara Media Corporation, 13 May 2022). In the last round of conflict, Fano militias played a pivotal role as allies of the federal government against the TPLF. However, given their involvement in other conflicts, it is unlikely that the federal government will continue to tolerate their existence outside of its direct political control. Whether or not federal and regional authorities can enforce disarmament, or integration into existing security command structures, is to be seen. Regardless, the disarmament of the Fano would reduce the federal government’s list of allies should conflict reignite.