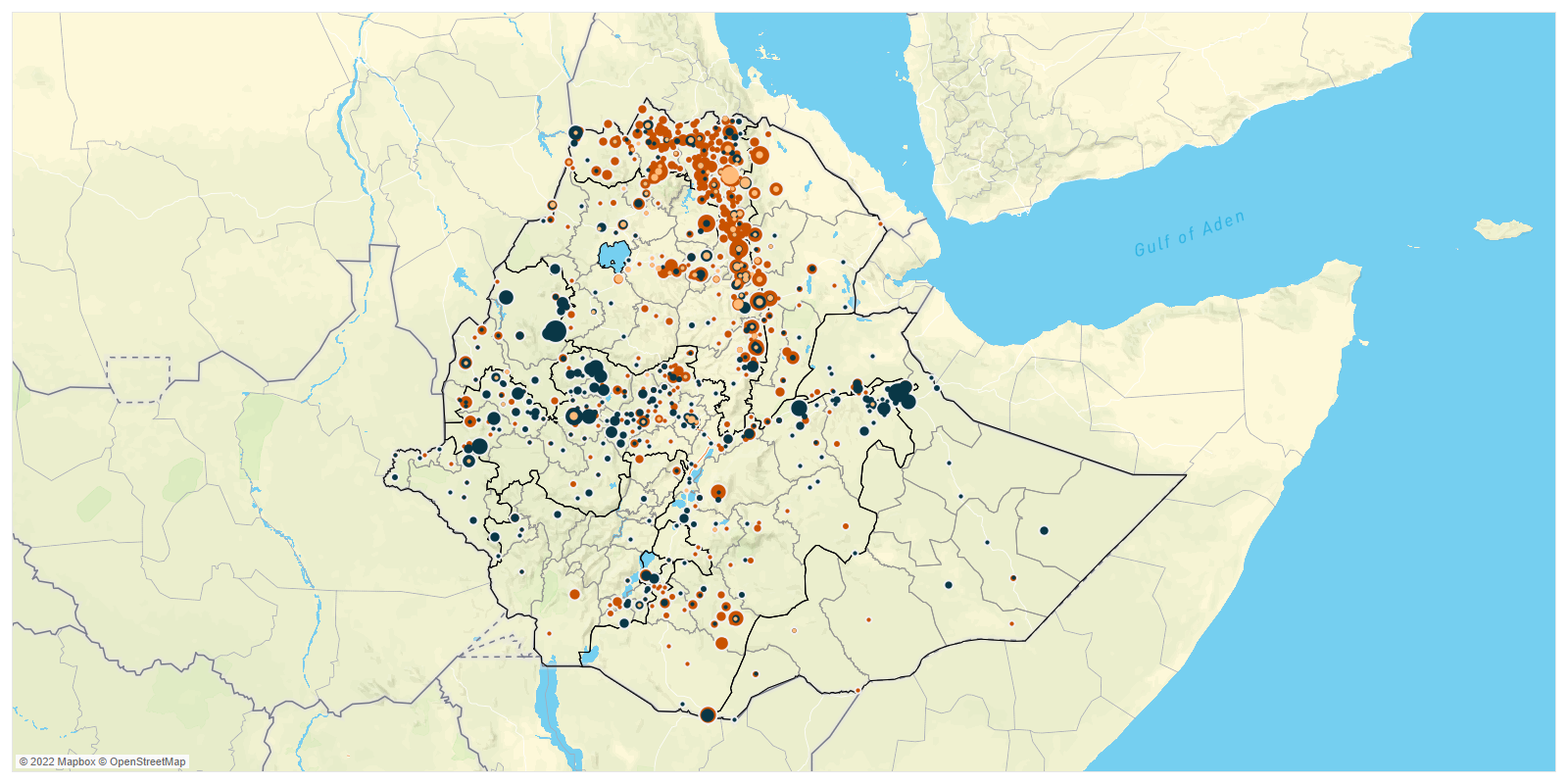 By the Numbers: Ethiopia, 28 May-3 June 2022 2Some events from this coverage period might be included in the data in subsequent weeks due to reporting delays. 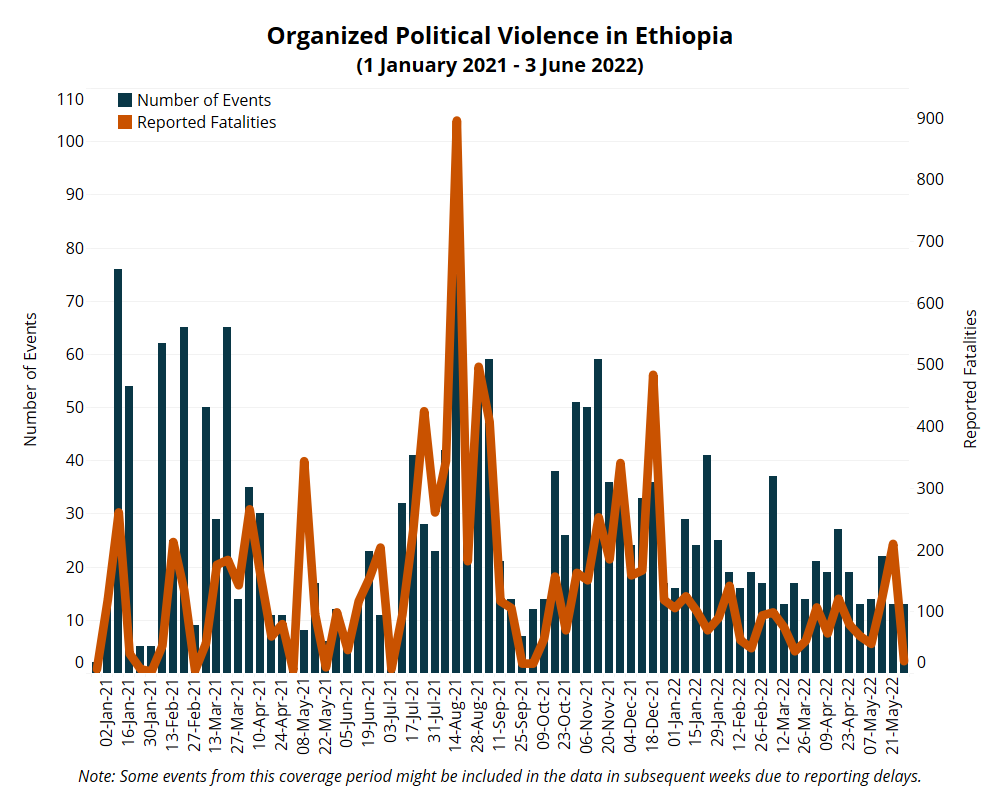 In Amhara region, arrests and armed clashes in connection with the government’s “law enforcement” operations continued (for more information, see EPO Weekly: 21-27 May 2022). According to the Dessie city administration, on 29 May, members of an armed group that claimed to be a Fano militia group threw a grenade at police officers around Kela in Banbewa Weha kifle ketema in Dessie town in South Wello zone. Three police officers were reportedly injured. Witnesses denied this claim and instead insisted that one police officer accidentally shot himself and another police officer after a group of Fano militia gathered in the area to demand the release of arrested Fano members. Rumors that two Fano members had been beaten and arrested by security forces sparked tension in the area last week (EMS, 29 May 2022). On 2 June, police forces, kebele communal militia, and the Ethiopian National Defense Force (ENDF) clashed with an unidentified armed group at Gordem mountain in Meka kebele in Metema woreda in West Gondar zone, killing two members of the armed group and capturing two others.

Last week, the Bahir Dar city administration reported that 223 people were arrested due to the ongoing “law enforcement” operation in the city. In the meantime, on 29 May, at least 25 people were arrested in Negade Behar town in Sir Adagn Chaku woreda in West Gondar zone on suspicion of hiding “bandits” accused of abducting and killing people in the area (EMS, 29 May 2022).

Similarly, in Southern Nations, Nationalities and Peoples region (SNNPR), federal police and regional special forces announced the arrest of more than 1,000 people over the course of the last two weeks, after accusing them of “trying to make the region a center of violence” (VOA Amharic, 1 June 2022). In Addis Ababa, on 2 June, two police officers beat a journalist in Sosetegna Police Station, where he has been held since 26 May 2022. The journalist is one of 18 journalists and media personnel arrested in a crackdown on media over the past two weeks.

In addition, on 2 and 3 June, Afar ethnic militia members and local security forces clashed for two days in Worku Addis area in Argoba special woreda in Amhara region, following the militia’s attack on civilians in the area, resulting in at least one reported fatality and two injuries. These incidents occurred after an ethnic Afar civilian was killed by an unidentified person while returning from the Medina marketplace in Argoba special woreda on 31 May (VOA Amharic, 4 June 2022).

In Oromia region, attacks against civilians continued in the region (see map below). On 30 May, members of government security forces assumed to be the ENDF, reportedly shot and killed five people and injured another two in Irgo Washabo kebele in Illu Galan woreda in West Shewa zone after accusing them of supporting the Oromo Liberation Front (OLF)-Shane. Similarly, On 2 June, security forces, also assumedly members of the ENDF, shot and killed one person and burned down his house in Gomosa Sato kebele in Ambo Zuria woreda in West Shewa zone on an accusation of supporting and hiding members of the OLF-Shane. On 31 May, Amhara Fano militia members burned civilian homes and killed a couple in Darge Koticha village in Jarte Jardega woreda in Horo Guduru Wollega zone. The Amhara Fano militiamen were also reported to have opened gunfire on farmers returning from their farms in Gudina Jiregna kebele in Kiremu woreda in East Wollega zone, killing three women. 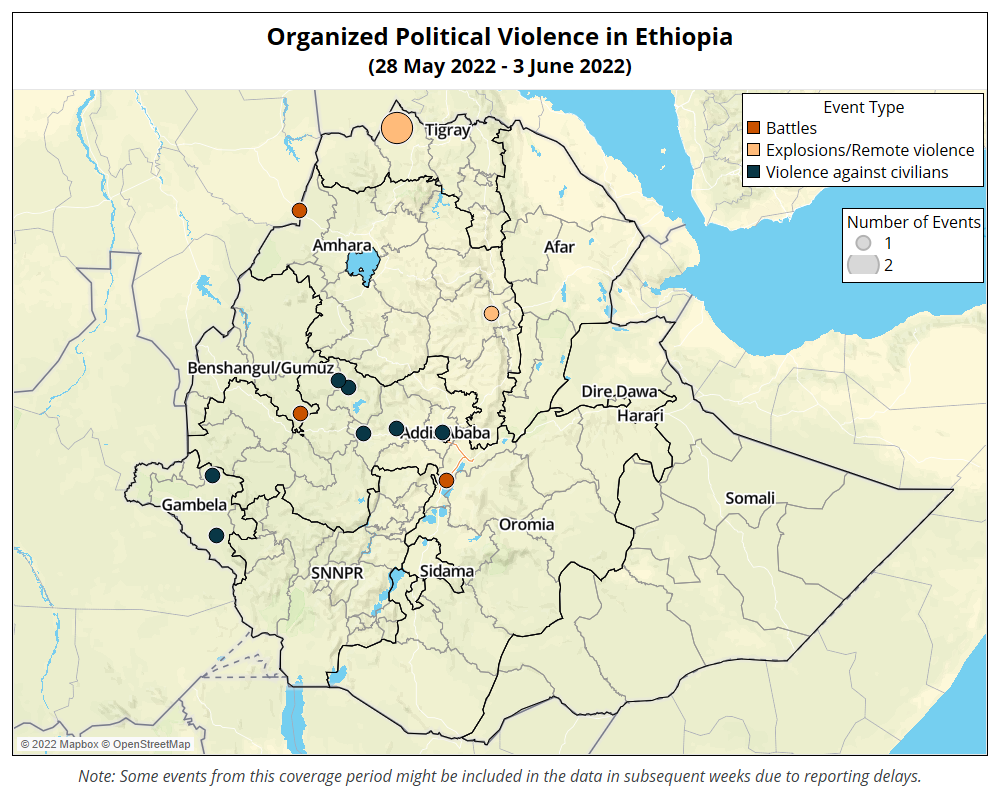 One excessive force against protesters event was also recorded in Oromia region. On 1 June, Oromia regional special forces fired live ammunitions on youth protesters who had gathered in Aweday town in East Hararge zone against the “forced recruitment of youth into military” by the government (OMN, 3 June 2022). The intervention led to one fatality and 17 injuries among the protesters.

In Gambela region, ACLED data recorded two violence against civilians events last week. On 1 June, members of Gambela Liberation Front and OLF-Shane rebel groups shot and killed two civilians while they were farming in Goli kebele in Gambela woreda in Agnewak zone. The armed groups also kidnapped three people during the attack but released them after one day. The next day, Surma ethnic militia members ambushed and killed a farmer near Dimma town in Dimma woreda in Agnewak zone.

In Benshngul/Gumuz region, instability was observed last week after a relative calm during the previous weeks. On 1 June, members of the Gumuz People’s Democratic Movement (GPDM) clashed with regional special forces in Soge town in Miziga woreda in Kamashi zone, reportedly resulting in the killing of 19 people, including 16 members of the GPDM, the Miziga woreda chief administrator, and a local investor and his son. The next day, regional special forces were besieged by GPDM militants in Kamashi town. Following these incidents, the Kamashi zone administration reinstated a curfew and prohibited the use of motorcycles within the zone (Ethiopian Reporter, 5 June 2022; DW Amharic, 3 June 2022). On 19 March, a traditional peace and reconciliation ceremony was held between the regional government and leaders of the GPDM – political and armed wings – in the zone (see EPO Weekly: 12-18 March 2022 for more details on the Kamashi traditional peace and reconciliation ceremony). However, over a week ago, reports indicated that some members of an unidentified armed group who had previously agreed to surrender and voice their demands peacefully had decided to raise arms again in Kamashi zone. The Chief of General Staff, Field Marshal Berhanu Jula, warned that the ENDF would take “all necessary measures against this group” (ESAT, 27 May 2022). After the traditional peace and reconciliation ceremony, some members of the GPDM reportedly refused to disarm (Ethiopian Reporter, 5 June 2022; DW Amharic, 3 June 2022).

However, the Benshangul/Gumuz regional government stated that in the past two months, more than 1,200 members of the GPDM peacefully surrendered and undertook integration training in Metekel zone (DW Amharic, 3 June 2022). Moreover, 493 youths who peacefully surrendered from Dangur and Mandura woredas in Metekel zone began integration training (EMS, 31 May 2022). The Dibate woreda administration stated that over 12,000 internally displaced persons (IDPs) returned to their residences in Dibate woreda in Metekel zone. The Metekel zone command post noted that in the last few months, government forces regained control of 17 kebeles in Dibate woreda due to joint operations by the ENDF, federal police, Amhara and Sidama regional special forces, and local militias against the OLF-Shane and an unidentified armed group (FDRE Defense Force, 31 May 2022). The ENDF claims that since 25 April, it has destroyed the OLF-Shane’s training camp in Bonfo kebele in Dibate woreda, killing 43 members of the OLF-Shane, capturing 60 members of the group, and seizing various weapons (Ethiopian Broadcasting Corporation, 7 June 2022). This kebele had been under the control of the OLF-Shane for the past three years.

Lastly, on 3 June, a traditional peace and reconciliation ceremony was held in Bezirakani Kar Ber at the border of Amhara and Benshangul/Gumuz regions (Awi Communication, 4 June 2022; Awi Communication, 3 June 2022). This ceremony followed a public dialogue between the administration officials, elders, and other stakeholders from Guwang woreda and Chagni town in Awi zone in Amhara region and Dibate and Mandura woredas in Benshangul/Gumuz region (Awi Communication, 3 June 2022). Previously, ethnic militias from both sides sporadically clashed in these areas.

A general calm throughout the month of April and the first part of May has been broken over the past two weeks, with multiple clashes and shellings reported along the Ethiopia/Eritrea border. Despite these incidents, no widespread armed clashes have been reported in Tigray region, although both the Tigray People’s Liberation Front (TPLF) and Ethiopian army have warned that conflict could reignite at any moment (DW Amharic, 16 May 2022; Office of the Prime Minister – Ethiopia, 6 June 2022). Likewise, the Eritrean government claimed that the TPLF was preparing for a new round of conflict, stating that Eritrean armed forces were “ready to take the necessary measures” to defend the country (BBC Amharic, 17 May 2022).

Last week, artillery shellings were reported in Tigray region, and although limited, there is a danger an escalation could reverse the limited progress in humanitarian access gains made during the latest calm — which began at the beginning of April 2022. On 28 and 29 May, Eritrean Defence Forces (EDF) fired multiple rounds of artillery into areas held by the TPLF, striking a school hosting IDPs and destroying houses in Sheraro town in North Western Tigray zone. A 14-year-old girl was killed, and 18 people were injured due to the shellings. According to reports released last week, on 24 May, EDF and TPLF forces clashed in the western part of Adi Awala in Adi Hageray woreda in North Western Tigray zone. The TPLF claimed to have repelled an offensive launched by the EDF, killing at least 120 EDF soldiers, including four military commanders, wounding 195 soldiers, and capturing four others (DW Amharic, 31 May 2022). The Ethiopian government denied the claim and accused the TPLF of provoking the clashes (BBC Amharic, 30 May 2022). The Eritrean government has not yet made any comments on the incident.

The Ethiopian government has been very careful not to admit that it is engaging in talks with the TPLF, although an interview with former Nigerian President, Olusegun Obasanjo – now the Africa Union High Representative for the Horn of Africa region –  indicates that peace talks are ongoing. In a recent interview with the BBC, Obasanjo said that the progress of peace efforts was going “very slowly but steadily.” He went on to clarify that “the situation today is better than it was six months ago” (BBC, 1 June 2022). Prime Minister Abiy Ahmed visited Nigeria last week and Obasanjo was recently in Ethiopia “reviewing potential future development projects” (Office of the Prime Minister – Ethiopia, 6 June 2022). On 31 May, Obasanjo also met with Debretsion Geberemichael, Chairman of the TPLF (Twitter @reda_getachew, 31 May 2022).

Despite these advancements, the situation in Tigray region is still extremely pressing. Ayder Hospital in Mekele, the biggest referral hospital in the region serving more than 300,000 patients, announced that it has stopped pediatric and intensive care unit services effective 29 May due to lack of fuel to run the generator (OCHA, 3 June 2022). While around 320 trucks carrying humanitarian supplies have arrived in Tigray over the past couple of weeks, fuel shortages inside Tigray region have hindered the delivery of humanitarian aid to areas outside of urban centers.

Now is a critical moment in the trajectory of the conflict in Ethiopia’s north. All efforts should be expended to keep diplomatic and humanitarian channels open to facilitate a formal peace solution.