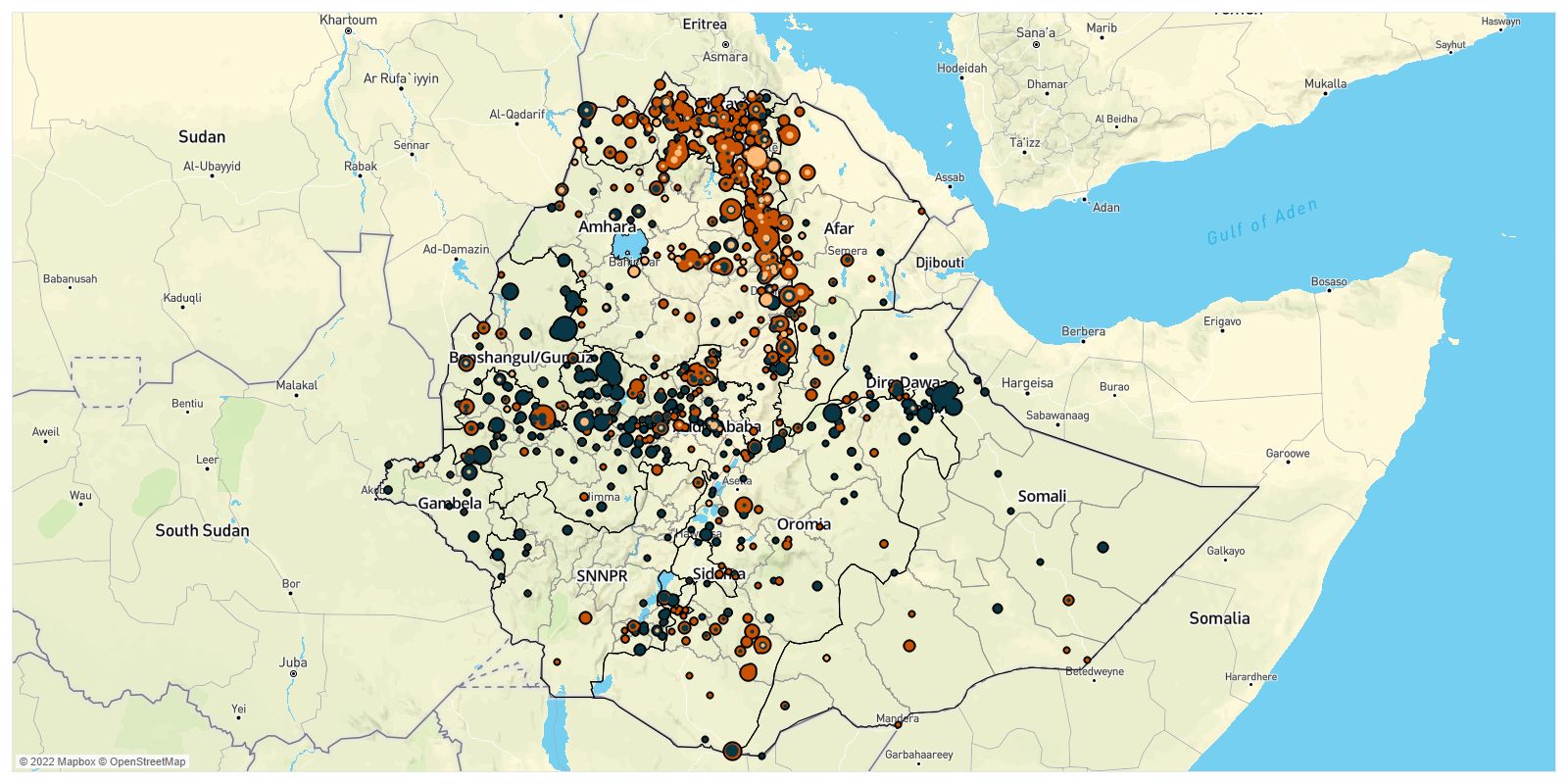 By the Numbers: Ethiopia, 13 August-9 September 20222Some events from this coverage period might be included in the data in subsequent weeks due to reporting delays. 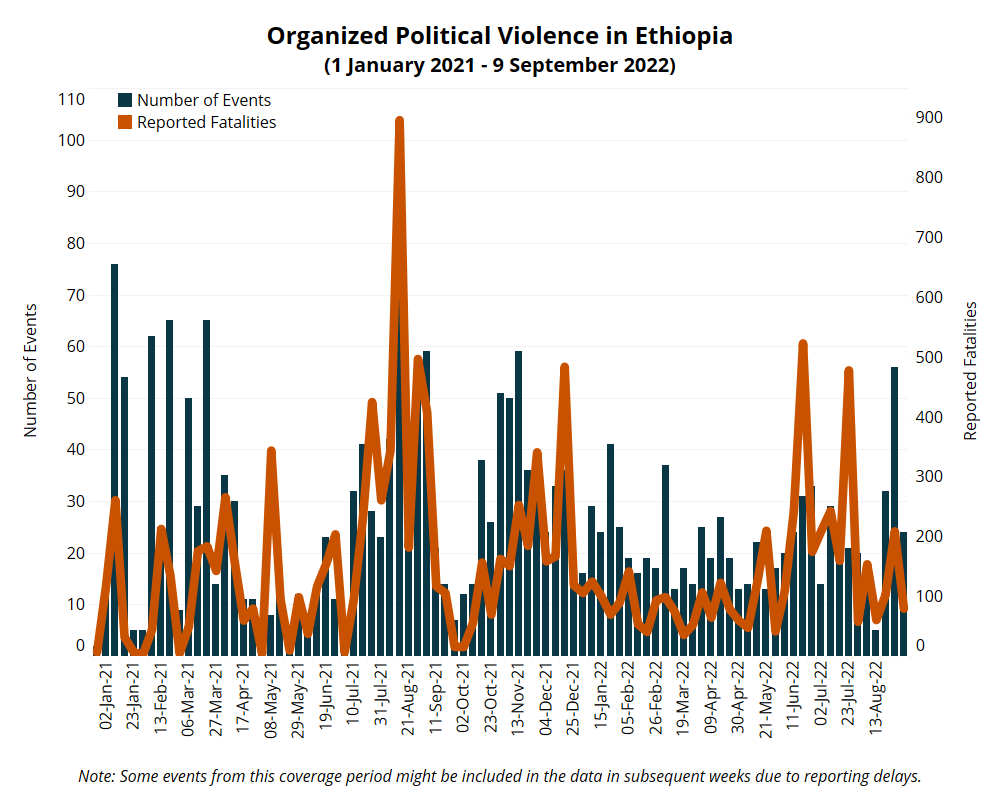 On 24 August, armed clashes between government and Tigray People’s Liberation Front (TPLF) forces erupted again in Afar, Amhara, and Tigray regions. The clashes occurred after five months of relative calm following the declaration of a humanitarian truce on 24 March. Both conflicting parties accused one another of initiating the new round of armed clashes (FDRE Government Communication Service, 24 August 2022; Twitter @TigrayEAO, 24 August 2022).

Quickly, clashes diffused to Fanti Rasu-Zone 4 in Afar region; North Western Tigray, Central Tigray, Eastern Tigray, and Western Tigray zones in Tigray; and Wag Hamra and North Gondar zones in Amhara region (see map below). Battles between ENDF and TPLF forces and Samri militias were reported in the Baker, Bereket, Logdi, and Shererina areas in Western Tigray near the border of Ethiopia and Sudan. 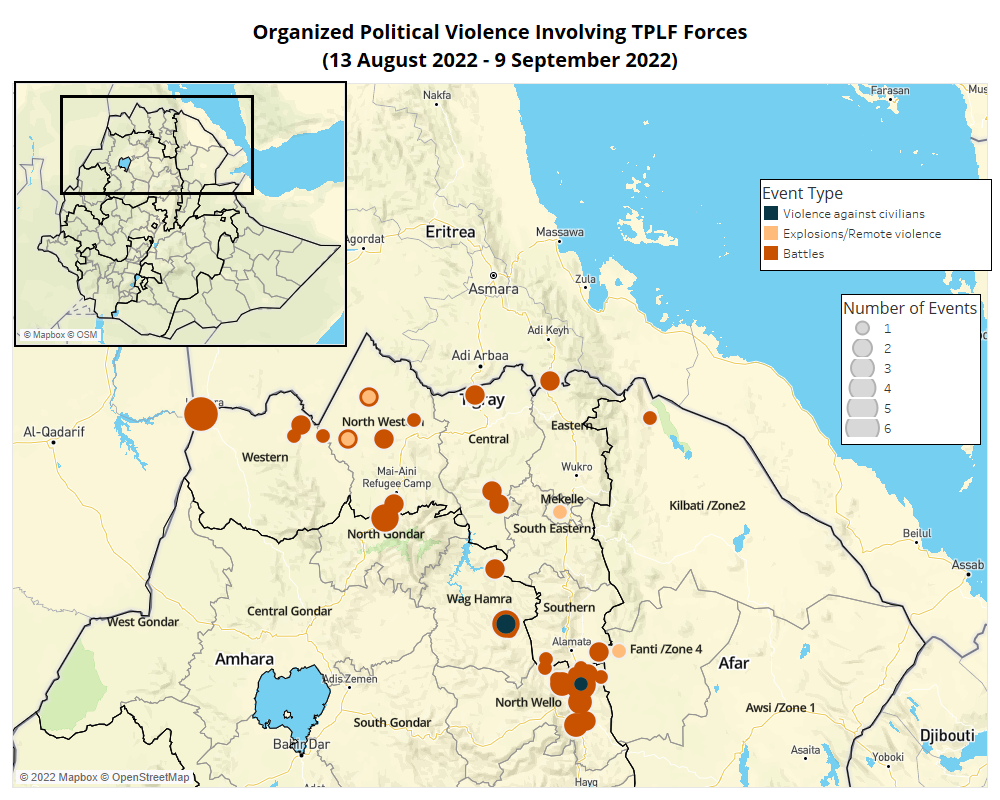 A number of TPLF soldiers involved in the armed clashes at the Ethiopia and Sudan border are reportedly former Tigrayan ENDF members who had previously refused to return to Ethiopia — and sought asylum in Sudan — after serving with the UN peacekeeping mission in Abiye in South Sudan (Bloomberg, 2 September 2022). Several months ago, after Sudan requested Ethiopian troops in the UN peacekeeping mission to be replaced by African countries and Bangladesh troops, 528 Tigrayan peacekeepers in Abyei refused to return to Ethiopia, citing security reasons (Sudan Tribune, 24 April 2022). Despite these reports, the Sudanese Armed Forces (SAF) denied that Tigrayan armed forces/ex-UN peacekeepers are in Sudan (Bloomberg, 2 September 2022). Their stay in Sudan has coincided with a recent UN High Commissioner for Refugees (UNHCR) disclosure that forced military recruitment was taking place at refugee camps in eastern Sudan, where Tigrayans have been taking refuge since the beginning of the northern Ethiopia conflict in November 2020 (Sudan Tribune, 7 September 2022).

Meanwhile, Eritrean Defense Force (EDF) and TPLF forces clashed in Adi Goshu and Tsetser in Western Tigray zone, Rama in Central Tigray zone, and Tserona and Zela Ambesa in Eastern Tigray zone in Tigray region; as well as Dallol in Kilbati Rasu-Zone 2 in Afar region.3This information on the EDF was provided by TPLF. Possible engagement in Afar was recorded because of the location name (a location with this name could not be found in Tigray, but in Afar). On 7 September, the EDF reportedly fired artillery on TPLF positions around Adigrat town.

In the past three weeks, the Ethiopia air force reportedly conducted various drone-assisted air strikes on the capital city of Tigray region, Mekele, including strikes on a children’s playground and hospital (BBC Amharic, 31 August 2022; Reuters, 26 August 2022). The ENDF also claimed to have shot down an Antonov airplane allegedly carrying weapons for the TPLF in an unspecified location in Western Tigray zone. The ENDF stated that the airplane crossed Ethiopia’s air space from Sudan (Fana Television, 26 August 2022). The TPLF denied this accusation (Twitter @TigrayEAO, 24 August 2022). On 26 August, the Ethiopian government asked civilians to avoid areas near TPLF’s military training and camps (FDRE Government Communication Service, 26 August 2022).

Following the latest round of armed clashes, various cities and towns in Amhara region declared nighttime curfews and other restrictions, including forbidding IDPs in their towns from leaving their camps. People accused of having links with the TPLF and spying for the group were arrested in Kobo, Kombolcha, and Debark towns in Amhara region.

The clashes came at a time when many were expecting progress in peace negotiations. Representatives of the US government, the EU, and the General Secretary of the UN have asked all conflicting parties to halt the violent conflict. Various political parties in Ethiopia condemned TPLF forces for allegedly initiating the new rounds of armed clashes in northern Ethiopia, while others demonstrated against the TPLF and held peace rallies in Addis Ababa, Hawassa in Sidama region, and Hosaena town in Hadiya zone in Southern Nations, Nationalities and Peoples region (SNNPR) (Addis Standard, 9 September 2022; DW Amharic, 8 September 2022; Ethiopian Broadcasting Corporation, 30 August 2022). The Ethiopian National Dialogue Commission chairperson called on all parties to put down their weapons and find a solution through dialogue (TIKVAH-Ethiopia, 9 September 2022).

On 11 September, Ethiopian New Year, the TPLF announced its acceptance of African Union (AU)-led peace negotiations with the federal government and indicated its readiness to engage in the negotiations at any time and place with its selected representatives (Twitter @TigrayEAO, 11 September 2022). There are several clear changes to the TPLF’s approach to negotiations since the August clashes: previously, TPLF leaders put forward a list of preconditions to be fulfilled by the federal government and wanted negotiations to be led by former Kenyan President Uhuru Kenyatta (The Africa Report, 22 August 2022; Tigray TV, 18 August 2022; see EPO Weekly: 3-9 July 2021 for more details on the list of preconditions released by TPLF). Further, the TPLF stated the need for all-inclusive political dialogue, including all political parties, with a potential view towards the establishment of a transitional government. The government ignored previous such calls by the Oromo Liberation Front (OLF) and Oromo Federalist Congress. On multiple occasions, the federal government affirmed that the current government is elected based on the constitution and that there will be no transitional government.

Regardless of this recent statement by the TPLF, armed clashes between the two parties and drone-assisted airstrikes by ENDF have continued (VOA Amharic, 13 September 2022; DW Amharic, 14 September 2022).

In Oromia region, both armed clashes and violence against civilians continued, although at a reduced rate – 10 battles and 22 acts of violence against civilians events were recorded in the region between 13 August to 9 September. Armed clashes between the Oromo Liberation Front (OLF)-Shane and the ENDF occurred in Guji, Ilu Aba Bora, Kellem Wollega, North Shewa, West Shewa, and West Wollega zones (see map below). Meanwhile, attacks against civilians were reported in East Shewa, East Wollega, Horo Guduru, Kellem Wollega, North Shewa, South West Shewa, West Shewa, and West Wollega zones. Those responsible for these attacks include Fano militias, the OLF-Shane, Oromia regional special forces, the ENDF, and an unidentified armed group. The highest number of fatalities due to attacks against civilians were recorded in Amru woreda in Horo Guduru zone. On 30 and 31 August, Amhara militias from Addis Alem kebele in Amru woreda and Bure woreda in Amhara region killed at least 60 ethnic Oromo civilians and injured at least 70 others in Amru woreda. Attacks were recorded in Agamsa, Jog Migbar, Tam Eilamu, Jebo Doban, Tombe Danagebe, Jawaj, Gnare, Lege Micha, and Lukuma kebeles (Ethiopia Human Rights Commission, 6 September 2022). This attack was conducted a day after the OLF-Shane entered Abora town — the administrative center of Amru woreda — in Agamsa kebele and killed three ethnic Amharas, while trying to capture the town. The group also disarmed 59 people in the kebele. Oromia regional special forces withdrew from the area on 28 August (DW Amharic, 31 August 2022). Some reports indicate that from 29 to 31 August, OLF-Shane killed 11 people and injured another 11 in Agamsa town. The group also looted branches of the Ethiopian Commercial Bank, Awash Bank, and Cooperative Bank of Oromia in Amuru woreda (Addis Maleda; 3 September 2022). Following these attacks, more than 20,000 people were forced to flee from these areas (Ethiopia Human Rights Commission, 6 September 2022). 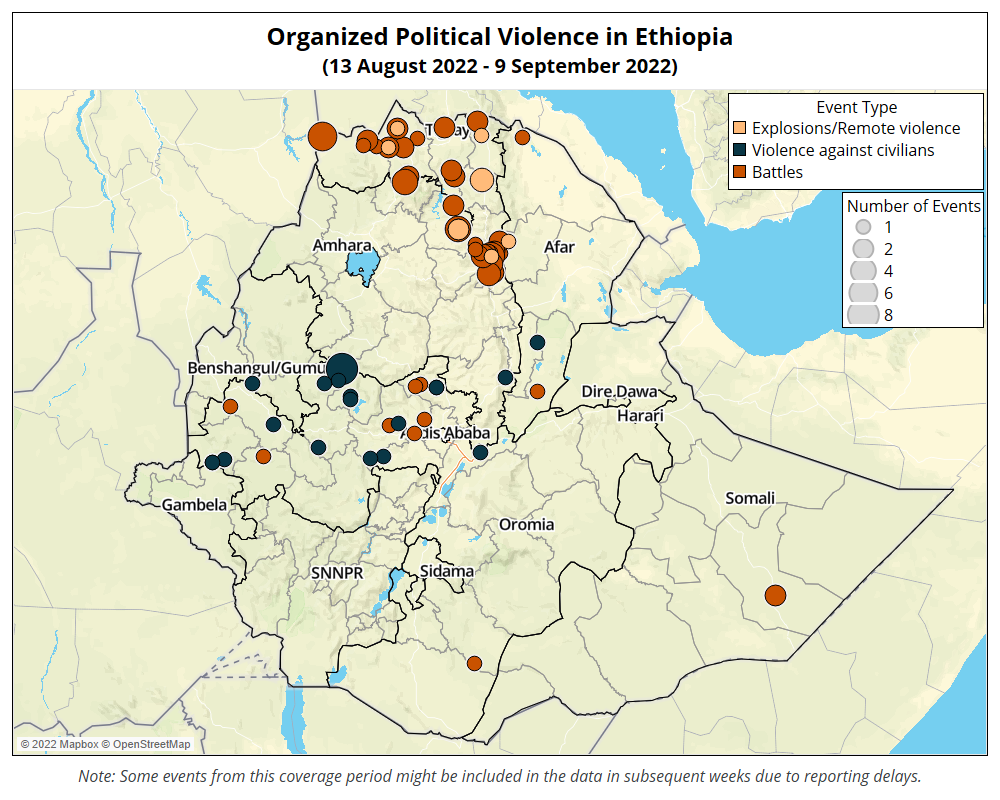 In Amhara region, in addition to the armed clashes between government and TPLF forces on 1 September, an unidentified armed group shot and killed the mayor of Shewa Robit in North Shewa zone. The reason behind this attack is unknown.

In Afar region, conflict reignited in the disputed Gadamaitu area along the Somali and Afar border (for more details on these disputed areas, see EPO’s Afar-Somali Border Conflict). During the week of 17 August, Afar and Somali ethnic militias clashed in Gadamaitu in Gabi-Zone 3. The Somali regional government stated that around 60,000 ethnic Somalis were forced to flee the area (VOA Amharic, 19 August 2022; Addis Standard, 18 August 2022). On 24 August, OLF-Shane shot and killed an unknown number of civilians in Burka town in Dawe woreda in Hari-Zone 5 after entering the town and conducting a home-to-home search.

On 18 August, a demonstration in the Somali region involved demonstrators throwing stones at security forces in Biki town in Siti zone while a Somali regional state presidential delegation visited IDPs from Gadamaitu in the town. The demonstrators condemned the regional government’s handling of inter-communal clashes between Afar and Somali militias in Gadamaitu and condemned “the silence of the government to intervene during the conflict” (Hiiraan Online, 18 August 2022; TIKVAH-Ethiopia, 18 August 2022). Security forces — assumed to be regional special forces — fired in the air and dispersed the demonstrators. Meanwhile, on 28 and 29 August, a Marehan clan militia attacked and clashed with a Maqabul clan militia over a land dispute in Laanta Qurac Shire village near Shilabo town in Korahe zone. At least 10 people were killed, and several others were injured.

Amid heightened tension following the government’s proposal to establish ‘cluster regions’ in SNNPR, the regional command declared a curfew, restricted the movement of motorbikes, and banned “any protests and public assemblies” in Welkite town and across the Guraghe zone (Addis Maleda, 18 August 2022; for more details on the proposed cluster regions in SNNPR see EPO Monthly: July 2022). In mid-August, regional police arrested several youths and zonal officials, including the head of the zone’s security sector, in Welkite town over their alleged opposition to a newly proposed cluster region, demanding self-governed regional state status, and organizing homestay and business closure protests. Later, residents of Wekite town protested the government’s action over the Gurageh zone decision and the government’s failure to respond to their request for self-administration, staying in their homes and boycotting work and business centers (Addis Maleda, 27 August 2022).

Lastly, the Joint Peace and Security Task Force arrested 31 individuals with various weapons in Bole Bulbula in Addis Ababa. The task force alleged that the individuals were conducting military training in religious facilities under the cover of religious activities and planning to carry out attacks on civilians.