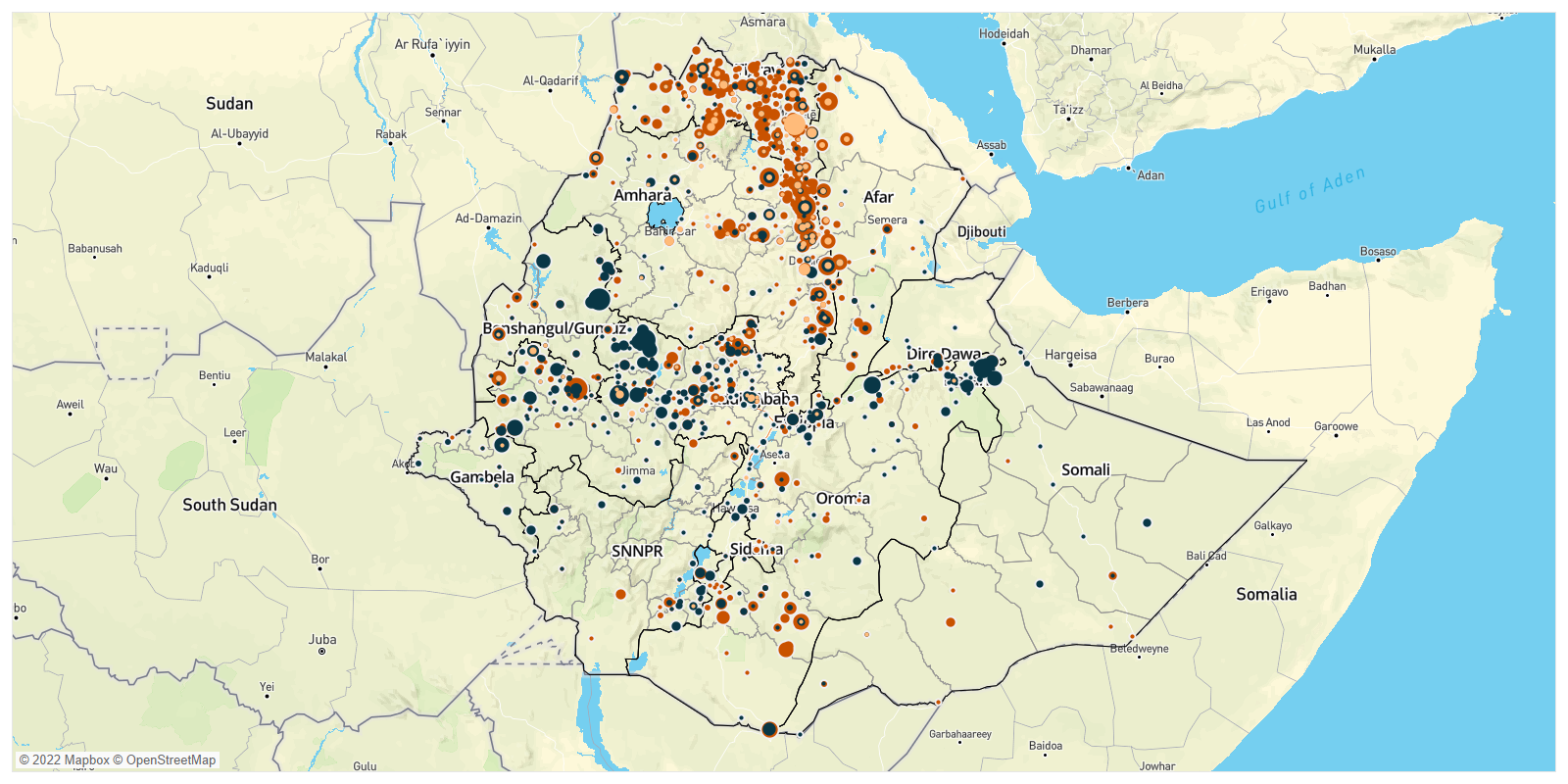 By the Numbers: Ethiopia, 3-9 December 20222Some events from this coverage period might be included in the data in subsequent weeks due to reporting delays. 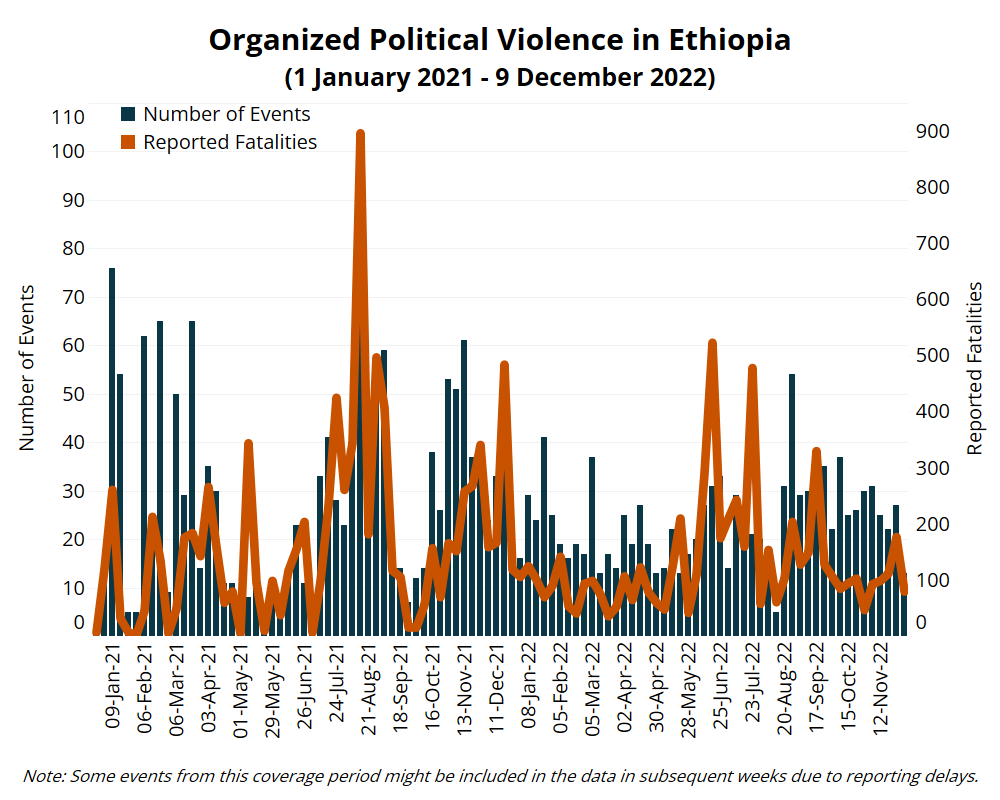 Last week, tensions in the country increased along with the continued and expanded violence in western Oromia, as well as unrest in connection with displaying the Oromia regional flag in schools in Addis Ababa. In the meantime, the humanitarian situation in Tigray region is slowly improving through improved access to the region and reduced violence (see map below). 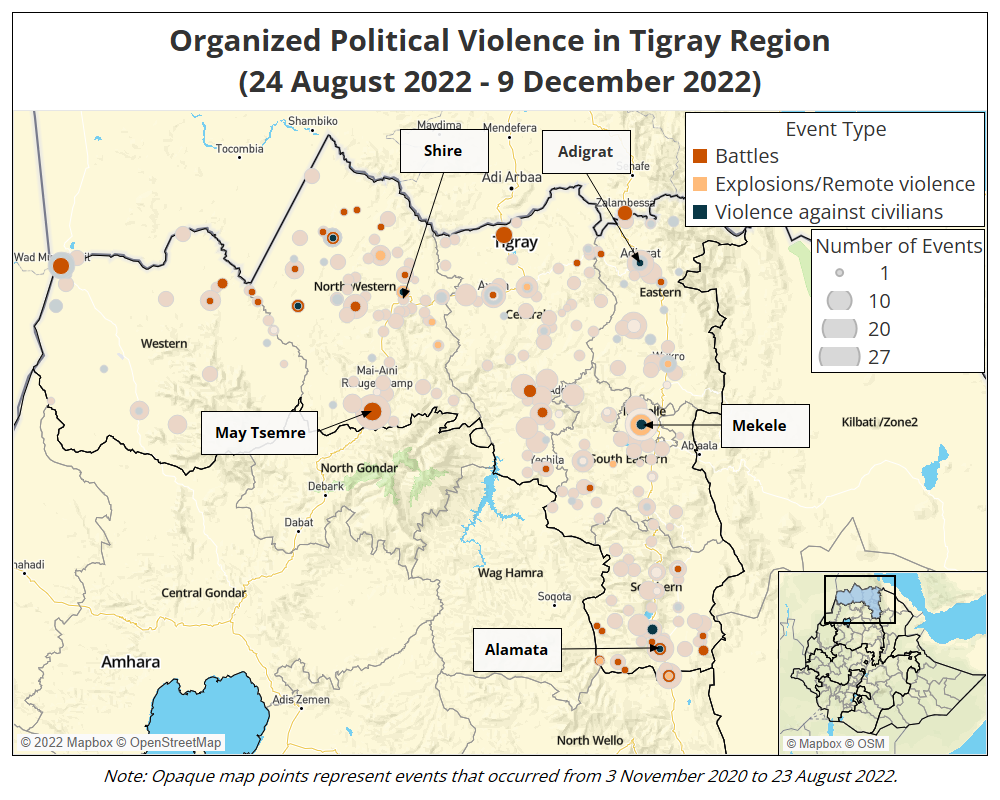 In Tigray region, electricity was restored in various cities, including the capital city, Mekele, and Wukiro, Adigrat, Shire, and Humera. These areas either did not receive power, or had limited access to electricity since June 2021 (DW Amharic, 10 December 2022). There is also an indication that telecommunication services might be restored “within few days” in Axum and Adwa towns while telecommunication in Shire resumed last week (VOA Amharic, 7 December 2022). Additionally, humanitarian aid is entering Tigray region through several corridors, including Gondar-Humera-May Tsemre, Kombolcha-Alamata-Mekele, and Semera-Mekele roads. Humanitarian flights from Addis Ababa to Mekele have also restarted, while humanitarian flights from Addis Ababa to Shire have just begun last week (UNOCHA, 6 December 2022). Previously humanitarian flights were only flying into Mekele. 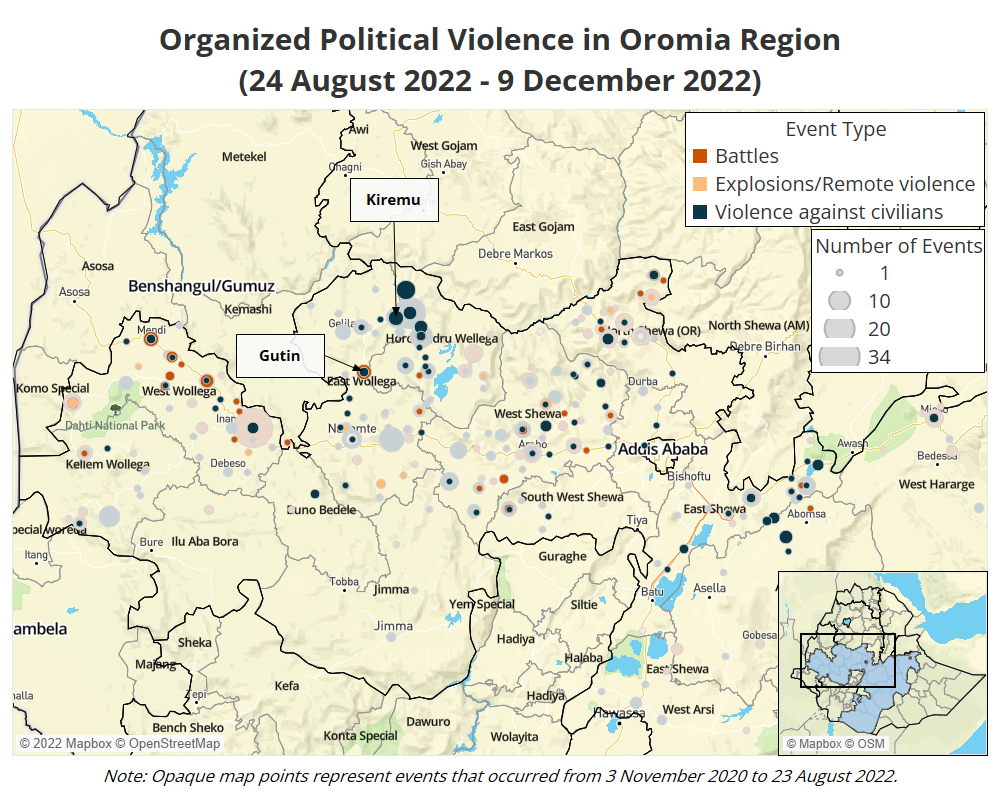 Fighting was reported in Gutin town in East Wollega zone, where  Amhara ethnic militias clashed with Oromia regional special forces on 3 and 4 December. At least 34 people were reportedly killed during the clashes. The number of fatalities is likely much higher. Local Amhara residents accused the members of Oromia regional special forces of initiating the attack on Amhara ethnic militias, which were formed with the government’s authorization to protect the local Amhara community. The Oromo residents of Gutin town and the local officials blame the Amhara ethnic militias, identifying them as Fano, for initiating the new round of violence in Gutin (VOA Amharic, 7 December 2022; BBC Amharic, 5 December 2022; DW Amharic, 6 December 2022). The federal government deployed the Ethiopian National Defense Force (ENDF) to the town on 5 December to calm the situation (DW Amharic, 6 December 2022). Nonetheless, clashes reportedly reignited between Oromo regional special forces and Amhara militias in the town on 8 December.

Moreover, Fano militias and the OLF-Shane attacked civilians in other parts of Oromia region last week. On 5 December, Amhara militiamen – assumed to be members of the Fano militia – shot and killed two civilians in villages around Welenchiti town in Boset woreda in East Shewa zone. The group also burned several homes and looted civilian properties. Two days later, four truck drivers were abducted by the OLF-Shane in Gebre Guracha area in North Shewa zone while traveling to Addis Ababa. The group burned three of the trucks, and asked for up to three million birr (around $56,200) as ransom to release the drivers.

Demonstrations were held in several regions in reaction to the violence in western Oromia. Last week, protests were held in high schools and universities throughout Oromia region, with students denouncing “the arbitrary killings of Oromo civilians by ethnic Amhara militias and government forces” (Oromia Media Network, 7 December 2022). All the protests were peaceful, although intervention by police in Adama town reportedly resulted in some injuries. Protests by ethnic Oromo students were likewise held in universities in Addis Ababa, Southern Nations, Nationalities and Peoples (SNNP), South West, Dire Dawa, and Gambela regions.

Similarly, a protest was held in Debre Markos town, Amhara region, denouncing “violence against ethnic Amhara civilians by the OLF Shane and inaction of the government” (Addis Maleda, 9 December 2022). Amharas residing in Dila town in SNNP region also held protests against the killings of Amhara civilians in Oromia region while at the same time, the Oromo residents protested the killings of Oromos in the region (VOA Amharic, 10 December 2022).

Reports of fighting in Oromia region have also raised tensions in the capital city, Addis Ababa, where several disputes in connection with the display of the Oromia regional flag and the singing of the regional anthem resulted in demonstrations and clashes. On 4 December, the parents of the students at Amha Desta secondary school in Woreda 1 in Gulele kifle ketema demonstrated against the hoisting of the Oromia regional flag in the school. Classes were canceled for several days due to the unrest (ESAT, 7 December 2022). Two days later, students of Kefitegna 12 school, around Ferensay Legasiyon in Gulele kifle ketema, pulled down the Oromia regional flag and threw stones at other students who attempted to stop them. The unrest spread to the surrounding neighborhoods. Some reports indicate that one student was killed and over 10 others, including a teacher, were wounded as a result of the clashes. Addis Ababa police refuted reports of the death of one student during the unrest (Addis Ababa Police, 9 December 2022). The unrest continued the next day at the Addis Ketema secondary school in Addis Ketema kifle ketema when teachers, students, and parents of the students clashed over the hoisting of the Oromia regional flag in the school. The Addis Ababa police blamed the violence on “extremists … who want to disturb the peace in the capital city,” and stated that it had arrested 97 people accused of instigating violence and organizing violent demonstrations in public schools in the capital (Addis Ababa Police, 8 December 2022).

Lastly, it was reported that members of the Benshangul People’s Liberation Movement entered Benshangul/Gumuz region through Sherkole woreda, located at the border of Ethiopia and Sudan, with the intent to disarm peacefully and to participate in the reintegration training. This followed the signing of a peace agreement between the group and the regional government in Khartoum, Sudan (Ethiopian Broadcasting Corporate, 11 December 2022). The regional government signed another peace agreement with the Gumuz People’s Democratic Movement in Asosa town on 19 October 2022 (see EPO Weekly: 15-21 October 2022 for more information). These two groups, along with the OLF-Shane, have been accused by the government of inciting violence in the region for the past few years.