By the Numbers: Ethiopia, 15-21 October 20222Some events from this coverage period might be included in the data in subsequent weeks due to reporting delays. 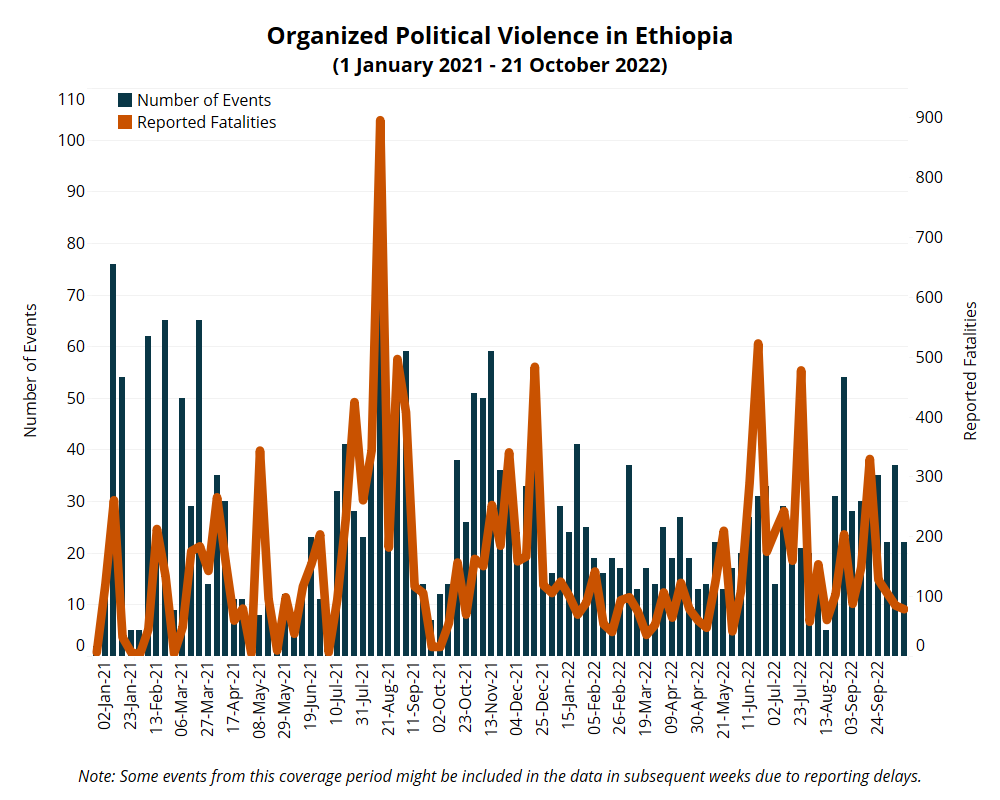 Battles continued in northern Ethiopia. Last week, armed clashes between government and Tigray People’s Liberation Front (TPLF) forces were reported in Shire in North Western Tigray zone, and Alamata, Korem, Bisober, Mehoni, and Guba mountain in Raya Bala in Southern Tigray zone in Tigray. Government forces regained control of Shire early in the week, followed by Alamata, Korem, Bisober, and Mehoni. The retaking of Shire town holds a strategic advantage for the Ethiopian federal government, as it gives troops access to the B30 highway which connects the major urban centers of Aksum and Adwa to the capital of the region, Mekele.

Representatives from both the Ethiopian government and TPLF arrived in South Africa this week to participate in the African Union (AU)-led peace talks which began on 25 October and is expected to last until 30 October 2022. Peace talks in South Africa were originally planned for 8 October 2022 but were delayed due to “logistical reasons” (Reuters, 7 October 2022). Very little is known about the current peace talks but it can be assumed that the two conflicting parties are discussing a ceasefire of sorts. It is also presumed that these parties will likely be discussing five other main issues which have prolonged the conflict – Western Tigray zone, the restoration of banking and communication services in Tigray, Tigray’s secession rights, the withdrawal of non-Tigrayan forces from Tigray, and the status of Tigrayan armed forces and the TPLF (for more details on these issues, see EPO Monthly: September 2022). Though there is evidence that the Eritrean Defence Forces (EDF) are involved in the northern Ethiopia conflict, Eritrea is not a participating member of the peace talks. Representatives of the UN, US, and the Intergovernmental Authority on Development (IGAD) are participating as observers in this round of peace talks (AU, 25 October 2022).

In Oromia region, armed clashes and airstrikes were reported. Last week, four armed clash events between government forces and the Oromo Liberation Front (OLF)-Shane were recorded in Gidara kebele in Fentale woreda in East Shewa zone, and Gojo town in Jeldu woreda and Kare Heto and Goro Mako kebeles in Meta Walkite woreda in West Shewa zone (see map below). Moreover, multiple airstrikes, which are rare in the region, were also reported in Oromia. On 19 October, the Ethiopian Air Force reportedly conducted drone strikes against OLF-Shane positions in Meta Walkite and Chobi woredas in West Shewa zone, and Nunu Kumba woreda in East Wollega zone. According to witnesses interviewed by BBC Amharic, one of the strikes targeted the graduation ceremony of OLF-Shane soldiers in Chobi woreda in West Shewa zone. At least 70 people, including members of the OLF-Shane and civilians attending the ceremony, were reported killed and 120 others injured (BBC Amharic, 25 October 2022). Additional airstrikes were conducted on Sunday 23 October 2022, which will be covered in next week’s weekly report. 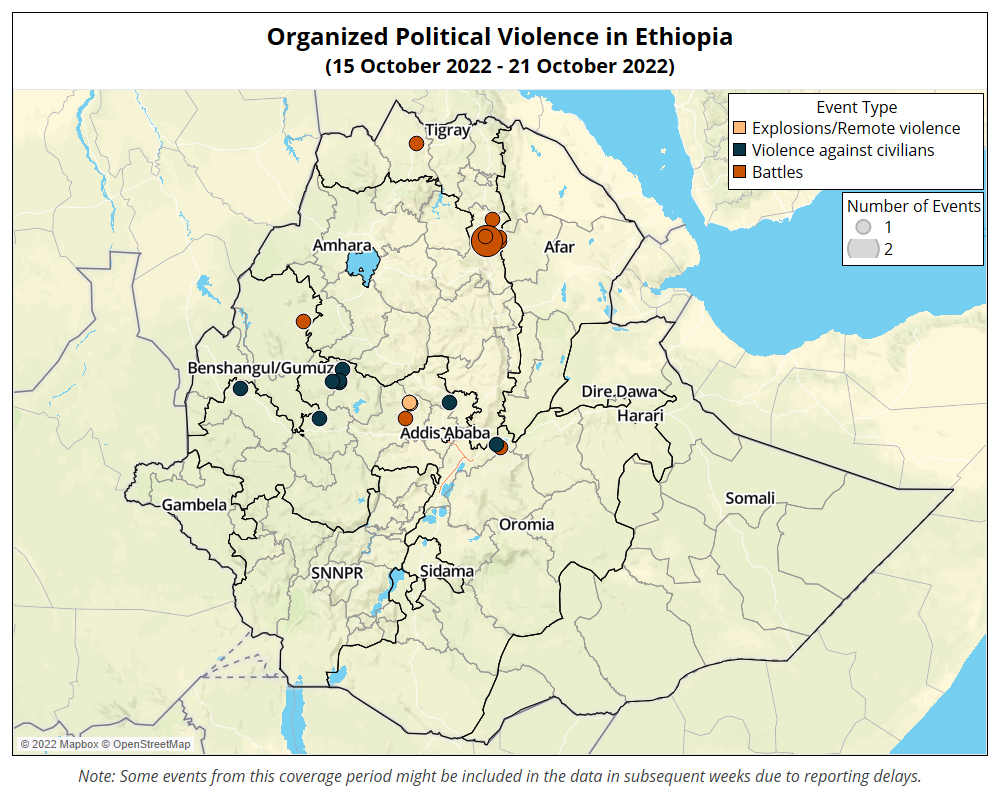 Furthermore, eight attack against civilians events were recorded in Oromia region. Three of these events were perpetrated by government forces in Fentale woreda in East Shewa zone, Mendi town in West Wollega zone, and Wuchale woreda in North Shewa zone, resulting in five reported fatalities overall. The victims in Mendi town were accused of being members of the OLF-Shane while the reasons behind the other two attacks are unknown. The remaining five reported events were conducted by Amhara ethnic militias resulting in a total of at least 43 reported fatalities. Four of these occurred in East Wollega zone and one attack took place in Horo Guduru Wollega zone.

Instability continued in Benshangul/Gumuz region. On 15 October, the Ethiopian National Defense Force (ENDF) and Gumuz ethnic militiamen clashed with a “Gumuz rebel group” in Ejenta, Welamsha Maya, and Eftawun kebeles in Mandura woreda in Metekel zone (EMS, 18 October 2022). These clashes followed the killing of Mandura woreda administrator and other civilians on 11 October (see EPO Weekly: 8-14 October 2022 for more details on this event).

Lastly, on 19 October, the Benshangul/Gumuz regional government signed a peace agreement with the Gumuz People’s Democratic Movement (GPDM) in Asosa town. The chairman of the GPDM party along with 300 others, including nine top leaders of the party, were released from the Gilgel Beles prison in March 2022. The releases had come shortly after the Kamashi zone administration officials and traditional elders sat for talks with the goal of bringing sustainable peace in the zone. Among other things, armed groups in the zone petitioned the government to release arrested individuals associated with their groups as part of a political solution to ongoing violence. Members of the GPDM also agreed to surrender and voice their demands peacefully. As a result, on 19 March, a traditional peace and reconciliation ceremony was held between the regional government and leaders of the GPDM – political and armed wings – in the zone (see EPO Weekly: 12-18 March 2022 for more details on the Kamashi traditional peace and reconciliation ceremony). However, tensions between the two parties increased at the beginning of June 2022 after some members of the GPDM reportedly refused to disarm following the traditional peace and reconciliation ceremony (see EPO Weekly: 28 May-3 June 2022 and EPO Weekly: 4-10 June 2022 for more information).