Splinter factions of the Oromo Liberation Front (OLF) are actively operating across Oromia, engaging in violent operations against civilians, local government representatives and federal troops. These splinter factions (OLF-Shane) militants — also known as the Oromo Liberation Army (OLA) — have been accused of using tactics of violence against civilians including massacres, indiscriminate and targeted killings, and intimidation. Although OLF-Shane operatives have been reported throughout many parts of Oromia, the insurgent group has most successfully challenged government rule in West and Kellem Wollega zones through the killing of civilians. Their victims are mostly members of the Amhara ethnic group and local administrators. Their activities consist of controlling territory, and conducting hit-and-run attacks against police and military forces  (Addis Standard, 20 March 2020). In return, the government jailed suspected OLF-Shane supporters and killed OLF-Shane militias (Fana Broadcasting, 11 January 2021, 22 March 2021, 20 March 2021). 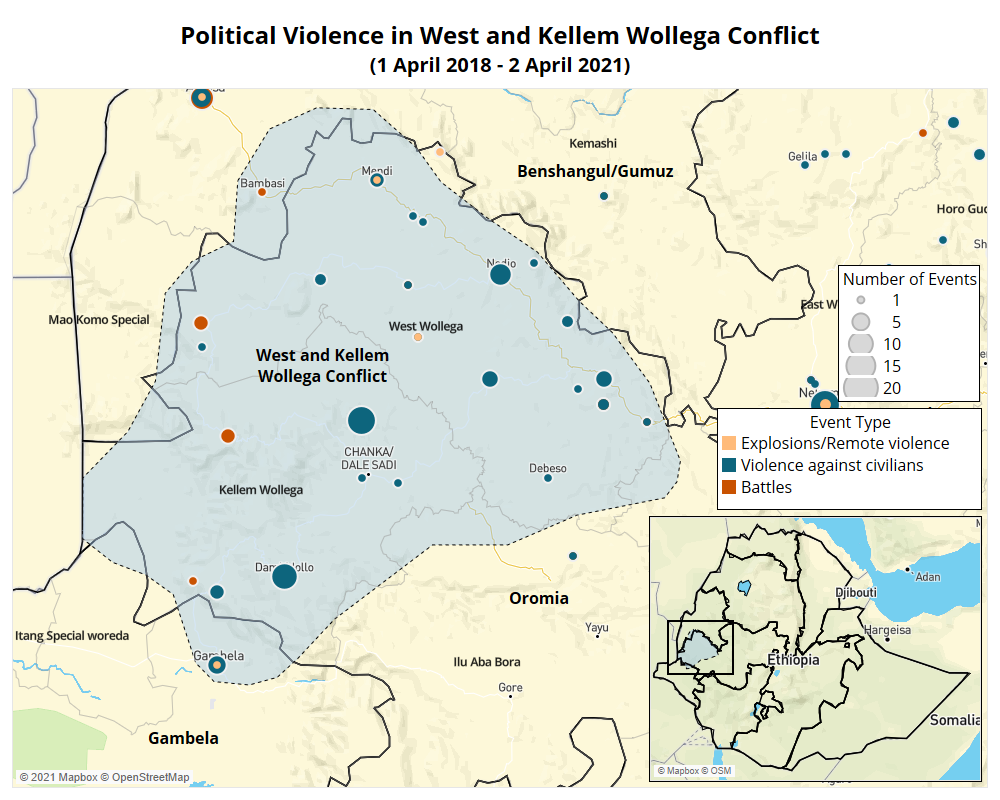 While information in this region is extremely difficult to access, reports of continued police violence, displacement, and insecurity suggest that the issue has continued far beyond the capacity of a local law-enforcement operation  (EBC, 27 January 2021, BBC News, 16 January 2021, Kello Media, 27 January 2021). Increased military efforts will be required to gain full control over the area and root out the OLF-Shane.

Yet, federal interventions into the West and Kellem Wollega include risks to the capacity of the state forces to adequately control the region, and an increase in violent behavior throughout Oromia. There are frequent examples of excessive force:  a recent investigation by the Ethiopian Human Rights Commission found that “two boys aged 11 and 12 and a girl, aged 14, had been detained since mid-December 2020 on suspicion of being members of OLF-Shane” (Ethiopian Human Rights Commission, 25 January 2021).

However, reports indicate that OLF-Shane militias are embedded into local populations, making high civilian casualties likely during operations. Federal forces have seriously exacerbated population discontent, and PM Abiy’s popularity among the Oromo is already low. Operations against the OLA are risky in that civilian casualties, destroyed housing, or non-professional behavior by troops could radicalize those who support opposition but do not currently side with the OLF-Shane movement.

In January 2021, government-associated media has been publishing daily reports of anti-OLF protests taking place in West Wollega, with participants denouncing Shane for their tendencies of violence against Oromos and non-Oromos alike. This coverage represents an effort to re-frame the key political issues in the area and turn public opinion against the militants. Months of insecurity and killing of civilians by both the government and OLF-Shane affiliates has resulted in a fatigued population. Repositioning the key political issue in West Wollega from issues related to ethnic federalism to a reduction of violence appears to be a key government strategy in the run-up to local elections (EBC, 15 January 2021).

Very recently,  ethnic Amhara in the region continue to be victims of a string of attacks that have resulted in high numbers of civilian fatalities (Addis Standard, 12 March 2021, EBC 31 March 2021). The government blames the Shane militants, who refute the claim insisting that they have never taken part in mass killings and instead blame a “government-affiliated militia” (Al Jazeera, 29 March 2021).