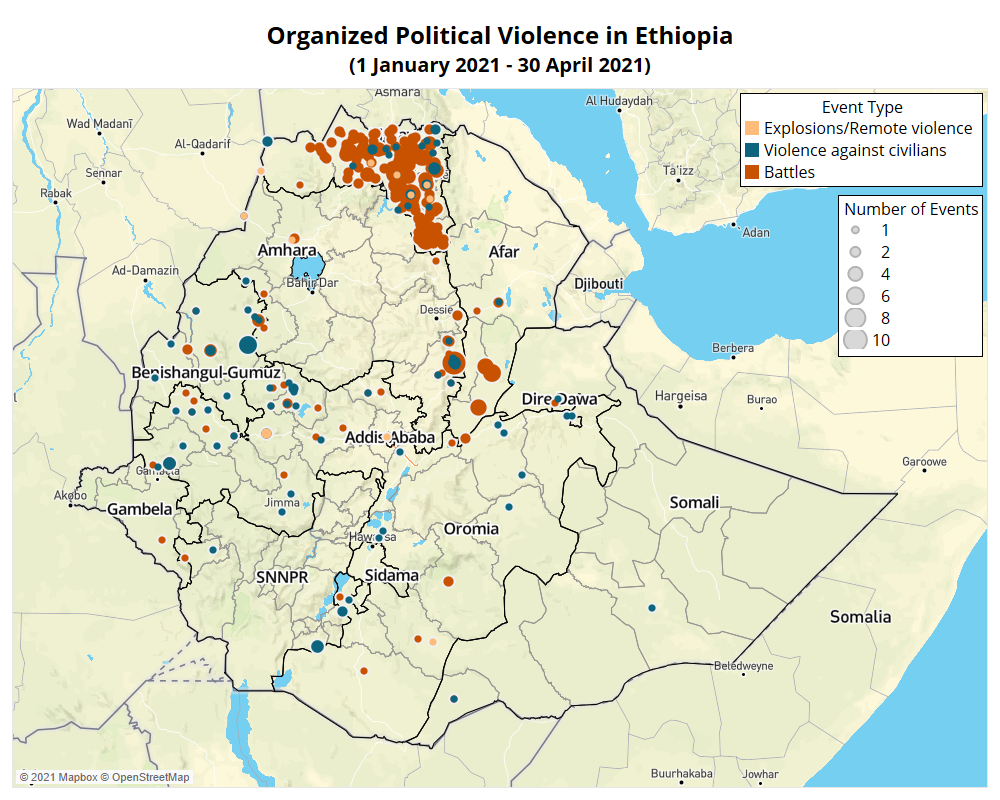 Last week, there were many high-fatality incidents in Ethiopia, highlighting a continuing trend of instability as government forces struggle to combat a number of armed insurgent movements operating in remote locations throughout the country. The government accuses the Oromo Liberation Front (OLF)-Shane militants of perpetrating attacks on civilians in Jimma Zone, Kuyu-Dagem Woreda in North Shewa Zone in Oromia, and in Dembi Dolo town. These attacks led to at least 40 fatalities. On 25 April 2021, Oromia region security forces were accused of shooting and killing a university teacher in a raid on his house in Dembi Dolo. Meanwhile, Tigray People’s Liberation Front (TPLF)-associated forces reportedly attacked areas in Wag Hamra Zone (Amhara regional state), killing as many as 11 people.

In Tigray, continued instability temporarily closed the main route between Adigrat and Axum, forcing humanitarian workers to reroute supplies through Gondar (UNOCHA 3 May 2021).

Election-related protests have continued in the Somali region, with demonstrators denouncing a decision by the National Election Board of Ethiopia (NEBE) to remove polling stations in contested areas along the Afar and Somali regional state borders.

Due to the current insecurity, the Oromo Federalist Congress (OFC), Oromo Liberation Front (OLF), and the Oromo Liberation Army (OLA) which is most of the time identified as OLF-Shane by the government called for the cancellation of the upcoming election and advocated instead for a national dialogue conference. OLA proposed establishing an inclusive transitional government (Oromo Federalist Congress, 29 April 2021; Oromo Liberation Front, 28 April 2021; Addis Standard, 29 April 2021). The Ethiopian Council of Ministers recently passed a proposal designating the OLF-Shane and TPLF as terror organizations (Office of the Prime Minister, 1 May 2021). 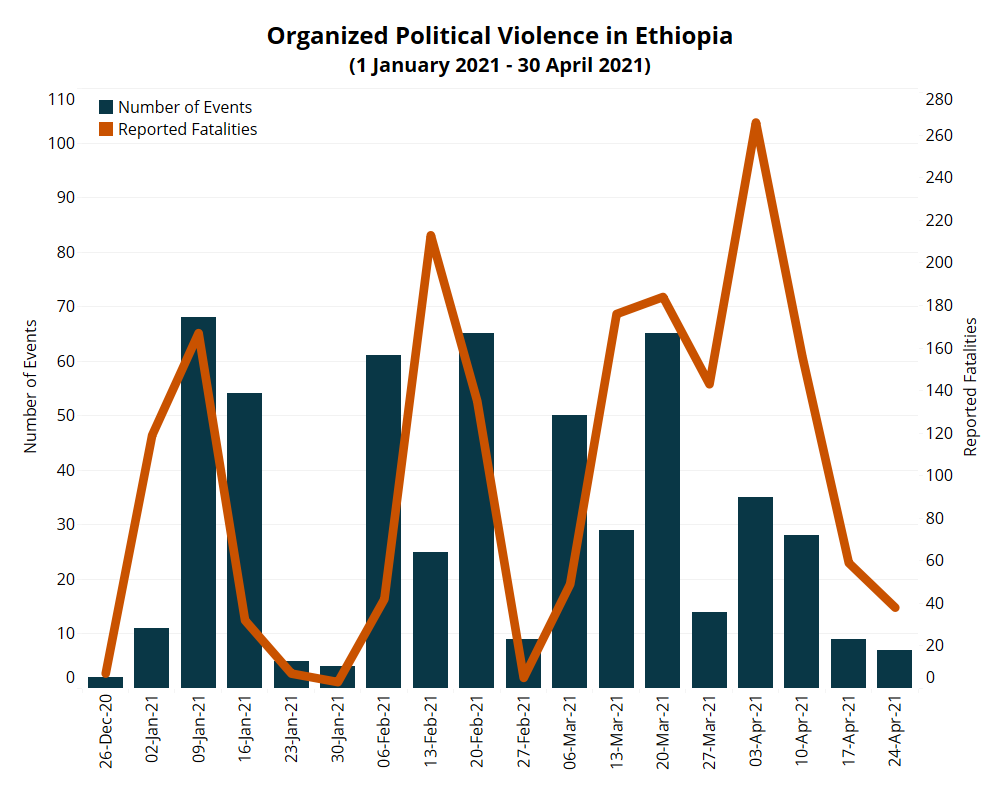 An active insurgency continues in the Tigray region, temporarily restricting humanitarian access along the main route between Adigrat and Axum this week (UNOCHA 3 May 2021). TPLF forces also attacked areas of Wag Hamra zone in Amhara region, killing 11 people, including civilians (VOA Amharic, 27 April 2021; for more on this event, see the section below).

Although the Ethiopian government stated that both Ethiopia and Eritrea are currently discussing “the military techniques of Eritrean troops withdrawal,” recently obtained documents reveal that  Eritrean soldiers are blocking and looting food aid in Tigray region (BBC Amharic, 27 April 2021; France24, 27 April 2021). The Eritrean government has denied the allegations (VOA Tigrigna, 28 April 2021). The United Nations has said “additional capacity, funds, as well as unimpeded and safe access” are required to improve the humanitarian response (UN News, 29 April 2021).

Last week, a number of high-fatality incidents were recorded in both Amhara and Oromia regions due to several attacks by different armed groups (see figure below). In Oromia region, the attacks were perpetrated by suspected OLF-Shane militias who mainly targeted ethnic Amharas. Meanwhile, in Amhara regional state, a flareup of clashes between ethnic militias from the Qemant movement resulted in a number of fatalities, prompting intervention from the federal government. 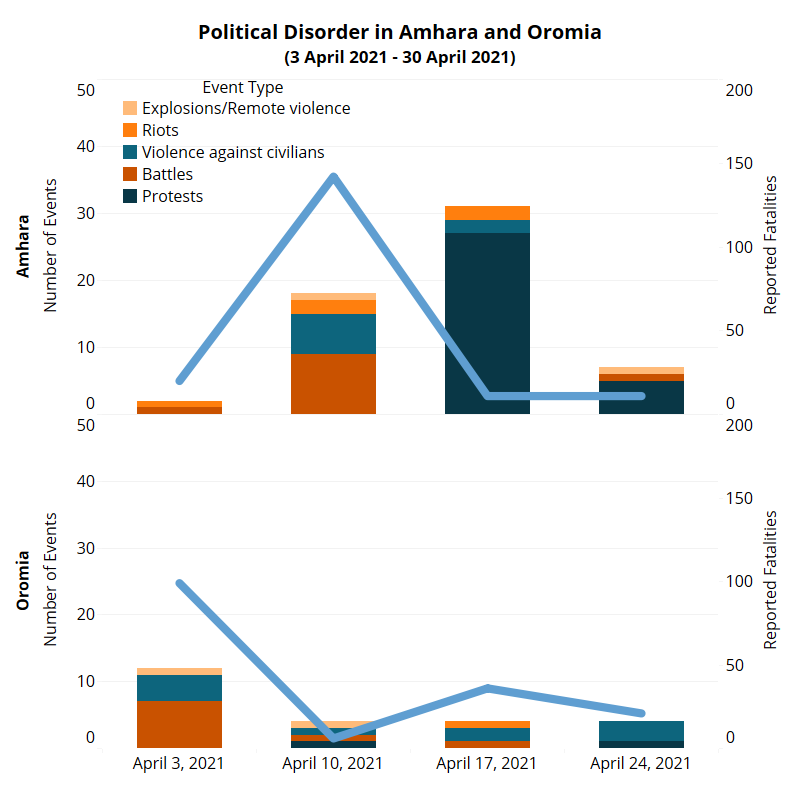 Furthermore, on 30 April 2021, Sudanese armed forces reportedly fired heavy weapons into a farm located 70km from the Ethiopian side of the border in the area of Mendoka, west Gondar (DW Amharic, 30 April 2021). Due to counterattacks by the Ethiopian Defense Force, local militias, and anti-insurgency forces, the Sudan forces retreated from the area.

In Oromia region, at least 40 fatalities have been reported; 20 from last week and 20 from the week prior which were reported on 25 April 2021. On 23 April 2021, OLF-Shane militants attacked Amhara ethnic civilians in Ket’cho Kirkira and Gale Kebeles of Limu Kosa Woreda (Jimma Zone), prompting the deployment of federal and regional security forces. According to local officials, at least 20 civilians were killed in the attack, although some sources put the fatality toll at 29 persons (Ethiopian Human Rights Commission, 25 April 2021; DW Amharic, 28 April 2021; Reuters, 30 April 2021). In addition, on 28 April 2021, unidentified gunmen attacked a convoy of trucks (locally known as Isuzus) traveling from Addis Ababa to Gojjam around the Kuyu/Degem Woreda border area near the town of Gebre Guracha and killed five people. Two days later, suspected members of OLF-Shane shot and killed 15 people and injured an unidentified number of people after pulling them off a bus in Amuru Kebele (Horo Gudru Wollega Zone) (Ethiopian Broadcasting Corporation, 30 April 2021; Amhara Media Corporation, 30 April 2021).

A witness stated that the militants selected victims based on their inability to speak Afan Oromo (BBC Amharic, 1 May 2021); yet, reports indicate that those killed were from both the Oromo and Amhara ethnic groups. Meanwhile, on 30 April 2021, protesters gathered in Limu Gandoti Arekumbe Woreda in East Wollega Zone to denounce the loss of life and property as a result of attacks on ethnic Amhara communities in the area (Ethiopian Broadcasting Corporation, 30 April 2021).

As the general election approaches, Ethiopian courts have been adjudicating different election-related disputes, often repealing decisions made by NEBE. Last week, the Federal Supreme Court repealed NEBE’s decision to deregister the Oromo Gada Liberation Party – Gada Bilisuma and the Oromo Democratic Alliance (ODA) (BBC Amharic, 28 April 2021; Oromo Democratic Alliance, 29 April 2021). However, since candidate registration has ended and printing of the ballots is underway, both parties are not on the ballot. Consequently, the Gada Bilisuma party requested the election be extended by six months in order to prepare and participate in the election fairly. Similarly, the Federal Supreme Court rejected the decision of NEBE to prohibit Hararis living outside the Harari Regional State to vote for the regional National Assembly members (Ethiopian Reporter,  28 April 2021; for more detail, see EPO Weekly: 3-9 April 2021).

Moreover, some election officers have stopped working due to a dispute over payment in South Wello, Amhara region. This has affected the voter registration process in the area (VOA Amharic, 28 April 2021). At the same time, the Dire Dawa administration reported a couple of attacks on some election officers in the city and threats against voters not to register to vote in the election (DW Amharic, 28 April 2021). The administration did not clarify who attacked the election officers and threatened the voters in Dire Dawa. Reports of violence surrounding registration have been a common theme in some areas of Oromia region. Additional protests continued in Somali regional state in reaction to a decision by NEBE to remove polling stations in the contested territories along the Afar and Somali regional state borders (Voss TV, 28 April 2021a; 28 April 2021b).