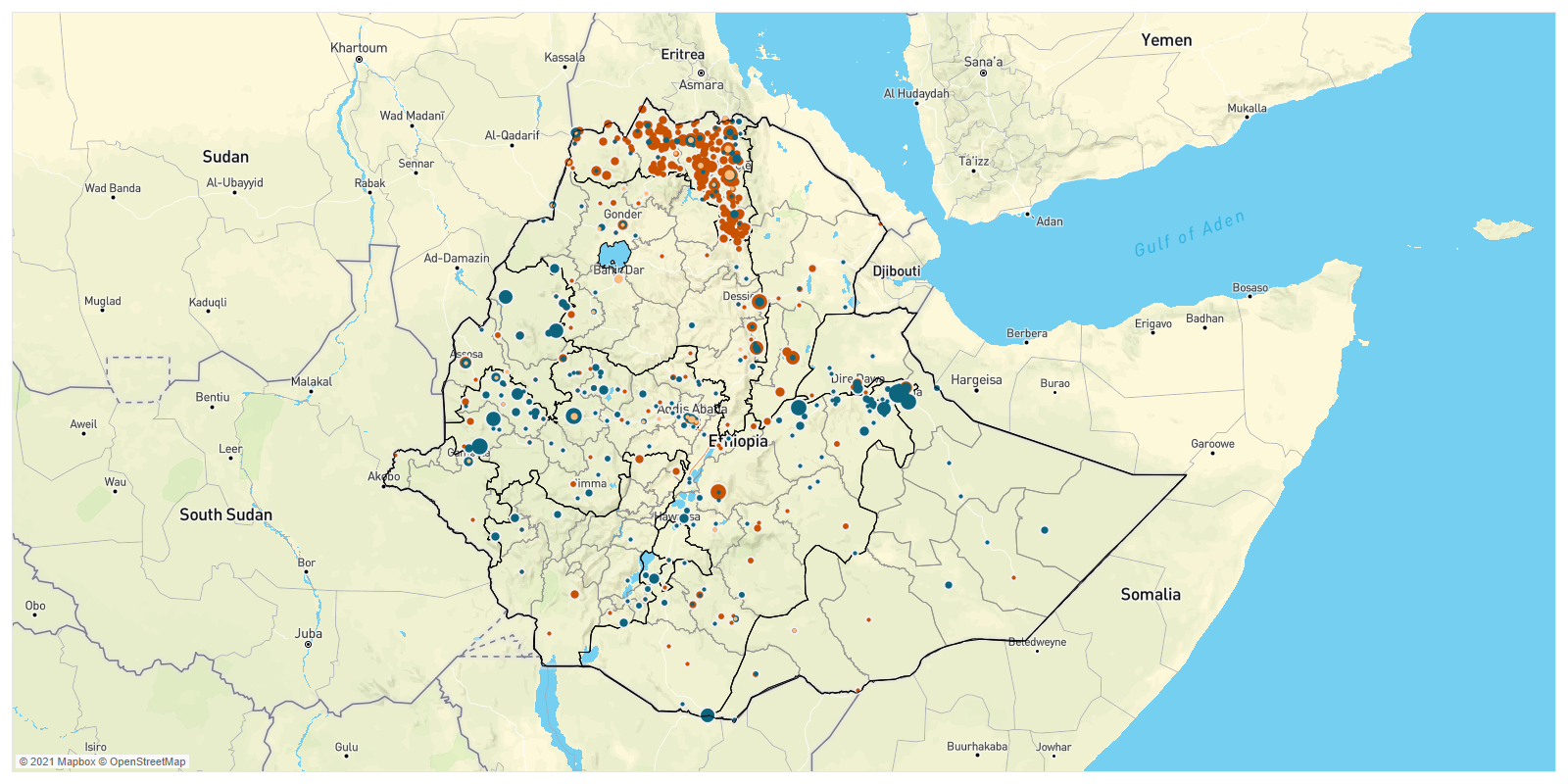 Last week, there were fewer organized violence events and fatalities compared to the previous weeks (see figure below). The week started with protests against the intervention of foreign countries in the internal affairs of Ethiopia. On 30 May 2021, protesters gathered under the slogan of “our voice for our independence and sovereignty” to denounce US sanctions on Ethiopia, calling for the US to reconsider its recent imposition of visa restrictions against Ethiopian officials (Fana Broadcasting, 30 May 2021). More than 50,000 protesters reportedly took part in this demonstration in Addis Ababa (ESAT, 30 May 2021). On the same day, similar protests were held in the cities of Asosa, Dire Dawa, Gambela, Harar, Hosana, Silte, and Welaita Sodo (Ethiopian Broadcasting Corporation, 30 May 2021a, Ethiopian Broadcasting Corporation, 30 May 2021b). A second protest was held in Addis Ababa in front of the US embassy on 1 June 2021. 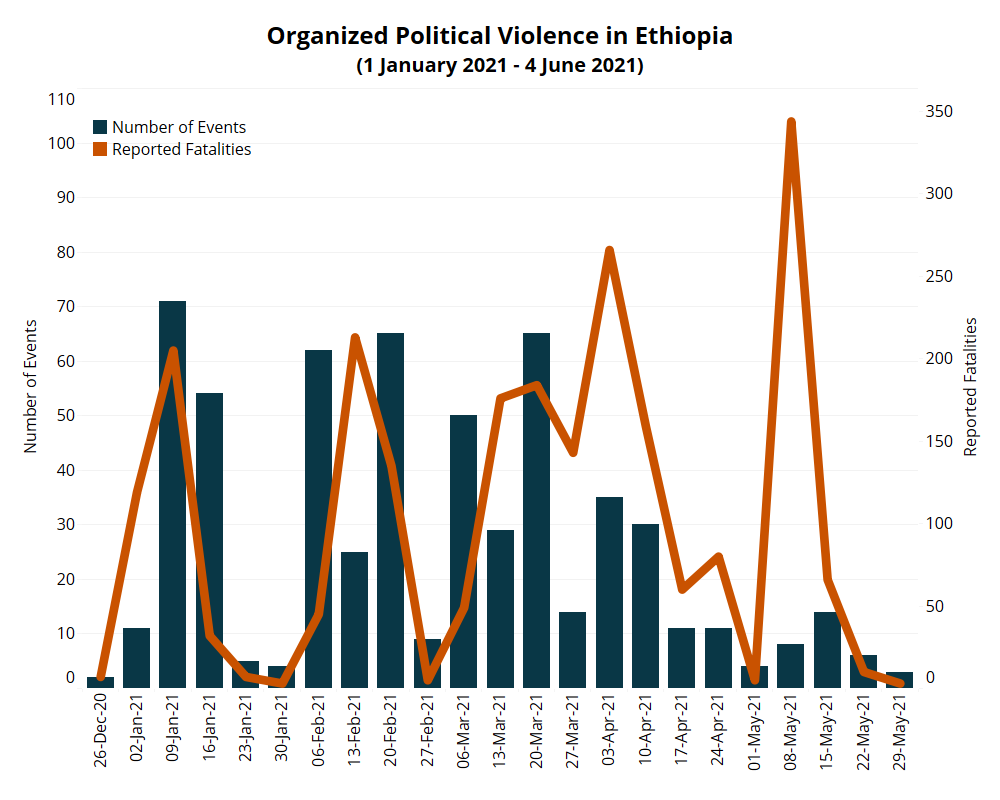 On 2 June 2021, the Afar regional government stated that it had taken over the administration of Sawne kebele, which had been administered by authorities from the Tigray region over the last 30 years (Wazema Radio, 2 June 2021). Similarly, since November 2020, the Amhara regional government has been administering part of west Tigray. It is not clear how the federal government will resolve these types of administrative contests that have emerged during the conflict with the Tigrayan People’s Liberation Front (TPLF).

Last week, the government released a number of reports on the ongoing conflict in the Tigray region. These reports focused on addressing what the government calls “baseless and politically motivated” reports (Office of the Prime Minister – Ethiopia, 3 June 2021). Ambassadors and international organizations who are based in Addis Ababa were briefed on government efforts in the region by the deputy prime minister of Ethiopia and other higher officials (Fana Broadcasting Corporate, 3 June 2021).

In the reports, the Ethiopian federal government admitted that active conflict with TPLF forces is ongoing in at least two locations despite efforts to wrap up operations in the region (Office of the Prime Minister – Ethiopia, 3 June 2021). As more territory is gained by government troops, TPLF forces have turned to guerilla-type warfare, targeting provisional administrators and convoys. This has drastically complicated efforts to maintain basic services and provide a working government even in locations squarely under the control of Ethiopian and Eritrean forces (VOA Amharic, 1 June 2021).

Government records indicate that from November 2020 till mid-May 2021, militants linked to the TPLF have assassinated 22 members of the Tigray provisional administration, injured 4 other members, and kidnapped 20 individuals linked to the provisional government in the region (Ethiopia State of Emergency Fact Check, 26 May 2021). Last week, an additional 2 members of the provisional government were killed by members of TPLF. On 28 May 2021, TPLF forces attacked a government building in Adigrat in the Eastern Tigray zone, killing the provisional mayor of the city, along with an unidentified associate. A member of an INGO was also killed in the crossfire (UNOCHA, 3 June 2021). A few days later, on 3 June 2021, TPLF members killed a member of the Tigray provisional administration in Raya Azebo woreda (ESAT, 5 June 2021).

Despite an official end to the six-month state of emergency in the Tigray region, the Attorney General stated that “the federal intervention mandated by the House of Federation is still in force” (Office of the Prime Minister – Ethiopia, 3 June 2021). This means the federal government can legally continue the administration of the Tigray region. This decision has been met with resistance from the provisional government which wishes to see a return of power to regional authorities (VOA Amharic, 1 June 2021). In addition, the government indicated that the Eritrean forces have commenced withdrawing from the region (Office of the Prime Minister – Ethiopia, 3 June 2021).

In response to heavy pressure to investigate crimes perpetrated by armed forces in the region, the Attorney General presented a report detailing the prosecution of 28 soldiers accused of killing civilians “without military necessity” and 25 soldiers accused of sexual abuse and rape (Office of the Prime Minister – Ethiopia, 3 June 2021). Other investigations are also underway. Furthermore, 23 other people who are believed to be involved in killing civilians in the Maikadra area are on trial (Office of the Prime Minister – Ethiopia, 3 June 2021). Claims of human rights violations in the Tigray region are being investigated by four different groups: the military court, the Tigray Police and Justice Bureau, the federal police with assigned investigators, and the Ethiopian Human Rights Commission (EHRC) with the UN Human Rights Commission (UNHRC).

Despite these improvements, the government also admitted that it was facing major security and financial challenges as a result of the conflict. TPLF associated forces have repeatedly attacked convoys, slowing the movement of supplies. The sheer number of those in need has overwhelmed financial resources. Government sources also point toward “distortion of data” — allegedly by international news outlets — as an obstacle to addressing issues in the region (Office of the Prime Minister – Ethiopia, 3 June 2021).

With only two weeks left until election day, intimidation of opposition parties’ supporters is being reported. Farmers who support opposition parties in Yilam and Densa woreda in the West Gojam zone stated that the local administrators restricted their access to fertilizer essential for the current season of sowing (DW Amharic, 3 June 2021). Moreover, the Ethiopian Citizens for Social Justice (EZEMA) could not campaign in Chagni town in the Amhara region and Sere election constituency in the Oromia region due to restrictions imposed by the local administration (EZEMA, 29 May 2021; EZEMA 7 June 2021). EZEMA has faced intimidation and violence in the Oromia and Amhara regions, including the killing of two of their candidates in Bishoftu (Oromia region) and in Ataye town (Amhara region).