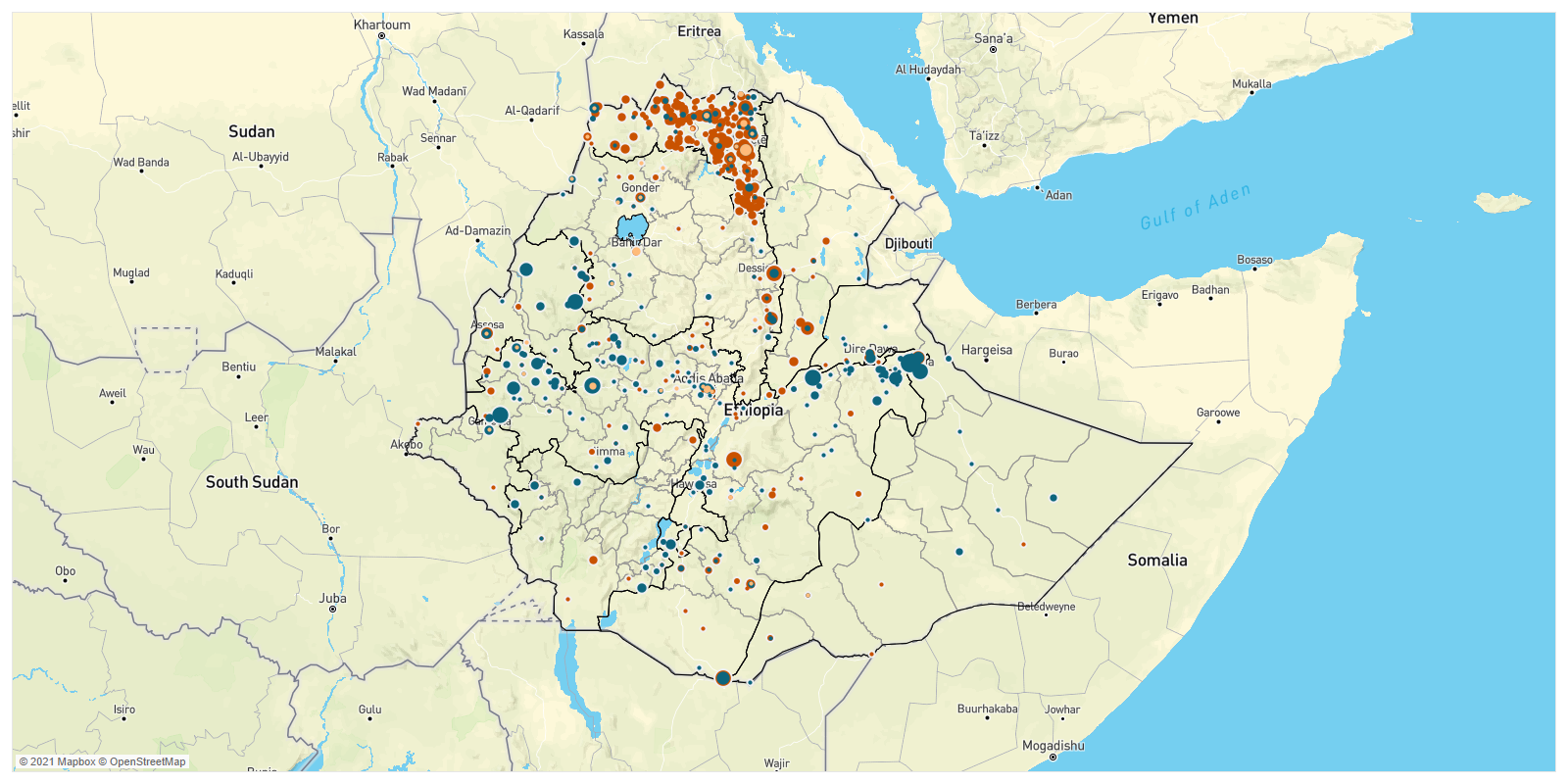 By the Numbers: Ethiopia, 26 June 2021-2 July 20212Some events from this coverage period might be included in the data in subsequent weeks due to reporting delays. In particular, information about the current situation in Tigray with regards to civilian targeting is likely to come in slowly over the next couple of weeks. 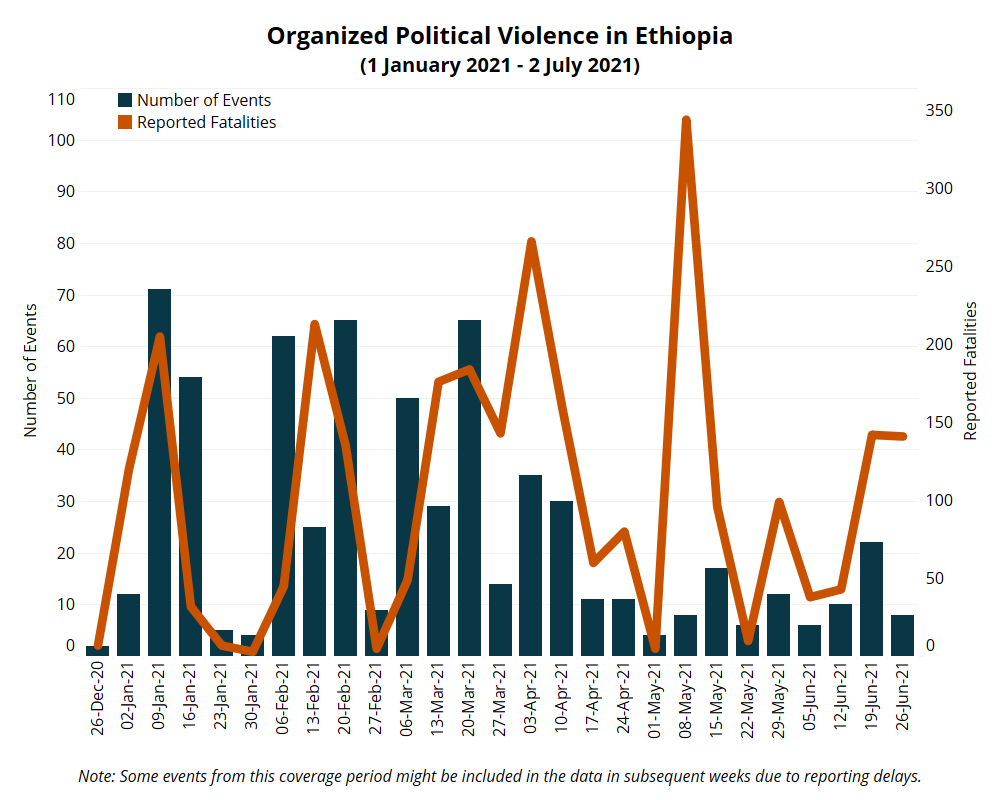 Following a heavy offensive last week by the Tigray People’s Liberation Front (TPLF) into central Tigray, on 28 June 2021, Ethiopian federal forces and their Eritrean allies withdrew from the Tigray region as TPLF forces swept forward to take control of the regional capital, Mekele. As TPLF forces advanced, the federal government announced a unilateral ceasefire that will last until the “end of the farming season” which usually falls around November (Amhara Media Corporation, 28 June 2021). The decision taken by the Ethiopian government to withdraw troops from the region was influenced by several factors discussed in detail in the weekly focus below.

Despite the unilateral ceasefire, fighting was prolonged in areas north of Shire town, where local reports indicate that Eritrean troops and TPLF forces traded gunfire in Adi Diaro town. TPLF forces have not yet entered western Tigray which is currently controlled by police and militia forces from the neighboring Amhara region.

The exact amount of damage inflicted on the Ethiopian and Eritrean armies is difficult to estimate as military troops were evacuated quickly in the face of the TPLF advance. Further, hundreds of soldiers from both armies are thought to have been killed during the latest TPLF offensive prior to the ceasefire, and as many as 7,000 troops of the Ethiopian army — the Ethiopian National Defense Force (ENDF) — were reported by international journalists to have been taken captive (NYT, 2 July 2021). Government sources have stated that while some members of the ENDF “surrendered instead of killing civilians,” the number of ENDF members held captive by TPLF is exaggerated (Ethiopian Broadcasting Corporation, 3 July 2021).

Fighting will likely reignite in the coming weeks as TPLF forces are likely to attempt to dislodge Amhara regional forces from areas of the Western Tigray zone across the Tekeze River. At the beginning of July, the Tekeze river bridge was damaged and is impassable, complicating supply routes for humanitarian convoys. Both the TPLF and the federal government blame each other for damaging the bridge (Ethiopian Foreign Minister briefing, 2 July 2021; Reuters, 2 July 2021).

Meanwhile, in the Oromia region, Oromo Liberation Front (OLF)-Shane militants attacked and killed three civilians returning from the market in an area known as Eri Bekentu in Horo kebele in Abe Dongoro woreda in Horo Guduru Wollega zone. Six more woreda-level militiamen who came to collect the civilians’ bodies were also killed by OLF-Shane (ESAT, 28 June 2021). The OLF-Shane militants have been gaining strength in parts of western Oromia over the past year (see EPO’s West and Kellem Wollega conflict profile page).

During the last week, the Ranchi internally displaced people (IDP) camp, located in Chagni town in the Awi zone in the Amhara region, was closed after the Ethiopian government relocated 50,553 IDPs to several locations in the Metekel zone, Benishangul/Gumuz region (DW Amharic, 30 June 2021). Civilians living in the camp had been displaced from their residences in the Metekel zone during violent attacks throughout 2020 and the first half of 2021. Most of the IDPs are ethnic Amhara and are thus the minority in the Benishangul/Gumuz region. The government began relocating these IDPs to Dangur, Dibate, Mandura, Bulen, and Wonbera woredas in the Metekel zone two weeks ago (see EPO Weekly: 19-25 June 2021). The relocation process has been hampered by logistical and security issues, and relocated IDPs have complained of food shortages and unresolved security issues (DW Amharic, 25 June 2021).

Government officials are attempting to address unresolved issues in the eastern areas of the Benishangul/Gumuz region through dialogue with local populations. Last week, a traditional reconciliation meeting was held in Pohtomanjari kebele in Mandura woreda (Amhara Media Corporation, 30 June 2021). In mid-May, a peace agreement was signed between representatives from the Benishangul/Gumuz regional government and members of an armed group who are undergoing re-integration training in the region (see EPO Weekly: 8-21 May 2021). Since 2018, many fatalities in the Metekel zone have been linked to attacks mounted by unspecified ethnic militias on ethnic Amhara civilians (see EPO’s Metekel Conflict page).

Weekly Focus: The Federal Government’s Decision of Unilateral Ceasefire and the Conflict in Tigray

The decision by the federal government to announce a unilateral ceasefire on 28 June 2021 in Ethiopia’s Tigray region took the national and international community by surprise as it marked a sharp reversal of policy from previous months (AP, 28 June 2021; Reuters, 25 March 2021). As Ethiopian and Eritrean forces withdrew from the Tigray region, TPLF fighters swept into the regional capital in celebration (BBC, 29 June 2021).

Violent conflict between the federal government and the TPLF had erupted on 4 November 2020. It quickly spiraled into a quagmire for federal troops as TPLF forces regrouped in the remote mountainous villages of the region (see EPO’s Tigray Conflict page). On the ground, federal forces faced regional forces and local militias with a distinct home-team advantage. They took heavy losses while Ethiopia’s top officials were crippled by diplomatic pressure — including sanctions — over the involvement of Eritrean troops and civilian targeting (NYT, 24 May 2021; EBC 3 July 2021). Frustrated and facing an impending humanitarian and military disaster, the government decided to withdraw.

Officially, the Ethiopian government stated that it was withdrawing because it had achieved its goals in the Tigray region by recovering military assets and capturing or killing TPLF high-ranking individuals. It also reasoned that its withdrawal was to allow Tigray farmers a peaceful season for planting (Press Briefing by Ministry of Foreign Affairs, 30 June 2021). State media also stated that troops in Tigray are to be shifted towards its western border as the rainy season prompts the filling of the country’s hydro-electric Grand Ethiopian Renaissance Dam amid a diplomatic standoff with Egypt and Sudan (Press Briefing by Ministry of Foreign Affairs, 30 June 2021; France 24, 6 July 2021).

Yet, Ethiopia’s Tigray crisis is far from over. Over the past eight months, amid an active TPLF insurgency, governing the Tigray region via the Ethiopian and Eritrean militaries has proved to be an impossibility. After losing control of the region militarily in the early weeks of the conflict, the TPLF set out to make governing the region an unattainable task by assassinating federally-appointed interim officials and hampering efforts at rebuilding damaged infrastructure (Ethiopia SOE Fact Check, 26 May 2021; Office of the Prime Minister, 5 July 2021). Unable to fully maintain control over the region during the mounting insurgency, the Ethiopian government increasingly relied on forces from neighboring Eritrea, who have targeted civilians in populations under their control (AP, 18 February 2021).

Throughout the conflict, Tigray’s population has suffered lawlessness in the form of massacres, sexual violence, communication blackouts, water cuts, and the looting of critical farming supplies by troops from neighboring Eritrea. Strong evidence obtained by journalists indicates that starvation in rural areas of the region has already begun (AP, 30 June 2021).

The impasse between the federal authorities and TPLF makes restoring any sense of normalcy to the region extremely complicated. On 6 May 2021, the House of Peoples’ Representatives unanimously approved a recommendation by the Council of Ministers to designate the TPLF as a ‘terrorist’ organization (House of Peoples Representatives of FDRE, 6 May 2021). TPLF forces, for their part, killed 38 individuals associated with the federally-backed Tigray interim government as they took control of the city of Mekele last week (Ethiopian News Agency, 3 July 2021). This follows reports that many other interim government officials were assassinated by the TPLF throughout the conflict (Ethiopia SOE Fact Check, 26 May 2021; EBC, 27 June 2021).

Governance functions in the region have already ground to a halt. Since 29 June 2021, telecommunications, banking services, and electricity have been cut, prompting panic as cash shortages hit an already stressed population (DW Amharic, 2 July 2021). The federal government has stated it can no longer be responsible for infrastructure functions in the city (DW Amharic, 3 July 2021). The TPLF has little capacity to return such functions themselves as supply routes for fuel are cut by Eritrea to the north, Amhara regional forces to the west, and ENDF to the east and south.

Ethiopia’s Tigray region has thus manifested into a full-blown governance capacity crisis. The entity with the capacity to provide governance functions to the region (the federal government) has been unable to do so due to the TPLF insurgency. The TPLF, which now controls most of the region, has little capacity to provide the goods and services the population desperately needs. Additionally, TPLF’s listed conditions for a mutual ceasefire include both territorial independence and federal funds, a direct contradiction to the goals of the central government (Al Jazeera, 4 July 2021).

Fighting is thus unlikely to end and the unilateral ceasefire is unlikely to establish any sort of lasting peace. The TPLF called the ceasefire a “joke” and promised to pursue and attack the Eritrean forces, the ENDF, and Amhara regional forces (Reuters, 30 June 2021). Parading 7,000 allegedly captured Ethiopian troops through Mekele likewise shows the TPLF’s disregard for the unilateral ceasefire.

As noted, on 29 June 2021, one day after the announcement of the unilateral ceasefire and withdrawal of ENDF from the Tigray region, sporadic clashes were reported between Ethiopian and Eritrean soldiers against TPLF forces in Adi Dairo in the Northwestern Tigray zone (see map below). As well, on 1 July 2021, two Tekeze river bridges — the main access points for humanitarian assistance in the Tigray region — were destroyed with the TPLF and federal government trading blame (Ethiopian Foreign Minister Briefing, 2 July 2021; Reuters, 2 July 2021). The Ethiopian national forces are currently trying to build a temporary mobile bridge over the Tekeze river and provide security around the bridge in order to facilitate humanitarian access (Ethiopian Broadcasting Corporation, 2 July 2021). On 3 July 2021, TPLF forces reportedly lost an armed clash with Eritrean soldiers at the border of the two countries in an area called Rama (Eritrean Press, 3 July 2021). 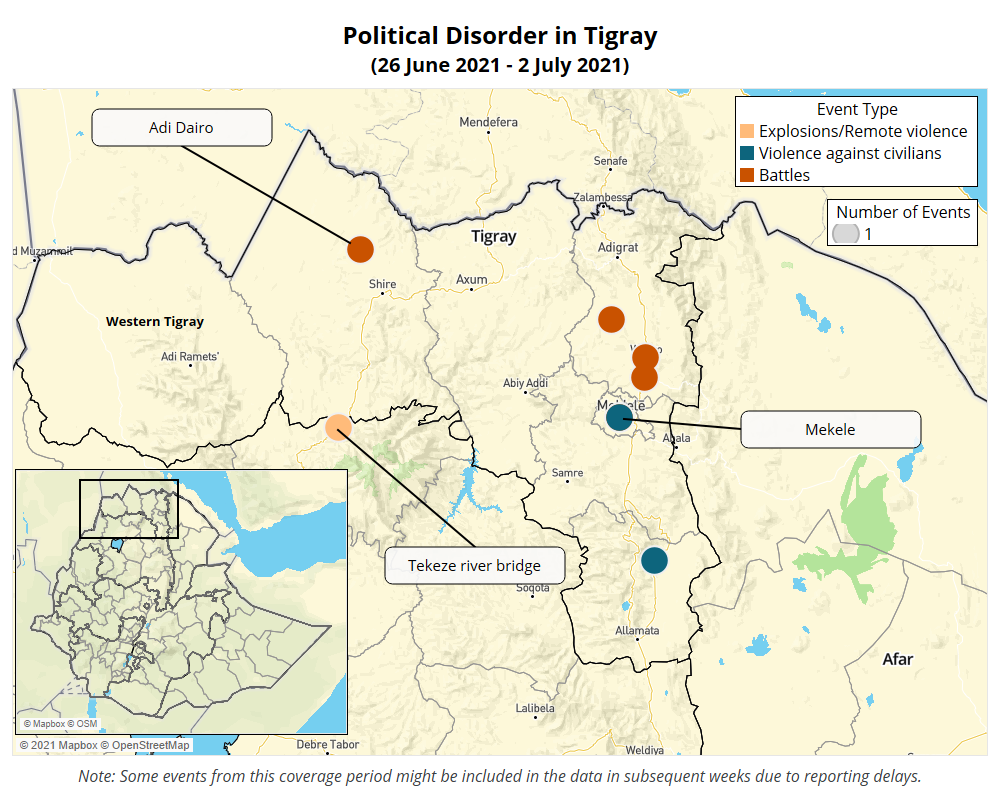 According to Ethiopian electoral regulations, the National Election Board of Ethiopia (NEBE) was expected to announce the official outcome of the election 10 days after voting had closed (The Ethiopian Electoral, Political Parties Registration and Election’s Code of Conduct Proclamation No. 1162/2019, Article 62). NEBE announced that 618 of the 942 election results for both the House of People’s Representatives and the regional councils have been sent to NEBE’s headquarters. However, a number of incorrectly filed disputes are preventing the NEBE from officially publishing voting tallies (NEBE press briefing, 29 June 2021). According to the NEBE, various political parties have submitted election-related disputes involving 160 electoral constituencies (NEBE press briefing, 29 June 2021). Consultations with the political parties who filed electoral disputes are ongoing, and legal experts have been hired to help parties re-submit their dispute claims in the correct manner.

Meanwhile, the Oromo Liberation Front (OLF) led by Dawud Ibsa and the Oromo Federalist Congress (OFC) announced the establishment of the Oromia Regional National Transitional Government (OLF, 1 July 2021; Addis Standard, 26 June 2021). It is unclear what this means as neither party controls any territory in the Oromia region. Both parties boycotted the election, citing pressure from the government. They have called for a national dialogue, the establishment of a transitional government, and for new elections to be held within one year (OFC Statement, 23 June 2021). The OLF party wing splinter led by Ararso Bikila has denounced the recently established Oromia Regional National Transitional Government, stating that transfers of power should occur through electoral means only (DW Amharic, 3 July 2021).

For a more detailed analysis from the ACLED EPO team regarding the post-election period, see EPO Weekly: 19-25 June 2021 and our latest special report: It Cannot Be Known: Ethiopia’s Election and Abiy’s Political Prospects.