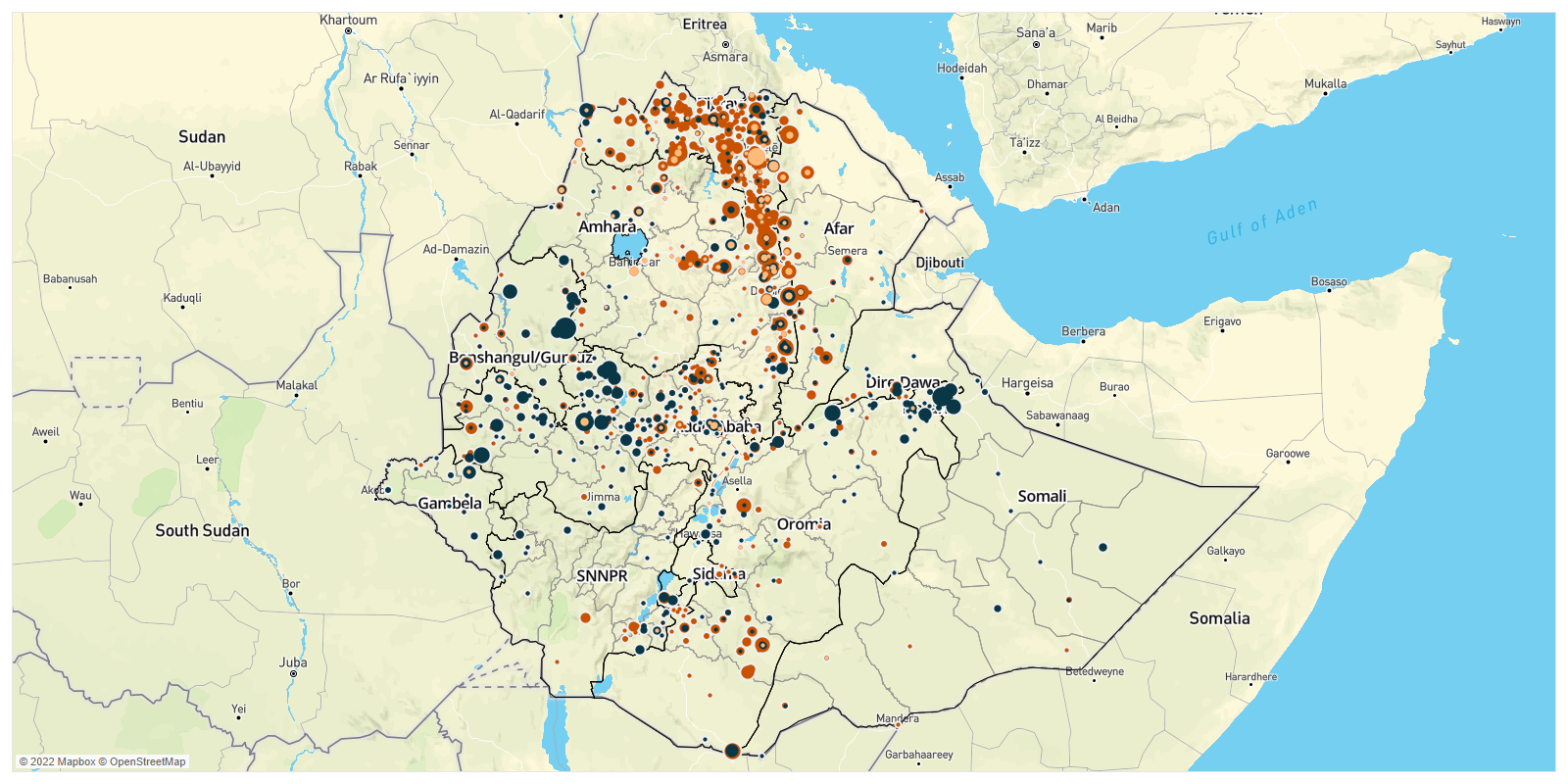 By the Numbers: Ethiopia, 25 June-1 July 20222Some events from this coverage period might be included in the data in subsequent weeks due to reporting delays. 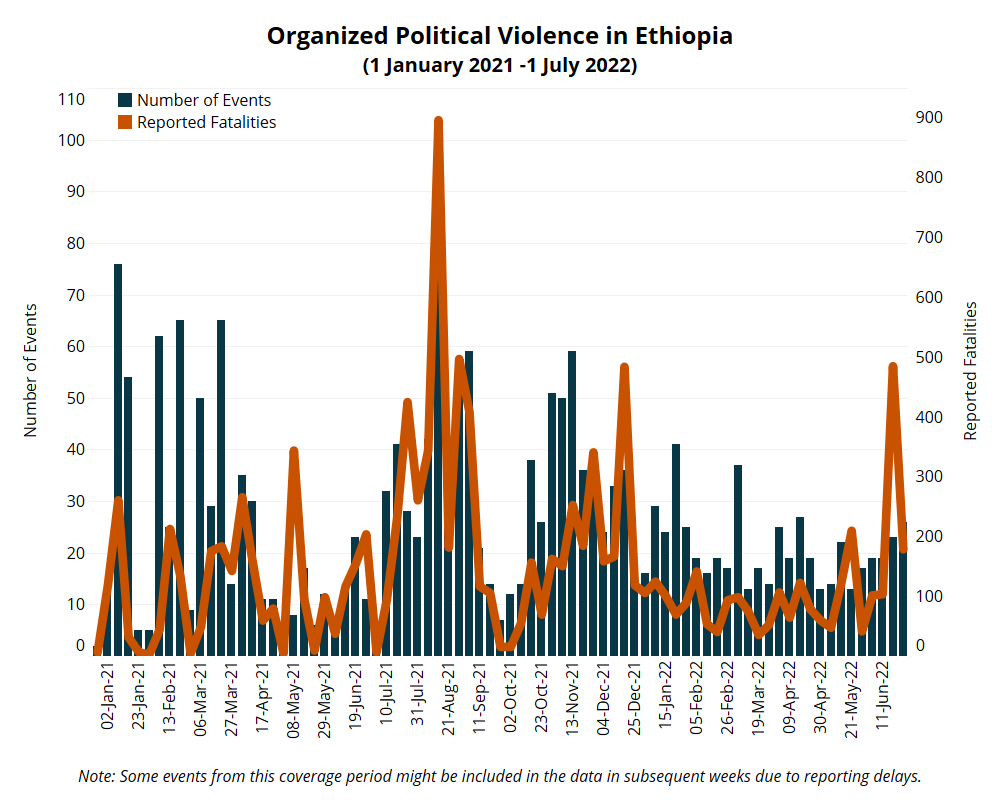 Last week, tensions escalated in different parts of the country. In Oromia region, armed clashes between Oromo Liberation Front (OLF)-Shane and government forces – Ethiopian National Defence Force (ENDF), Oromia regional special forces, federal police, and kebele communal militias – continued. Most events involving the OLF-Shane were recorded in North Shewa zone last week. In this zone, six armed clash events and four violence against civilians events were registered (see map below). From 26 June to 1 July, the OLF-Shane clashed with Oromia regional special forces and kebele communal militias in Hamuma Gindo (Racho/Erob Gebeya) kebele in Dera woreda in North Shewa zone. On the first day of the clashes, 13 militants, including a military commander of the rebel group, were reportedly killed. In response, the OLF-Shane started to target civilians in Hamuma Gindo, Ginde Berbere, and Babu Dire kebeles of Dera woreda after they found out that their military commander was killed by local militiamen. As a result, an unknown number of civilians were reportedly killed. The fighting that ensued between OLF-Shane and security forces over the next five days reportedly left 35 combatants, including 33 rebel militants and two kebele militiamen, dead. On 30 June, the OLF-Shane also attacked civilians in Medihani Alem kebele in Degem woreda in North Shewa zone. The group burned houses and abducted children. The casualties due to this attack are unknown. 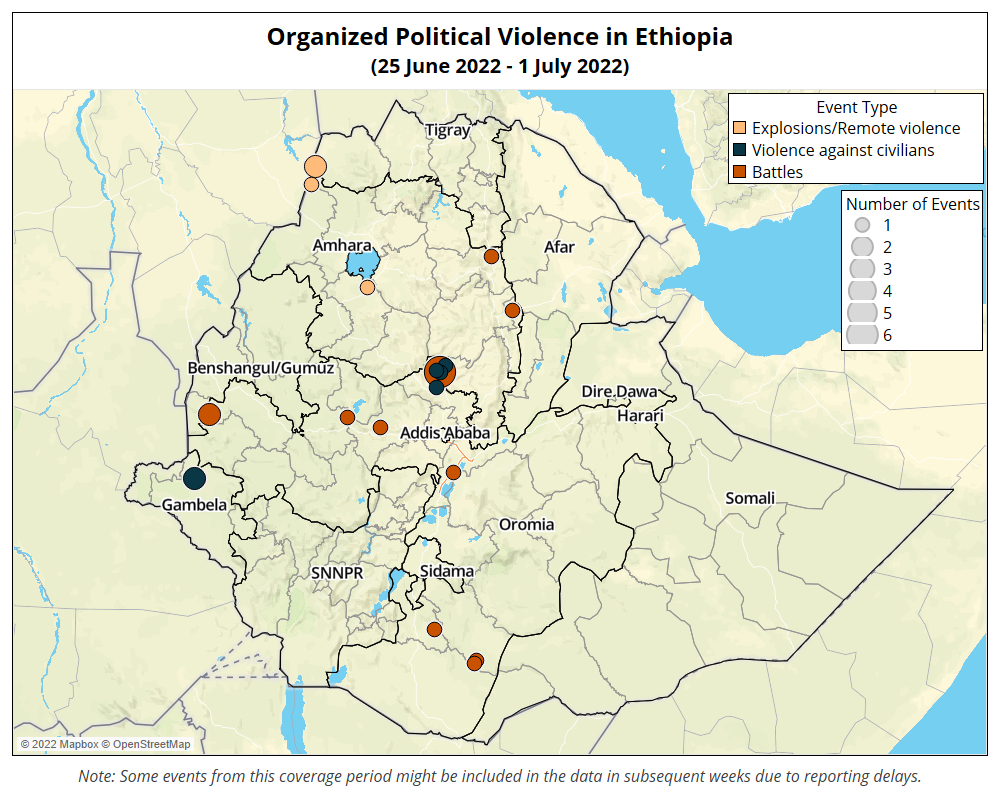 The OLF-Shane was also involved in another event outside Oromia region. On 27 June, OLF-Shane and Gambela Liberation Front (GLF) militants raided two farm camps owned by ethnic Amhara investors in Mera kebele in Itang special woreda in Gambela region and abducted 80 daily wage laborers. The rebel groups also burned down both camps and destroyed farm machinery. A few weeks ago, the two groups conducted their first known joint operation and clashed with government forces when they attempted to control the capital city of the region, Gambela city (for more details on this, see EPO Weekly: 4-10 June 2022 and EPO Weekly: 11-17 June 2022).

Since the Tole massacre in which the OLF-Shane killed hundreds of mostly ethnic Amhara civilians, tensions are rising in the country (see EPO Weekly: 18-24 June 2022 for more information). On 25 June, students of the Debre Markos University in East Gojam zone in Amhara region held a protest to denounce the killings of civlians in Tole. The same day, around 200 Addis Ababa University students also staged a protest in Addis Ababa, condemning the killings of civilians in western Oromia region. The protesters chanted slogans such as “death is enough” and “there is no Ethiopia to prosper while Amhara is dying.” In Amist Kilo area of Addis Ababa, federal police officers blocked the rally, beat protesters, and arrested five people while demonstrators were marching on the road from Sidist Kilo to Amist Kilo. At least three people were injured and admitted to Yekatit-12 Hospital. Similarly, on 27 June, Bahir Dar University students and health workers staged a protest in different locations in the capital city of Amhara region, Bahir Dar, to condemn what they say is “the attacks targeting ethnic Amhara civilians in western Oromia by the OLF-Shane and lack of protection for citizens by the government.” Amhara regional special police forces fired tear gas and beat protesters to disperse them. The government said the measures were taken to stop “infiltrators trying to use the protests as an opportunity to ignite violence.” The government Security and Safety Joint Task Force later released a statement warning university students that some media outlets were disseminating false information to incite unrest in the country (Ethiopian Federal Police, 27 June 2022). Nevertheless, demonstrations continued. On 30 June, residents of Shewa Robit town in North Shewa zone in Amhara region protested against the killings of civilians in Tole kebele. Although the protest ended peacefully, security forces arrested an unidentified number of people accused of organizing the protest. On 1 July,  some residents clashed with security forces when the administration refused to release the arrestees. At least six people were reportedly killed during the unrest (DW Amharic, 4 July 2022; VOA Amharic, 5 July 2022).

In the capital city of Amhara region, Bahir Dar, on 28 June, four explosions were reported in kebeles 3, 11, 13, and 14 around 7 pm. According to the police, six people accused of carrying out the explosions as well as another 14 people, who allegedly have links with the suspects, were arrested. Different weapons, bombs, and communication devices were also confiscated when police searched their residences. Police accused the arrestees of “terrorizing the public” (Amhara Media Corporation, 28 June 2022). On 30 June, the Bahir Dar City Administration Security Council declared a night curfew for Bajaj public transport vehicles (three-wheeled motorcycles) in the city for “security reasons” (Amhara Media Corporation, 30 June 2022).

In Addis Ababa, on 30 June, a group of rioters threw stones at and broke the windows of the Addis Ababa Islamic Affairs Supreme Council Office around Tor Hailoch area in Lideta kifle ketema. The federal police announced that an unknown number of people accused of being involved in the incident were arrested.

Lastly, security forces in Amhara region were asked by the regional government to be alert due to “signs of mobilization by the enemy” (Amhara Media corporation, 30 June 2022). Since mid-May, a “law enforcement operation” has been ongoing by the government in the region (see EPO Weekly: 14-20 May 2022 and EPO Weekly: 21-27 May 2022 for more details). Furthermore, in the last couple of weeks, several armed clashes between Tigray People’s Liberation Front (TPLF) and government forces and Fano militias have been recorded in areas located at the border of Tigray and Amhara regions. Further, TPLF leaders and the ENDF have indicated that if necessary, they are ready to defend against any attacks in the region (Tigrai Tv, 28 June 2022; FDRE Defense Force, 3 June 2022).

Tensions between the Sudanese and Ethiopian governments have escalated again over the past two weeks. The most recent escalation was brought on by an incident during which the government of Sudan accused the ENDF of killing seven captive members of the Sudan Armed Forces (SAF) and one civilian (BBC Amharic, 27 June 2022). The members of the SAF were reported missing after the SAF clashed with unspecified Ethiopian forces in an area east of Al Asira in Al Qureisha locality in the disputed Al Fashaga region on 22 June. A few days later, on 27 June, the SAF fired artilleries targeting Grar Wuha (Gelal Wuha) village in Mirab Armacho woreda in West Gondar zone in Amhara region. The next day, the SAF fired three artillery shells that landed on the Ethiopian side of the border with Sudan in Mirab Armacho woreda. One of the artilleries fell near St. Michael Church in Abderafi town. On 29 June, the SAF fired another round of artillery shells at unspecified locations on the Ethiopian side of the border. An unknown number of farms and agricultural camps were damaged as a result. There were no reported casualties due to these shellings.

The Al Fashaga border area has long been a contested territory between Sudan and Ethiopia. Negotiations in 2008 between the TPLF and Sudanese officials designated the land known as the “Fashaga Triangle” as legally Sudanese, but specified that ethnic Amhara farmers from Ethiopia would be allowed to continue farming there (Asharq Al-Awsat, 12 April 2020). Amid periodic clashes and attacks in the area since 2014, this arrangement was finally dissolved with the deployment of Sudanese troops in November 2020. These forces have been accused of driving out Amhara farmers — and Tigrayan farmers in northern areas of Al Fashaga – after Amhara forces re-deployed to assist the federal government in the war against the TPLF in northern Tigray region (Addis Standard, 20 May 2022; see the EPO’s Al Fashaga Border Dispute page for a more detailed analysis of the Al Fashaga border region conflict).

Clashes between Sudanese and Ethiopian forces generally involve informal and formal militias from Amhara region, including Fano militias, local militias, and special forces under the command of the Amhara regional state. Importantly, the most recent clashes occurred at a time of heightened tensions between Amhara ethno-nationalists with territorial ambitions and the federal government of Ethiopia. In mid-May, the government initiated a crackdown against Amhara ethno-nationalist organizations like Fano, arresting thousands of people (Reuters, 23 May 2022). While these ethno-nationalist organizations were aligned with the government throughout the conflict with the TPLF that began in November 2020, the recent realignment is likely to have some repercussions in areas like the border with Sudan. Certainly, conflict could escalate further if the government does not involve these groups in ongoing dialogue or consider their demands during bilateral discussions with Sudan. On 5 July, Prime Minister Abiy Ahmed reportedly met with Gen. Abdel Fattah Al Burhan, President of the Transitional Sovereignty Council of the Republic of Sudan, to discuss “current regional and bilateral issues” (Office of the Prime Minister-Ethiopia, 5 July 2022).

The situation becomes even more complicated amid the recent events in Oromia region. Massacres of ethnic Amhara civilians by militants from the OLF-Shane – which the government accuses Sudan of harboring – have occurred in areas of western Oromia. The most recent massacre occurred in an area located less than 150 km from the border with Sudan (BBC Amharic, 5 July 2022). The government regularly reports incursions from Sudan by militants linked to groups in Benshangul/Gumuz region and the TPLF.

Diplomatic issues between Ethiopia and Sudan are often over the building of the Grand Ethiopian Renaissance Dam (GERD), which began hydroelectric production in February this year (Al Jazeera, 20 February 2022). The Ethiopian government is preparing for a third round of filling the dam during the current rainy season, which is opposed by both Sudan and Egypt who accuse the Ethiopian government of acting unilaterally. While diplomacy is ongoing, the presence of non-government forces and outside factors complicate talks and threaten further escalation.